WordsWest Literary Series is curated by poets Katy E. Ellis and Susan Rich, and novelist Harold Taw. All three live in Seattle, where they came together over their parched need for a reading series in their community of West Seattle. Ellis is the author of three chapbooks: Night Watch (winner of the Floating Bridge Press 2017 Chapbook Competition), Urban Animal Expeditions (Dancing Girl Press, 2013), and Gravity (Yellow Flag Press, 2015). Below, she writes about the inventive format of the WordsWest Literary Series and how it played out at an event last fall with P&W–supported writers Robert Flor and Roberto Ascalon. 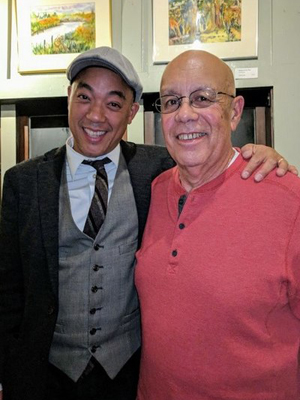 WordsWest Literary Series—now in its fourth year of programming—was honored to celebrate Filipino American History Month by welcoming two outstanding local writers of Filipino descent, Robert (Bob) Flor and Roberto Ascalon, to the stage. As cocurator Harold Taw mentioned in his introduction, both writers are “Uncle Bobs” in a culture that gives great respect to the words and lessons of previous generations, and that acknowledges the importance of family and really good food!

One of the unique things about WordsWest is its trademark “braided” reading format, where writers take turns reading in short intervals. Both audience and readers get to experience a sense of spontaneous collaboration on stage. (It’s a “living anthology” of words unfolding in a never-to-be-duplicated fashion right before your eyes!) So, Flor and Ascalon traded off reading their poetry in five-minute segments, weaving their poems together with fascinating connections of common history that branched into current themes of what it means to be “home and away” in this country. 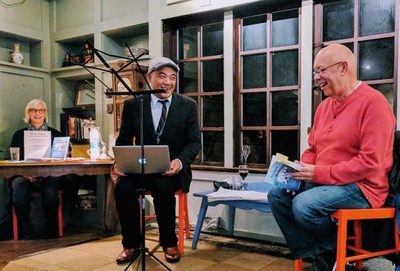 Roberto Ascalon was a stunning reader. The audience was on pins and needles as he took us into a Filipino fish market full of magical sensory images and strong characters. His love poem moved us with its unique form that didn’t quite rhyme, but felt like a song in its turning back and repetitions, and gorgeous images of seeds and growing. Bob Flor read from his chapbook Alaskero Memories (Carayan Press, 2016) about life in Alaskan canneries in the 1950s and 1960s. It is invaluable to have someone like Flor share his past experiences not only as a Filipino American with current ties to the Philippines, but as an older gentleman with an eye for details that only a poet can put down on paper. In one touching moment on stage, when the writers first traded turns at the mic, Ascalon acknowledged Flor’s age and life experience, and noted how honored he was to be reading with a Filipino elder. It was a lovely, intimate exchange between writers, between their poems.

Another unique part of a WordsWest Literary event is the West Seattle Favorite Poem Project, wherein we invite a member of the West Seattle community to share a favorite poem and tell us why it’s a favorite (think Robert Pinsky, U.S. poet laureate 1997–2000). On October 18, we heard a favorite poem from Alexis Acciana of Reading Partners, an awesome organization that connects volunteers with kids who struggle with reading. Acciana gave us a lively, lovely reading of Billy Collins’s poem “On Turning Ten.” The favorite poem portion of WordsWest has been a great way for people who don’t usually connect with poetry to get involved in the literary arts (and to promote their local business or to raise awareness of their cause).

Our WordsWest “braided reading” format, our dedication to inviting writers of diverse experience and cultural background, the cozy, one-of-a-kind coffeehouse atmosphere at C&P Coffee Company, community participation, and an audience now reliant on monthly literary nourishment has made WordsWest an ongoing success!

Support for Readings & Workshops in Seattle is provided by an endowment established with generous contributions from the Poets & Writers Board of Directors and others. Additional support comes from the Friends of Poets & Writers.