At first we were scattered, sitting at separate tables. Then we joined together in a circle. 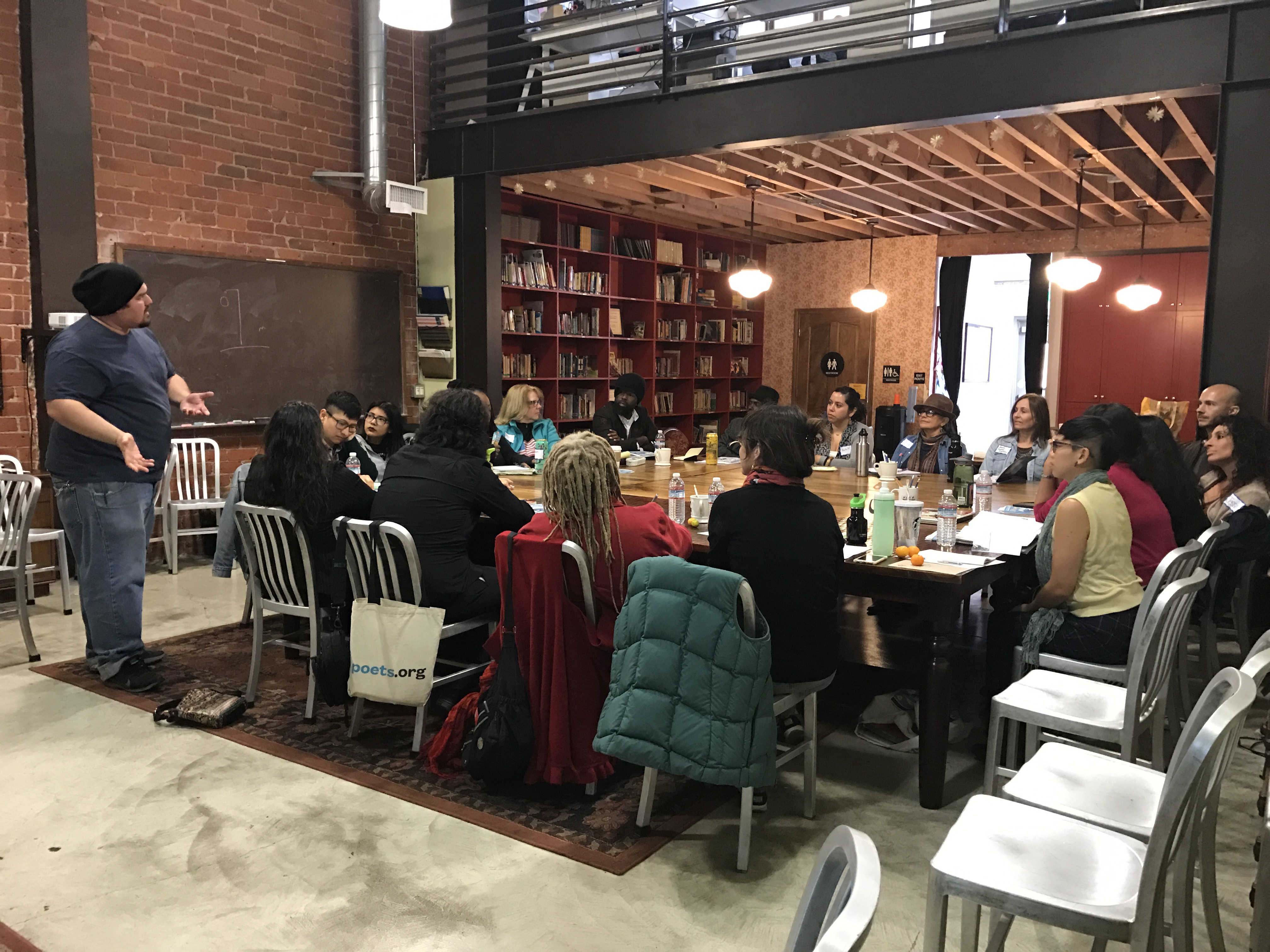 The first writers to take their places were Sarah Rafael Garcia and Marilynn Montaño of Barrio Writers, a nonprofit reading and writing program that empowers teens through creative writing. Garcia and Montaño rented a car and drove from Santa Ana to Los Angeles, about an hour drive. Both have been recipients of Readings & Workshops (R&W) grants for their work with Santa Ana’s youth.

The next person to join the circle was Oshea Luja of Still Waters, a poet and teacher supported by the R&W program for facilitating creative writing workshops with elders via the organization EngAGE.

Soon to join our circle, all the way from Riverside, was Angela Peñaredondo, who took part in the R&W program’s Intergenerational Workshop Exchange as a workshop facilitator for veterans and their family members at the Filipino American Service Group.

We gathered in the workshop space at 826LA in Echo Park for Poets & Writers’ Workshop Leaders Retreat, an annual half-day retreat where teaching artists share resources, best practices, and writing prompts, and write and break bread together. This past January marked our seventh retreat in Los Angeles. Last fall, we held our first retreat for teaching artists in the Bay Area.

In addition to expanding and solidifying the reach of the R&W program, these retreats enable us to further our support of teaching artists who work with underserved groups, to give them the opportunity to network with one another and strengthen their practices, and to honor them both as teachers and writers by spending time writing to each others’ prompts. “It can be isolating as a contractor and writer, so it is impactful to make such contact and connection with others doing similar work. It can inform my practice in a multitude of ways and offer personal support for this challenging work,” wrote one attendee.

This year’s retreat was enriched by a presentation from charismatic teaching artist Frank Escamilla, who works with at-risk youth and is outreach coordinator for Street Poets Inc. Escamilla linked his experiences growing up in the East Los Angeles neighborhood of Boyle Heights with his current teaching practice. He recounted how having to share a room with five others taught him early about “being in community” and described how he could count the number of gangs he had to walk through to get to school. As a youth he felt called to start his own gang to gather people together, to protect each other. Later, he realized that his gifts could be used in better ways, which led him to become a poet, performer, and teaching artist—one who initiates young people into the healing practice of writing.

Escamilla shared with his fellow teaching artists some of the techniques he uses to reach this vulnerable population. He addressed questions like: How do you create a safe space within ten minutes? How do we search for the gift within these wounds? How do you deal with silence? How do you offer criticism? Attendees devoured Escamilla’s pearls of wisdom, asked questions, and shared their own methods. We talked about the Native American practice of Council in workshops, African traditions, and how words “can be like bullets or they can be like seeds.” We sat together and wrote from a prompt taken from Audre Lorde: “What do you need to say? [List as many things as necessary],” and shared our responses.

To close and release the circle, P&W program associate Brandi Spaethe read from an exquisite corpse written by the group during the retreat:

Our children will witness the power of our voice, and carry it on
Under their arms they will carry the future like origami, sharpening their tongues
Every breath a fire becoming movement 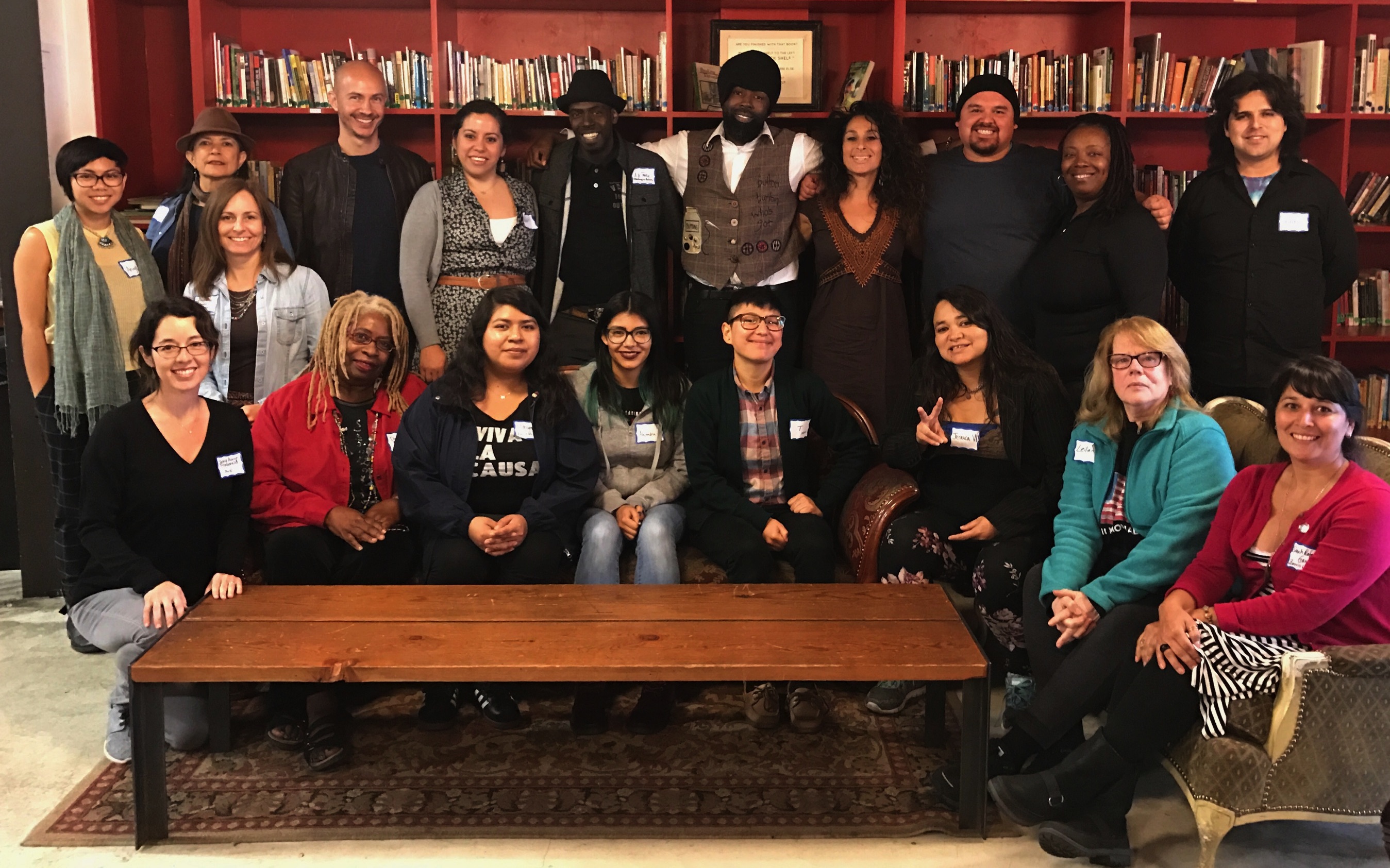 The Workshop Leaders Retreat is made possible by support from the California Arts Council, a state agency. We would like to thank 826LA for consistently giving this retreat a home and all the teaching artists past and present who have participated.