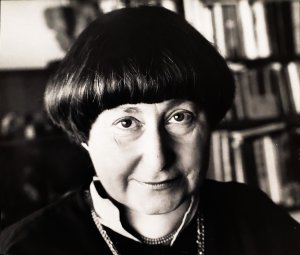 Harriet Zinnes (April 18, 1919-November 30, 2019), who was an American poet, fiction writer, translator, art critic, literary scholar and professor emerita of Queens College died in her sleep on November 30.  She was 5 months shy of 101.

As the author of eleven books of poetry, two short story collections, the editor of Ezra Pound’s art criticisms (Ezra Pound And The Visual Arts, New Directions, 1980), translator of the poems of Jacques Prévert (Blood & Feathers, Schocken, 1988; reprinted Moyer Bell, 1993), literary critic (The Nation, Chelsea, Denver Quarterly, Colorado Review, Hollins Critic, Philadelphia Inquirer,  among many other magazines), associate editor at The Harper’s Bazaar, Zinnes was well-known and respected within the poetry world. Associated with poets such as Karl Shapiro, Delmore Schwartz, Alan Ginsberg and her close friend and mentor the writer Anaϊs Nin, as well as with the Beat and Language Poets, Zinnes’ poetic and critical output was concerned with a complex transition between the aesthetic and social tensions associated with high modernism and postmodern literature and art.

"Harriet Zinnes was a lynch-pin of American poetry and poetics. In her poems and in her critical writings, she blazoned--ever calmly, ever tenderly--passional contact between the visual and the verbal, between intimate whisper and the wide, wild act. As long as she was with us, the heady days of the New York School, of Abstract Expressionism and Gestural Realism, could never end. In her every utterance, the cross-talk in and around MOMA and amongst the flowers springing out of sidewalks made constant chorus. Harriet Zinnes was the conscience and clerestory of our brightest avant-gardes. She will be keenly missed."

When Zinnes was 10 years old her mother had her write the following note to herself: “I must never make myself dependent on a man.”  The career of Harriet Zinnes is an honor to this pledge.  Long before the phrase “women’s liberation” had entered common parlance, Harriet Zinnes had attained active publishing and teaching careers, and become a fixture among the downtown NY School poets.  So powerful was her voice that she became a role model not only for younger women poets and students, but even men.  As one of her students, Professor Jeffrey Spielberger, writes, “I loved Dr. Zinnes, and so did everyone else in the creative writing and modern poetry courses we took with her in the 1964-65 academic year [at Queens College, CUNY]. It was a long, long time ago—but still I remember her positive energy, cheerfulness, and kind support and gentle criticism she gave to a bunch of eager kids…. Without knowing it, she was one of a very select handful who guided me in my half century as a CUNY English professor.”   Evan Zimroth, a novelist and Queens College colleague several decades younger than Zinnes, says “[Harriet] had a kind of 'aura' about her, and I think it was just her warmth and her boundless social and intellectual energy.”  Another younger colleague, poet Anthony O’Brien, writes, “She made that arc publicly through the world, and taught… with such a sense that what we did had an essential rightness to it. She affirmed and reaffirmed what we did with poetry.”

Zinnes left in peacefully in her sleep, with very little suffering.  The whole family except her granddaughter who lives in Singapore was there.  The night before, she listened closely to her son playing a Brahms intermezzo on the piano, and when he had finished, she said to him in her self-assured way, “That was very enjoyable, but it needs a bit of practice.” (The whole family laughed, because she was so right), and the family played a silly game at the dining room table after dinner.  On her way up to bed – she walked up a flight of stairs each night –  she insisted that her latest notebook, the one her son had just picked up in Borneo, be right next to her in case she awoke in the middle of the night to write a poem, a habit she’d had since childhood.

Harriet Zinnes’ writing, though informed by many disparate traditions and styles, demonstrates the various currents and trends of the American literary tradition in the 20th century, from the “found poem” à la William Carlos Williams and Marcel Duchamp, to the ekphrastic verse, to the “proprioceptive” “composition by field” championed by Charles Olson in his essay “Projective Verse,” to the more cerebral poetics trends of the 1960s (specifically Robert Smithson’s writing about entropy and site-specific art). Thomas Fink, poet and critic, writes, “Zinnes’ work happily blends the influence of French Symbolism, French surrealism, Steinian reiterations, stately cadences and heightened speech of high modernists like Eliot, Yeats, and Stevens, and a dash of Ashbery’s disjunctive cliché-tweaking. The great old themes of love, mutability, war, and communion/alienation, and the attempt at oneness with nature (especially birds) appear, but minus old platitudes.”   Zinnes writes, echoing an embodied, Olsonian practice:

“Yes life is loss, but for the writer, there is the joy of the very process of creation. Out of loss, out of experience, sad or joyful, there is always the possibility of creating form. I am no formalist, for each poem, it seems to me begs its own form, its own music too. And without music, lyrical, cacophonous, or strangely rooted in prose, there is no poetic line. Therefore, the freedom that comes from the initial moment of word upon word, the outgrowth of the feeling derived from the impulse of the word, from the cumulative of experience lodged in the intense architectonics of memory. There forms the necessary order – becoming, if one is lucky, a singular vision. Finally I should add that I need the sensuous experience of the visual: paintings are necessary feasts to me. So from the eye, from the ear, to the word in multifarious form.”

Zinnes lived poetry, and lived for the word.  Poet and scholar Charles Molesworth writes, “Most of us live in complications and networks of forces and longings. We call this life or reality. But Harriet Zinnes lived much of her life beyond ordinary reality – she lived her life as a trust in poetry. A higher ideal, which she loved and laughed with, knowing poetry would never leave her.”  Zinnes trusted the word to such a degree that her family remembers her making many foolish mistakes, such as when she returned from grocery shopping astonished that the tomatoes, clearly labeled “fresh tomatoes,” were in fact rotten.  She thought so quickly that she couldn’t write fast enough, giving herself and others the arduous task to decipher her scribbled handwriting into actual sentences.  Fortunately she was a good typist.  And though she was frequently challenged by the physical world, her sheer perseverance led her to “learn” the computer at the age of seventy and email at the age of eighty.  (True confession: She never understood the copy and paste commands, so always deleted and retyped as necessary!)

That skillful typing ability came in handy when the Romanian composer Gheorghe Costinescu asked her to “play” the typewriter at his debut recital at the MacDowell Colony, with Leonard Bernstein in the audience.  Because Bernstein’s letter to the Immigration & Naturalization Services was instrumental in helping Costinescu gain his US citizenship, to this day, Costinescu credits his good friend Harriet Zinnes with helping him become American.

Zinnes was also a member of the Association of International Art Critics and a formidable art critic, writing for The Nation, NY Arts and other journals.

Harriet Zinnes was born Victoria Harriet Fich in Hyde Park, Massachusetts, to Sara (Goldberg) Fich and Assir N. Fich, a Russian immigrant from a long line of musicians who at one point sang tenor for the Metropolitan Opera.  Zinnes, who began writing poetry at age six, went to Washington Irving High School (then a fine academic school), became editor of the school paper--and wrote poem after poem.

Prof. Zinnes received her Bachelor’s degree at Hunter College (now Hunter College of the City University of New York) in 1939. It was while Zinnes studied at Hunter College that she became more involved in the New York art and poetry scenes, becoming close friends with writer and editor Daisy Aldan who introduced Zinnes to Anaϊs Nin, putting in motion a deep friendship and intense correspondence that lasted until Nin died in 1977.

On September 24, 1943, Zinnes married Irving I. Zinnes (March 21, 1916 - November 17, 1979), and completed her Master’s degree at Brooklyn College (now Brooklyn College of the City University of New York) in 1944. She and her husband went on to New York University for their respective doctorate degrees in English and theoretical physics. She received her Ph.D. in 1953. Her dissertation, on Alexander Pope’s long poem The Dunciad (1743), became a major formal influence on Zinnes’s own poetic output, even as a force to work against. As novelist Eric Williamson puts it, “Whereas Pope’s work is limited by the notion of form in the Neoclassical tradition, Zinnes’ work is free of form and limited only by the imagination.”

Zinnes continued writing poetry until the end of her life.  Of her late work from her 90’s Burt Kimmelman, poet, essayist and editor, writes in a forthcoming article, “Her late poems—their ethereal, sprightly, fleetingly brilliant statements seeming to have come from beyond the veil—are exciting in their exquisite lightness yet intrigue, which doesn’t dissipate. Zinnes’ last poems are supremely graceful, intelligent, paradoxically profound in their sheer defiance of gravity.”

Zinnes is survived by her two children, Alice, a painter and a professor of studio art at The Pratt Institute and NYC College of Technology, CUNY, and Clifford, a Ph.D. international development economist and senior fellow at the NORC at the University of Chicago, and Clifford’s three children Anais (named after her grandmother’s friend Anaϊs Nin), Sebastian and Roman.

A memorial service will take place at Poets House in New York City on Saturday, March 7 from 6:00-8:00pm.

Gives readings:
No
Travels for readings:
No
Born in:
Hyde Park, MA
Massachusetts
Raised in:
New York, NY
New York
Please note: All information in the Directory is provided by the listed writers or their representatives.
Last update: Jan 15, 2020
X