Bobby González is a nationally known multicultural motivational speaker, storyteller, and poet. Born and raised in South Bronx, New York, he grew up in a bicultural environment. González draws on his Native American (Taino) and Latino (Puerto Rican) roots to offer a unique repertoire of discourses, readings, and performances that celebrates his indigenous heritage. 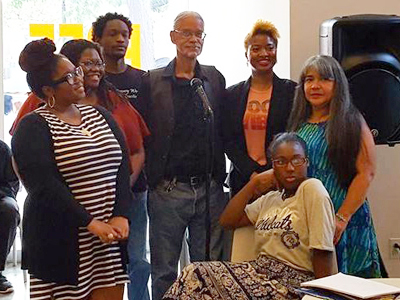 At the beginning of the first in a series of six “Spoken Word 101” workshops at the Bronx Museum of the Arts, I made it clear that I wasn’t going to teach anyone to be a better poet or spoken word artist. We were gathered to support each other as we explored the world of spoken and written word. For inspiration we read and discussed some of the verses of Aja Monet, Charles Bukowski, Nanao Sakaki, Sonia Sanchez, and other authors. Also, every session included the viewing of a YouTube video of these poets reciting their works.

This was the fifth year of the summer workshops at the Bronx Museum, and the participants quickly realized that we were creating in a safe zone. They wrote and shared poetry that disclosed family secrets, personal tragedies, racial angst, and heroic triumphs. The writing and the sharing was an integral part of their ongoing healing process. Tears were shed, voices were raised in anger, and a couple of emotional recitals were reciprocated with huge hugs.

Each session of “Spoken Word 101” resulted in the formation of a family that transcended reading, writing, and performing. Like all families, losses were experienced. Within the last few months, two members of our family passed away. Steve “Latin Gorilla” Lewis and Robert Waddell both died suddenly. We paid tribute to them in open mic readings and reminded ourselves that their thoughts and spirits will live forever in our hearts and in the poetry they left behind.

Through “Spoken Word 101” we all relearned language, dramatic articulation, and the wonder of allowing ourselves to bare our vulnerabilities with friends we barely met but already knew we could trust. That’s the power of poetry. The Poets & Writers’ Readings & Workshops program provides vital financial support for a literary series in an underserved community that is greatly appreciative of this empowering experience.