Alicia Partnoy is a poet, translator, and survivor of the Argentine genocide. She is best known for her memoir, The Little School: Tales of Disappearance and Survival (Cleis Press, 1998). Her most recent book is the poetry collection, Flowering Fires [Fuegos Florales] (Settlement House Books, 2015), and other works include Little Low Flying [Volando bajito] (Red Hen Press, 2005), Revenge of the Apple [Venganza de la manzana] (Cleis Press, 1992), and with Gail Wronsky, So Quick Bright Things [Tan pronto las cosas] (What Books Press, 2010). Partnoy teaches at Loyola Marymount University in Los Angeles, and presides over Proyecto VOS-Voices of Survivors. 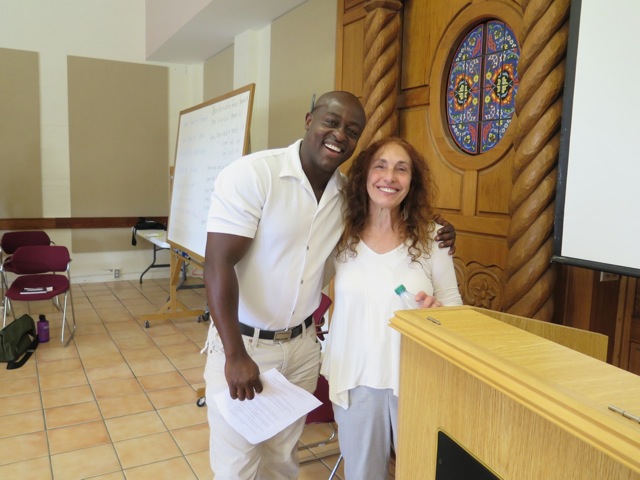 This past September, I had the opportunity to sit in on a bilingual English/Spanish writing workshop taught by P&W-supported poet and memoirist Alicia Partnoy. The workshop was part of a retreat held in Malibu, California, by Community Initiatives for Visiting Immigrants in Confinement (CIVIC). CIVIC is a national nonprofit organization that works to end the isolation and abuse of people in U.S. immigration detention through visitation, independent monitoring, storytelling, and advocacy.

The retreat's workshop brought together CIVIC staff, volunteer visitors from nearly twenty states, and people who were previously held in U.S. immigration detention to help them tell their stories. It was a day of personal exploration and joining together in passionate commitment to a cause.

"Writing about the abuses against us was the only way to let it out," recounted Sylvester Owino, who was detained by U.S. immigration for nine years before regaining his freedom.

Owino's statement, which came after a group writing exercise, echoed what workshop facilitator Partnoy described earlier in the day—after she "disappeared" and was imprisoned in Argentina, and having arrived in the United States as a refugee, she felt desperate because no one knew the stories. She wrote her memoir, The Little School: Tales of Disappearance and Survival, and earned a PhD, out of desperation—to have the stories told, to show the suffering she went through and the suffering of others. "We cannot speak for others if they die," she said, "we speak without them."

Partnoy spoke of "testimonial texts" and "testimonial value" and explained that stories, poems, pictures, and paintings are all "texts." Novels can be written based on testimonials. Poems can tell a story. If a letter was found in the pocket of someone who was killed while crossing the border, it has testimonial value.

I wasn't sure how everyone present was drawn to the cause, but more than a few had personal connections, whether it had been a husband, a mother, or other family member who was or is currently detained. Partnoy made the point that "when a family member is imprisoned, the whole family is punished." And she noted: "Children imprisoned with parents is the current harrowing situation."

Your mother isn't in prison
your mother has
birds in her blood,
grates and bars
don't detain her
nor padlocks,
nor is she in prison,
nor has she left you.

This is how Partnoy's incredibly moving poem "Lullaby Without the Onion" from her most recent collection, Flowering Fires [Fuegos Florales], begins. Partnoy sang her poem, evoking Miguel Hernández's famous poem, which was set to music, "Lullaby of the Onion" [Nanas de la cebolla]. She also shared work that her mother, painter Raquel Partnoy, and daughter, poet Ruth Irupe Sanabria, have written about their experiences.

As retreat attendees wrote in groups on a palabrarma (word weapon) prompt (credited to Chilean poet Cecilia Vicuña) using the word solidaridad (solidarity) supplied by Partnoy, emotions ran high and tears and knowing nods were exchanged as they began the necessary work of sharing their stories and experiences:

"Who am I without you?" read one participant.

"Lament shared is hope given?" questioned another.

"A hand raises to meet the hand behind the wall."

The hope is for the work generated during this workshop to be published as an anthology—making it the first project to use the voices of detention visitors and formerly detained immigrants together, and giving unprecedented insight into immigration detention and the work of CIVIC. To learn more and support the creation of this compilation, please visit CIVIC’s website.

Major support for Readings & Workshops in California is provided by the James Irvine Foundation and Hearst Foundations. Additional support comes from the Friends of Poets & Writers.