Women's Stories From the Margins

Estevan Azcona, PhD, is director of MECA Presents, the arts and residency program at Multicultural Education and Counseling Through the Arts (MECA) in Houston, Texas. A former curator for the National Performance Network's Performing Americas Program, he has also served on grant panels for organizations including the National Association for Latino Arts and Culture. Azcona is an ethnomusicologist by training and also serves as Music Director for MECA's AfterSchool Arts program. Below, he blogs about a P&W–supported reading that took place on April 7, 2016. 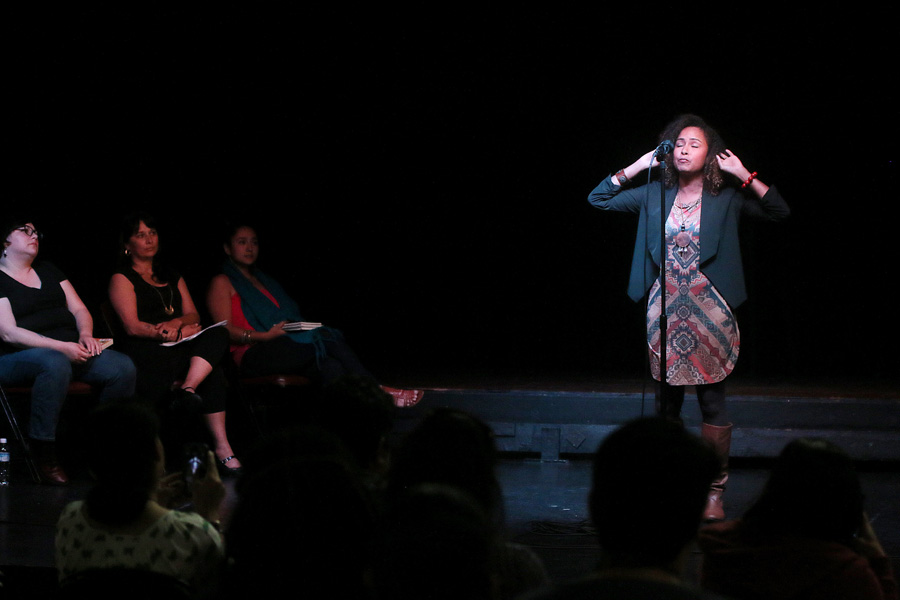 Multicultural Education and Counseling Through the Arts (MECA) is a Latino-based multicultural, multidisciplinary arts organization that has been serving low-income communities in Houston, Texas for almost forty years. Beginning in a local parish church to give "at risk" or "inner city'' neighborhood kids music, dance, and art classes after school and during the summer, MECA has since watched the inner loop of Houston change as gentrification played its part in the Sixth Ward neighborhood where the organization has always been located, as well as throughout the central part of the city, where it is becoming increasingly expensive to live. Instead of coming from down the block, or a mile or so away, families now bring their kids—some of them driving thirty minutes plus one way—to MECA from throughout the metropolitan area.

For some time now, Poets & Writers has been a welcome source of support for writers to come and read their work and give workshops to the kids, the families, and the public. Houston's first poet laureate, Gwendolyn Zepeda, is a MECA alumna from the Sixth Ward and has many times been central to bringing creative writing workshops to our students, with help from P&W, as have other local writers. As a predominantly performance and visual arts organization, this support has been critical in bringing letters into our programming.

In April of this year, we had the opportunity to present three Latina writers, each approaching their craft in different ways: local writer Jasminne Mendez is a powerhouse performance poet; Sarah Rafael García is a talented memoirist and youth writing advocate with her project, Barrio Writers; and Isabel Quintero is a gifted fiction writer who has recently garnered a lot of attention. We were lucky to have writer and poet, Edyka Chilomé, from Dallas, come to Houston to serve as emcee for the public reading.

When the authors came to us to do a project together, we were especially excited as the work of each of the writers eloquently addresses the experience of growing up and/or being Latina. While all youth from marginalized communities are challenged to have the opportunities other groups take for granted, at MECA we are not unaware of the obstacles for young women of color, and here was a great project to open the door for young Latinas to the work of these authors. Though we were concerned with turnout, as we do not often present writers, we had an audience of at least forty ready to hear the words and stories of this group of women, including a dozen or so youth who participated in the joint writing workshop. Virtually everyone stayed after the public reading to speak with the authors, buy books, and chat amongst themselves. And the sign was clear to MECA, do this again!