Christine Penney is newly retired. She is excited and daunted by discovering her voice again in writing through P&W–supported workshops at Goddard Riverside Community Center’s Senior Center in New York City, where she worked as a program coordinator for fourteen years. Many moons ago, she cowrote a one-woman show “Kaethe Kollwitz Presents a Brief History of Modern Art,” and performed it in New York City. Acting in theatre, television, and films in the San Francisco Bay Area and New York City spanned her early years. She raised a brilliant and deeply loved and admired daughter, Kalen Wheeler, in a railroad apartment on the Upper West Side, who is her greatest support. 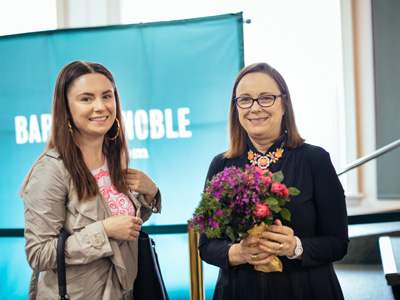 Poets & Writers began this event in 2001 to celebrate the work of elders and teens, who have participated in writing workshops supported by the Readings & Workshops program throughout New York City. It began in a community room at Goddard Riverside Community Center’s Naturally Occurring Retirement Community program with ten readers and has grown to thirty-five plus readers.

For fourteen years I worked behind the scenes as a program director at the Goddard Riverside Community Center. From the time I was hired to the time I retired, Poets & Writers has supported writing workshops with seniors in this community; inspiring writers of a population seldom heard, whose lifetime of experiences could just as well have dissolved into airy nothing, if not for these workshops.

I would peek through the small window of the art room intrigued by these writers and their rapt attention as they listened to each other’s work. Outside looking in through the door, I could feel their churning minds, imagination, and their deep desire to tell their stories before time ran out. I longed to be among them.

Some highlights included a sestina of thumping political injustice by Suzanne Pavel, and lines of poetry from others. In “As a Teacher, I Use My Heart,” Brendan Gellette wrote: “I pull it out in the classroom, leave it on the table.” “Another heart vanished into a steamy mirror, as her father entered,” is how my piece “Bath Time” ends. “You’ll thank me for this some day. And took out his belt and buckle,” wrote George Schirmann. In I. S. Jones’s poem (to be published in Anomaly, formerly Drunken Boat) she wrote: “You break me with love because this is your inheritance, a family heirloom.”

Protesting vaginas and slamming sexual confusion rapped out in beats, contrasted with the quiet rhythmic grace of Tony Morris’s piece: “Behold, time is a precious thing. But when you must, answer the call.” Even Marilyn Monroe showed up in a fictional piece by Kathy Wilson, where Marilyn phoned another actor humbly asking if he was available to rehearse a scene for a Lee Strasberg class.

Young or old, we took our moment, whether unapologetically flinging it out with the raw, passionate urgency of youth, or tiptoeing softly to the end, quietly speaking our truth. The style did not matter. Let no one shut us up about what we see or what we feel, no matter what age, what race, what country, what disability, or sexual orientation we have.

“It made me feel alive, brought me back the anger and injustice I felt as a young adult. Bravo to the young folks’ vulnerability and grit,” said one senior.

“I think it’s a fantastic idea that P&W brings together this wide range of poets in terms of age, race, gender, and life experience. As an emerging poet, it gives me a lot of hope to read alongside seasoned poets because in this particular craft, we play the long game. It gives me hope that if I stay true to myself and what I need out of my work, that I will be alright,” said I. S. Jones.

To return to my creative core is a blessing and the best part is finding a community of like-minded people to share this new discovery with. Thank you to my friends in the writing group, to our loved and trusted workshop facilitator Elena Alexander, and to Bonnie Rose Marcus, director of the Readings & Workshops (East) for inviting me to write this blog. And thank you Poets & Writers for this gift, offering us a platform to express ourselves, listen to others, and learn!