For our nineteenth annual roundup of the summer’s best debut fiction, we asked five established authors to introduce this year’s group of debut writers. Read the July/August 2019 issue of the magazine for interviews between Ruchika Tomar and R.O. Kwon, Chia-Chia Lin and Yaa Gyasi, Miciah Bay Gault and Melissa Febos, De’Shawn Charles Winslow and Helen Phillips, and Regina Porter and Jamel Brinkley. But first, check out these exclusive readings and excerpts from their debut novels. 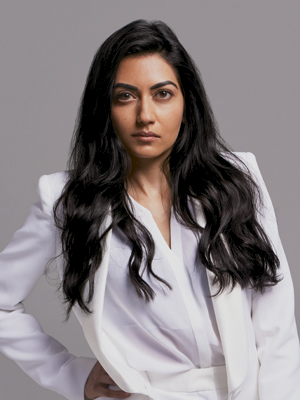 A Prayer for Travelers
Ruchika Tomar

There were three names listed under Cruz in the phone book, but I didn’t bother trying any of them. Ask Flaca. If Lourdes had been hostile to my call, Flaca, I knew, would hang up the minute she heard my name. I had always considered Penny their favorite; she was always the most admired in school, the one other girls strove to emulate. But Flaca was their backbone, the mainstay, the friend who dispensed favors and counsel. I decided to look for her in the one place I knew she would eventually be forced to return.

It was already dark when I left the diner, but I could have found my way to the palo blindfolded, even with all light stripped away. The Cruzes’ panadería was a flamingo pink storefront at the southernmost corner of a petite arc of businesses that included, among other things, a smoke shop and a laundromat. I parked the truck and climbed out as the barber was closing up for the night, unplugging the red and blue helix in the window, locking the door, rolling a hatched metal gate over the glass. He locked it, rattling the grille to make sure it was secured. Only the bakery stayed open late enough for workers returning from Sparks and Tehacama to drop off their lunch pails and tool kits at home, hunt their children from varied backyards, and corral them to the bakery for tortas and Cokes. As I walked to the entrance, a large blue van pulled up to the curb, unloading a dozen women in identical pressed white uniforms. These women were Pomoc’s illusionists, soon to be ferried out to office buildings and casinos and hospitals in southern cities, armed only with plastic bottles and brooms to toil unseen, tasked with erasing our collective past. I followed them inside and lingered near the wall opposite a glass case full of pan dulces tucked into neat, full rows. The women placed orders for tacos de piña, puerquitos, and coffee strong enough to power them through the evening into the pardoning dawn. Behind a small screen that separated her from customers, Maria’s short, corpulent figure bent to the glass case, shaking out one paper bag after another.

When I was a child, Lamb had brought me here so often that Maria often emerged from behind her veil‑like screen. She clasped me against her supple bulk, flattening dexterous, flour‑dusted fingers across my eyebrows and down the dark tails of my schoolgirl plaits, humoring Lamb with his awkward gringo patois while checking for my growth spurt that never seemed to arrive. Even after all these years her face was still full, a few strands of silver in her high, tight bun catching in the light. When the last of the uniformed women left, I unlatched myself from the wall and stepped up to the counter, searching Maria’s expression for some sense of recognition, an acknowledgment of the pigtailed tomboy who loved her. She nodded at me through the screen. “¿Qué quieres?”

“No.” Her reply was sharp, as if this was a question she’d been asked too often. Flaca’s business was growing, and it wasn’t hard to guess how many others might have shown up in recent months, seeking a dispensary.

“I used to come here.” I held out my hand flat at my chest, indicating a child’s height. “This tall, overalls. I came with my grandfather. We sat over there.” I pointed to the corner table, the hard plastic chairs. She shrugged.

“You don’t remember me?” My voice sounded more desperate than I intended. What if I split my hair in braids again, if Lamb were beside me, if I clung to his rough hand the way I had then? Instead I pointed to a row of pink conchas behind the glass, as if nostalgia might stir Lamb’s dwindling appetite. “Cuatro, por favor.”

She reached for a pastry box and laid the conchas down like sleeping children. I paid and on my way out, held the door for a father shepherding inside twin girls, the pair of them in light‑up princess sneakers and vague, kittenish smiles. Outside, I stopped at the truck and slid the pastry box on the hood to fish the keys out of my pocket when out of the corner of my eye, I saw a mouse dart out from underneath a nearby car, scurrying along the side of the building to the dumpsters crowding the small back alley. Lamb and I had wandered there more than once to discard our trash, and I knew at the end of the alley lay the bakery’s kitchen where, during any weekday lull, Maria could be found chatting with any number of family members who cycled through to mix dough and answer the phone, transcribing elaborate cake orders. I settled the pastry box in the passenger seat of the truck before shutting the door and picking my way into the dark passage, edging past the dumpsters. Halfway down I could make out a square of light on the brick wall opposite, the top half of the kitchen’s Dutch door pushed open, giving off a backdraft of heat. I peeked in past the tall, silver rolling racks of pastries pulled away from the wall, the working counters covered with bags of yeast, mixing bowls, rows of sweet breads cooling on wire racks. A fan in the corner of the room rattled as it worked, its face pushed up toward the ceiling to keep from blowing flour into powdered mist. A slim girl, her back turned to me, pulled open the top door of an oven, sliding a baking tray inside. She shut it and moved to lean over the fan, shaking out the bottom of the tank top that clung to her, a red bandanna tying back her hair.

“Flaca,” I called her name softly. She made no movement to signal she heard, but a moment later, a familiar pair of hard, dark eyes pinned mine. She crossed the room and reached for the Dutch door, her face already forming a scowl. I took a step back, one foot into the dirt. A voice called out something indecipherable from the other room.

“Nadie, Mama,” Flaca called back. She jutted her chin at me. “What do you want?”

Flaca studied me with an expression I didn’t know how to read. She pushed the door open wider for me to catch, but once inside reached for me so quickly I didn’t have time to pull away. She caught my jaw in her firm grip, moving my face back and forth carefully in the light as if it were a ruby or disaster, something to be appraised. Her breath tickled my chin. This, the closest we had ever been to each other, even as girls.

“Penny didn’t do this,” she said flatly.

Flaca released me, moving away. It was twenty degrees hotter inside the kitchen, and the skin on my arms began to take on a thin sheen. The room smelled overwhelmingly sweet, the pastries baking in the double oven. I followed her back to the counter where she picked up a silver sifter, shaking powdered sugar over a rack of wedding cookies.

“Dime. You pissed someone off.” “That’s not what I came to talk about.”

“Oh? What does Cale want to talk about?” She set down the sifter and lifted the tray, sliding it onto one of the rolling racks.

“Penny never showed up to work last night,” I spoke to her back. “Maybe you’d know where she is.”

“But you’re always together.”

“Flaca, I went to her place. She didn’t answer. I used the spare. She wasn’t there but she left her cellphone behind. You don’t think that’s weird?”

“That Penny forgot her phone?”

“She didn’t forget it. And she hasn’t come back, not that I know of.”

I hesitated. All the drops Penny was making for her, the business Flaca would lose if Penny didn’t have it on her. There was no good way to deliver the news.

Flaca rubbed her face, smearing flour down her cheeks. The bandanna pulling back her hair brought her features into stark focus; the angle of her cheeks and chin, her nose a degree too sharp. I longed for Flaca’s mother to emerge from the front of the shop, to see mother and daughter standing side by side and compare their faces and hands, to ask how some things could be passed down so easily from one to another while other familial aspects were entirely betrayed.

“I didn’t know what else to do. Maybe it could help? I have a feeling—”

“Something could be wrong.”

“And what are the cops going to do?”

Flaca laughed. In all the time we had been in school together, I couldn’t recall the sound. I had never heard it, or I had heard it too often; it had dissolved into the childhood soundtrack of playground sounds along with the recess bell, the squeak of swing sets, the rhythmic whip of jump ropes slapping the blacktop. It cracked her face wide open, making her appear less birdlike, revealing a pliable warmth: a secret she had kept hidden inside herself all this time.

“They’re probably going to call you,” I said.

“The cops aren’t going to do shit.”

“Relax. Penny’s fine. If she went somewhere, she’s already back and pissed you went through her shit.”

“Where could she go? She doesn’t have a car.”

“You’re the one who gives her rides!”

“I’m not the only one.” She said it pointedly, something in it I was supposed to extract.

She looked heavenward, as if the answer was soon to arrive. “You don’t understand. She thinks she’s like you. But we’re not anything like you.”

“What’s so wrong with me, anyway?”

“For one thing, you’re dumb about things you never had to know about.”

I realized we were standing at a cross angle from one another, that I had one hand on my hip, that she had both on hers. I wanted to drop my hand, to tell her where I’d found Penny’s phone, and how, the rolls of cash in the freezer, what they might mean. If Penny was here, she would have trusted Flaca enough to tell her about the desert and the sand‑colored man, everything. If we were going to traffic in secrets, Flaca’s could rival us all. Flaca was surveying the pastries on the counters, a curious expression growing on her face, as if they were bizarre, diminutive creatures struggling toward life.

“How long has it been?” Flaca asked.

“Since she’s been gone? I don’t know. She was supposed to be on shift the night before last. What time is it now?”

“Almost eight. So what is that? Two days? Three?”

I didn’t answer. She looked up, finally seeing me. The wheels in her mind, I could tell, were beginning to turn.

“You have an idea. Someplace she could be.”

A Prayer for Travelers by Ruchika Tomar by Poets & Writers