David Campos is a CantoMundo fellow, the author of Furious Dusk (University of Notre Dame Press, 2015), and winner of the 2014 Andrés Montoya Poetry Prize. His poems have appeared in the American Poetry Review, Luna Luna, Prairie Schooner, Queen Mob’s Teahouse, and many others. Campos received an MFA in Creative Writing and Writing for the Performing Arts from the University of California in Riverside in 2013 and his BA from California State University in Fresno in 2010. Currently, he lives in Fresno and teaches English at Fresno City College and College of the Sequoias. As a part of Poets & Writers' Rural Libraries Tour project with California Center for the Book, Campos taught workshops at the Kings County Library, Tracy Branch Library, and Voices College-Bound Language Academies in California's Central Valley. 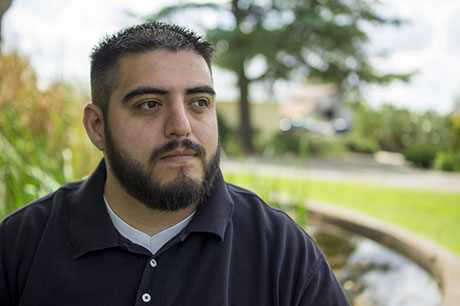 I drove down Highway 99 and took the 43, a two-lane highway, watching developments turn into vineyards, orchards, and the expansive agricultural land California’s Central Valley is known for. A tourist might be entranced with the plant life, but I couldn’t help but think of the houses, the sheds, the men, women, and children covered in the ninety-degree heat. The town of fifty-three thousand was quiet when I drove in on a Saturday morning where the Kings County Library in Hanford was still closed. They opened early for the workshop I was to give; I entered the space and prepped, greeting each of the twelve attendees trickling in.

And I knew not a lot of writers trickle into a small town’s library to give workshops and readings. In a town that lacks access to writers, poets, and artists in their area that can mentor, shape, or inspire the future in their medium, my presence was appreciated, and I accepted the responsibility of giving everything I could in the short amount of time we had together.

The Hanford Branch library group that had signed up for the workshop brought it. We worked on creating one single poem based on a tangible object that they held dear. A high schooler, accompanied by her mom and another family member, blew me away with her final draft. So much so that I told her if I was an editor, I’d publish it. I suggested she submit to places. Each one of the participants worked through their drafts diligently and with purpose. I felt honored to have worked with them.

Then up the 99 I went to visit the Tracy Branch Library to give another workshop. While we drafted a poem, we mostly talked about where to write from, the sources we think could be used and those that they hadn’t thought about.

Lastly, the wonderful group of middle schoolers at Voices Academies engaged in bilingual poetry. Their workshop was focused on names—names given, names earned, names of things they’re associated with. They wrote lists, and then on a large piece of butcher paper, they combined their work in both Spanish and English.

I walked away from each of these sacred learning places thinking about the responsibility we have as artists and writers—at least those with the means to travel—to visit those smaller “markets.” It’s too easy to become complacent in our larger cities, and larger markets, to only read at universities or bookstores. I know I’m guilty of this, but I know the poetic spirit doesn't just exist near the meccas of literature. It lives in Hanford. It lives in Tracy. It lives in the young and bright minds at Voices Academies. The literary landscape of the future needs us. Go there. Find the voices eager and ready to change the world.