Aidan Ryan is the publisher at Foundlings Press, which he cofounded with Max Crinnin, Darren Canham, and S. James Coffed. He is the author of Organizing Isolation: Half-Lives of Love at Long Distance (Linoleum Press, 2017), a collection of visual cut-up poetry. Ryan is a regular music critic for Scotland’s the Skinny and has written on travel and the arts for CNN, the White Review, Rain Taxi, and Traffic East, among others. 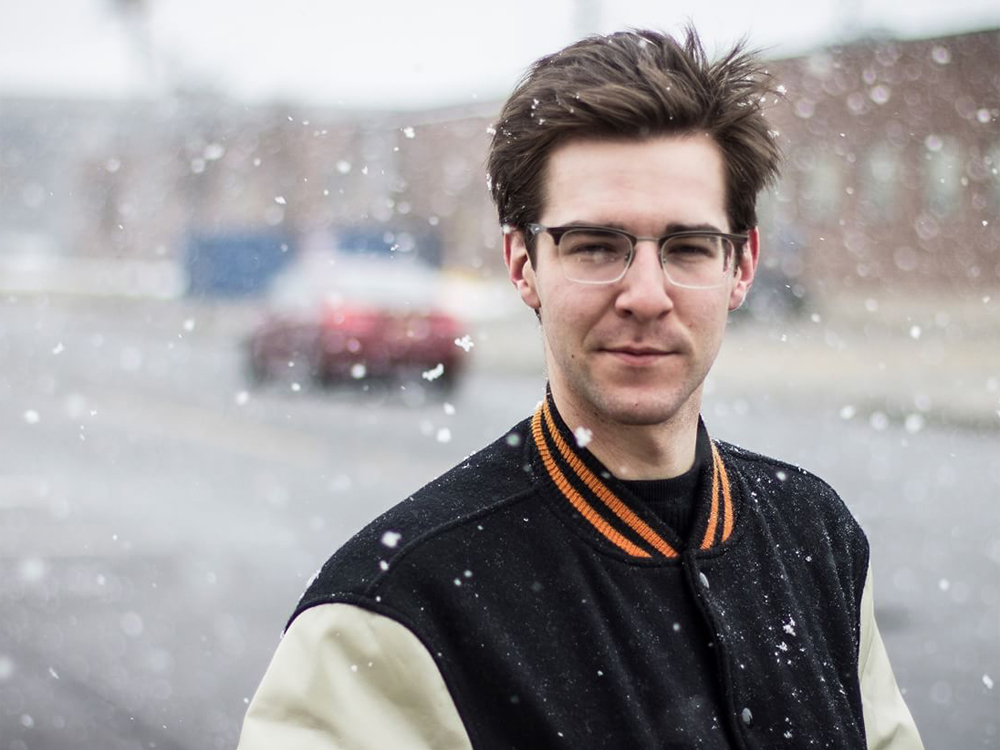 Every day, from the early 1900s to the last quarter of the twentieth century, the hundred-foot-tall concrete grain silos along Buffalo, New York’s namesake river and Lake Erie thrummed and hushed with rushing grain. At the city’s peak, thirty-eight of these towering elevators held forty-seven million bushels, and helped to feed the world. Now, on three nights a year, every summer since 2012, those same grain silos hum and echo with poetry.

The Silo City Reading Series is the “heartchild” of poet Noah Falck, education director at the Just Buffalo Literary Center. The series brings together a visiting poet, a local reader, a visual artist, and a musical act to perform for over one hundred people at the center of one of Buffalo’s remaining grain silos.

Silo alumni poets, including Ocean Vuong, Morgan Parker, Hanif Abdurraqib, and Natalie Shapero, have all spoken of the venue’s power to break both performers and audience members free from the traditional boundaries and expectations associated with poetry readings. Every experience is amplified and made more intimate by the concrete cylinder’s natural seven-second echo. 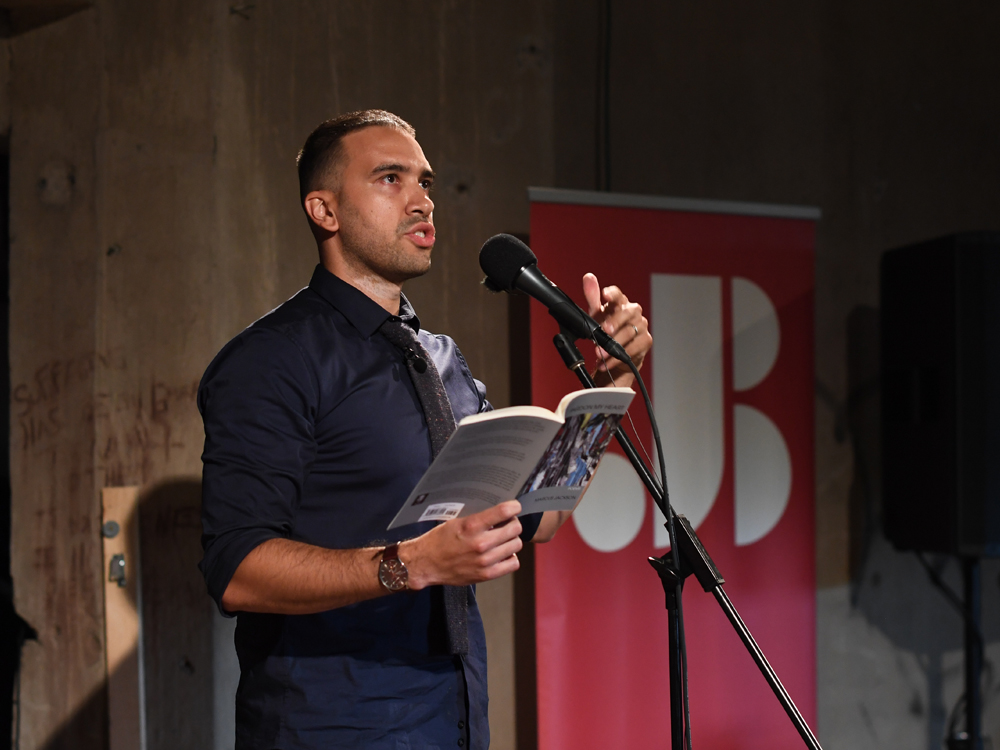 On August 18, the city’s grain silos held a “micro-arts festival” to honor the work of Frank Stanford and herald the publication of a book that takes its title from one of his posthumous manuscripts, Constant Stranger. With the support of Poets & Writers, the festival brought the poets Kazim Ali, Marcus Jackson, and Matt Henriksen to Buffalo for one extraordinary night of performances, which included readings by Stanford’s close friend Bill Willett and a theatrical performance by Torn Space Theater.

Constant Stranger: After Frank Stanford began in the late spring of 2017 as an attempt at a themed issue for our poetry magazine, Foundlings. Stanford—both a poet and a publisher, as cofounder of Lost Roads—had a major influence on our beginnings as a magazine and our growth into a press. Though Stanford’s influence stretches from Forrest Gander to Terrance Hayes and beyond, he remains unknown to many, obscure even to some who study him, persistently mischaracterized, and outside the “canon.”

The book sets out to present Stanford in a contemporary context, and make a case for his enduring relevance by publishing not more of his work, but the work of present-day writers who study, admire, or wrestle with him. We hardly grasped just how vital Stanford’s work really was, nor to how many contemporary readers, scholars, and writers, and our themed issue ballooned into a three-hundred-page book with thirty-plus contributors. 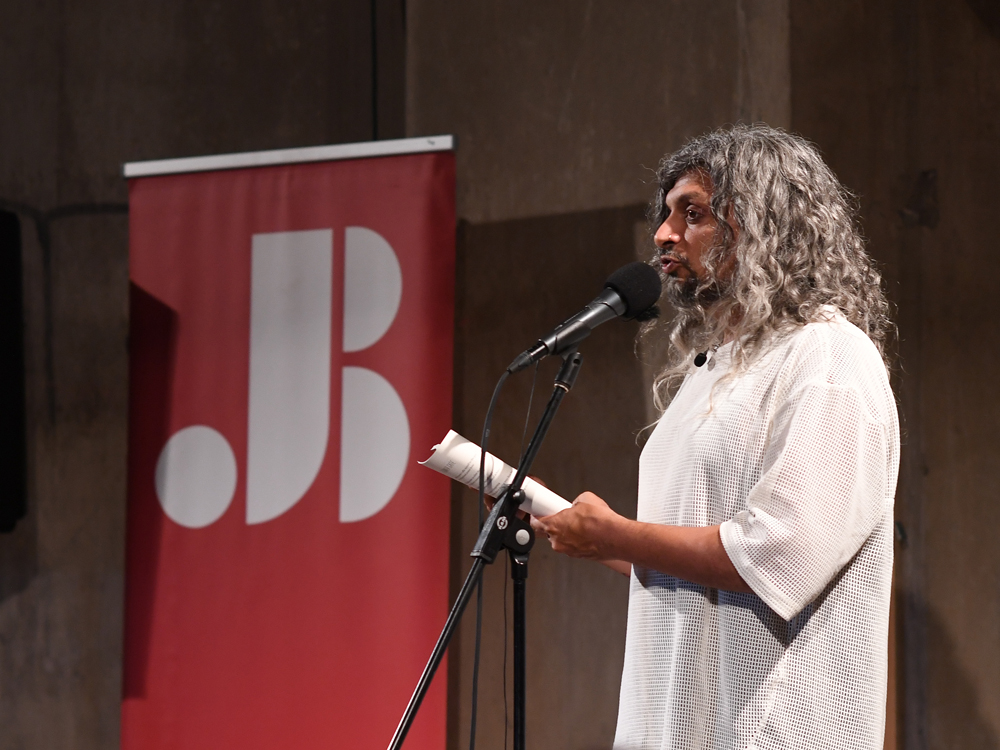 Marcus Jackson opened the evening, using the intimate circle of the Marine A silo to read poems from his collection Pardon My Heart (Northwestern University Press, 2018). Following a set by the electronic music group UVB76 and then a short break, Kazim Ali took the stage to read a mix of poetry from his latest collection, Inquisition (Wesleyan University Press, 2018), and unpublished work—including, and very much in the spirit of Stanford, poems conceived that day.

Matt Henriksen and Bill Willett, who has been a constant steward of Stanford’s legacy, read a selection of Stanford’s poems, bouncing back and forth to deliver well-known works like “Linger” and “The Light the Dead See,” knotty excerpts from The Battlefield Where the Moon Says I Love You (Lost Roads Publishers, 1977), and lesser-known “deep cuts.”

To close out the evening, Foundlings Press editor in chief Max Crinnin and I unveiled Constant Stranger: After Frank Stanford, and spoke briefly about the project’s genesis, its meaning for our press, and our hopes for its reception. The book will be officially released at the Frank Stanford Literary Festival on September 21–23 in Fayetteville, Arkansas.

Everyone who saw it swears the moon appeared twice that night: once orange and full, low above the last remaining factories along the lake, and later, after the Torn Space performance, half-veiled and pale, hung high in the total dark. Whether through the power of suggestion or something more profound, Bill Willett swore it was Frank at play.