Tiana Nobile is a Kundiman Fellow and lives in New Orleans. Her poetry has appeared in the Collagist, Phantom, Bone Bouquet, TENDE RLOIN, and others. Her chapbook, The Spirit in the Staircase, a collaboration with visual artist Brigid Conroy, is forthcoming in spring 2017. 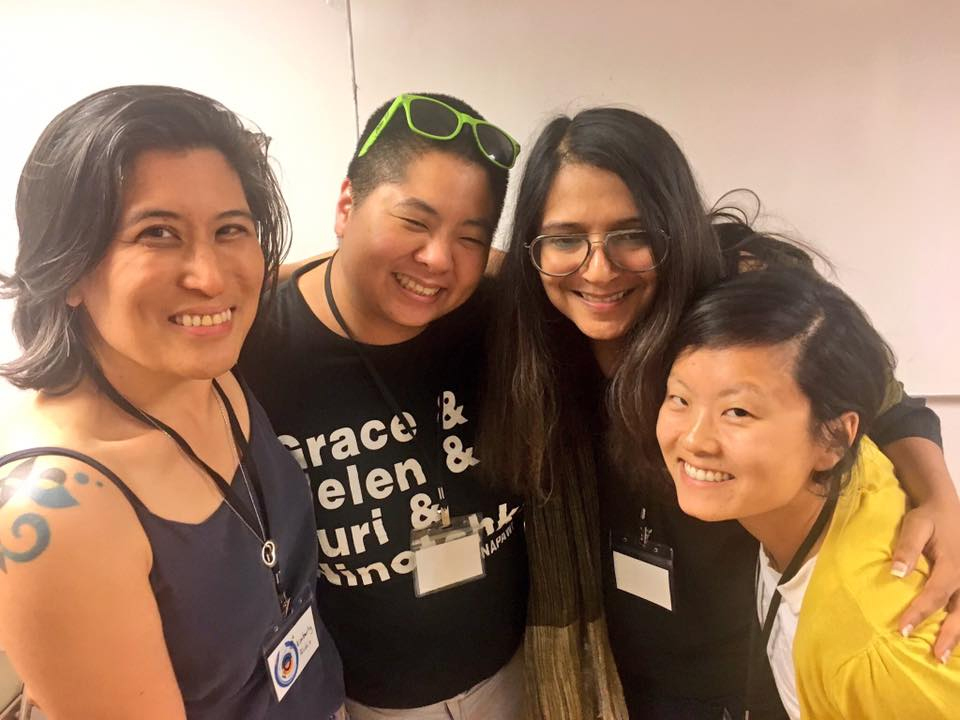 The history and reality of being Asian American in the South are often rendered invisible when it comes to mainstream discourse. Four Kundiman fellows worked to challenge this erasure by uplifting the voices of Asian American poets in the South through the panel, “Self-Articulation and Solidarity: Asian American Poets Encounter the South,” a hybrid poetry reading and discussion at the New Orleans Poetry Festival on April 21.

Within the vast terrain that constitutes the South, we all hail from distinct locations—Ching-In Chen from Houston, Kimberly Alidio from Austin, Vidhu Aggarwal from Orlando, and I’m from New Orleans—and our experiences and histories within these places vary greatly. This panel was not an attempt to seek or define a singular narrative; rather, we discussed the diversity of experience and our personal relationships with the South, whether that be as newcomers, natives, or transplants. While our various participations range, they include actively acknowledging and illuminating the deep, complex histories of Asian American existence in southern communities as teachers and standing in solidarity with the Black Lives Matter movement as activists through Asians 4 Black Lives. During the panel we shared poems and engaged in a critical dialogue in order to call attention to the fact that yes, we are here, we have been here, and we aren’t going anywhere.

Below, the panelists share their thoughts on the experience.

“Our panel was a map across Texas, Louisiana, Florida, and Maryland. It stitched many Asian American Souths: rural and urban, spectacular and invisible. It is intimate and curious. How we commute between communities in a politically diverse South. How we return again and again to crisis encounters in responses to street harassers and scammers profiting from gentrification schemes. How childhoods in the South birth postcolonial futures. How technologies can translate and transmit the migrant condition. Our panel pushed against various narrows and traps. We don’t claim space for permanent, historical settlements atop indigenous land. We refuse to compete with Black communities for civic attention and resources in the South. This is difficult and collaborative work. Thanks to Poets & Writers for making this glimpse of possibility possible.”
—Kimberly Alidio, author of After projects the resound (Black Radish, 2016)

“For Ching-In and I, the New Orleans Poetry Festival was the third iteration of the ‘Self-Articulation’ panel. For me it felt different speaking in New Orleans, where I grew up, learned to ride a bike, worked in street fairs, and where Tiana Nobile has lived for the last ten years. Kimberley Alido read/spoke brilliantly of the Texas landscape. Tiana read from her manuscript The Spirit in the Staircase, ‘l’esprit d’escalier,’ the French term for the perfect comeback, arriving woefully too late, after the fact. We’ve all had our share of jibes, insults on the street, and the impossibility of ready answers. Ching-In asked me about comebacks I might have up my sleeve, and I blanked. A comeback to what? My instinct was to invite folks in the room to hurl insults at me, so I could test my wits in real time! But I couldn’t even do that. I was too slow! The conversation moved on: to the freeze response. Or whether or not our works were a type of response. But would that always put our work/ourselves in a defensive/offensive posture? In argument? We could have talked more, and did over drinks and crawfish at Tiana’s. It was okay to be slow, to take our time, to meet up again and again and figure it out.”
—Vidhu Aggarwal, author of The Trouble With Humpadori (The (Great) Indian Poetry Collective, 2016)

“It’s rare to be seen and allowed space to reflect upon where you live, where you spend time, what you are burning to say and ask. While living in the South, I have felt between spaces, between binaries, between stories. One of the challenges about making sense of our experiences living in the South is that they are so varied and feel singular. Though our experiences living/working in Baltimore; Austin, Houston, and Huntsville in Texas; Orlando, Florida; and New Orleans were varied, to talk, eat, laugh, and poem with other Kundiman South poets at the New Orleans Poetry Festival was to recognize and make sense of each other, to put story to our questions, dialogues, and encounters, to practice generosity with each other and with those we live in community.”
—Ching-In Chen, author of recombinant (Kelsey Street Press, 2017)