An Industry of Writers and Our Greatest Freedom: A Snapshot From the New York Literary Scene

Winner of the 2017 Maureen Egen Writers Exchange Award for fiction from Poets & Writers, and one of the “5 More Over 50” debut authors in the November/December 2017 issue of Poets & Writers Magazine, Joan Dempsey is the author of the novel, This Is How It Begins (She Writes Press, October 2017). She received an MFA from Antioch University Los Angeles and was the recipient of a significant research grant from the Elizabeth George Foundation. Her writing has been published in the Adirondack Review, Alligator Juniper, Obsidian: Literature of the African Diaspora, and Plenitude Magazine, and aired on National Public Radio. 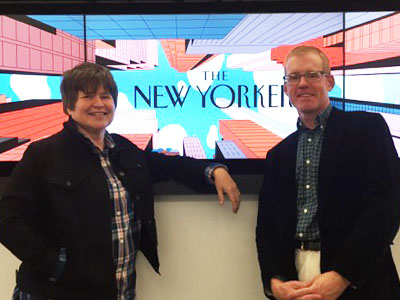 On a crisp, clear October morning, the three of us hustled down Vesey Street in Lower Manhattan, not wanting to be late for our meeting with Deborah Treisman, fiction editor at the New Yorker. We hurried past chain-link fences, shrouded to obscure what remains undone in the wake of 9/11. We waved away hawkers who propositioned us with memorial tours. We tried not to think about going up thirty-eight stories in the One World Trade Center building.

I was in Manhattan as the winner for fiction of the 2017 Maureen Egen Writers Exchange Award from Poets & Writers, which includes an all-expenses-paid whirlwind tour of the New York literary scene. Brian Evans-Jones, the winner for poetry and a fellow Maine resident, kept pace beside me. Both of us trotted along after Bonnie Rose Marcus, director of Readings & Workshops (East) and the Writers Exchange, who kept us on schedule as we rushed from one meeting to the next.

By the end of our six days, we’d gathered with nearly thirty people working in the literary world. The meeting with Treisman came on our second morning, but in hindsight it feels like the culminating event because it so well personifies the collective spirit of the week.

The guard in front of the revolving doors at One World Trade Center tried to shoo us down the block, assuming we were there for the 9/11 tour. We stated our purpose and were suddenly inside the cavernous lobby, the ceiling an impossibly high sixty-five-feet overhead. Other guards scrutinized our IDs, photographed us, carefully searched our bags, and ushered us through the metal detectors. We made nervous small talk, each of us keenly aware that we were heading up into the sky that used to house the twin towers.

The New Yorker offices are as lovely as you might imagine: walls lined with framed cartoons and magazine covers, books and papers everywhere, the distinctive Irvin typeface gracing the signs that indicate who inhabits each office. Walls of glass abound, maximizing the sweeping views out to Ellis Island and the Statue of Liberty and all the way uptown to the Empire State Building.

In Treisman’s office, she encouraged us to step right up to the window to get the full view; it was impossible not to think about those who had jumped. Far below, the twin reflecting pools occupy the footprints of the original towers. We talked about editing Alice Munro, the significance of fiction, and the gravity of fact-based journalism during the Trump era. “It’s no secret that we’re not fans of Trump,” Treisman said fiercely. I felt a similar fierceness—an urgency—in each of our meetings, an undercurrent of purpose that writers in gentler times are spared.

As we toured the New Yorker offices, a few people glanced up and smiled, but most were assiduously tending to their work. The quiet buzz of dedicated, brilliant, and creative industry I felt in that office was echoed in every other meeting that week. It filled me with a sense not of comfort, exactly, but of certitude. Literary artists continue to use words as writers have always used words: to speak truth to power, to inspire and bear witness, to exercise our greatest freedom. I am proud to be among them. 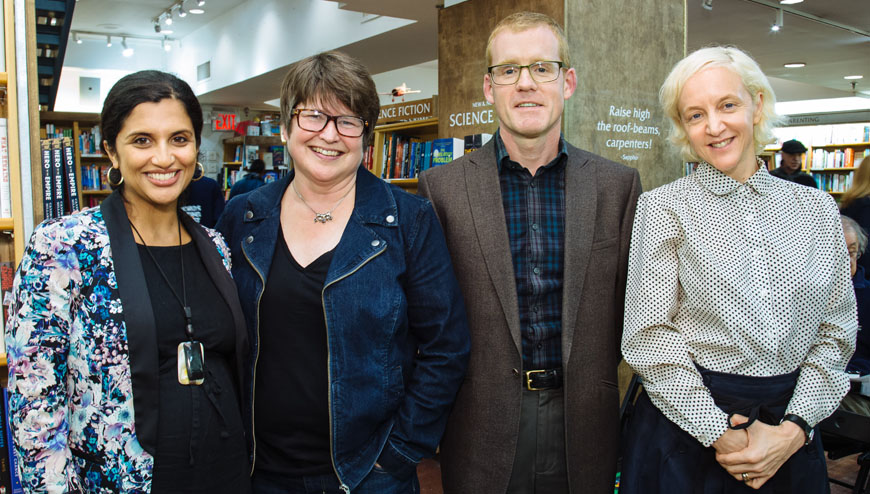