Alisa Besher is the programs manager at the Center for the Humanities at the Graduate Center of the City University of New York, and organized Publishing American Sign Language Poetry with Douglas Ridloff, an event featuring a workshop and performance of ASL poetry. Besher is studying in the American Sign Language English Interpretation Program at LaGuardia Community College with the goal of making scholarly and cultural events accessible to the Deaf community and supporting Deaf talent. In addition, she is an artist educator and museum guide, currently working at Dia Art Foundation. 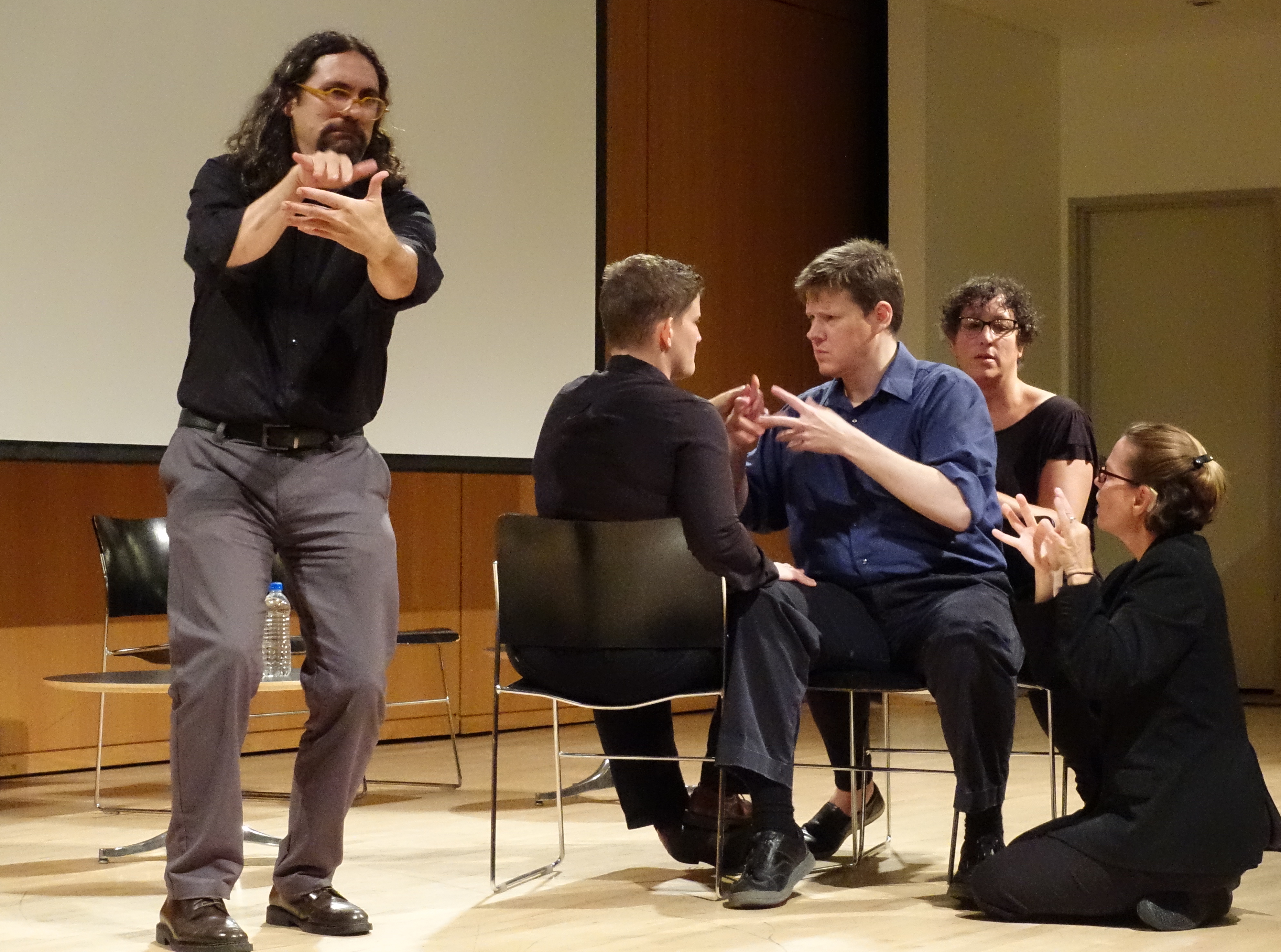 On September 13, scholars, authors, and poets came together for a workshop and performance in New York City that approached the question, “How can American Sign Language poetry be published?” In the afternoon workshop, this question was addressed through several angles, from interactive digital publications and the preservation of video “texts” to pop-up books, flip books, and comic strips.

In her introduction to the evening performance, Deaf scholar Rachel Mazique from the Rochester Institute of Technology spoke about Deaf literature as an emerging genre within the American canon, holding its rightful place alongside other minority literatures. However, Deaf literature cannot be found in its own section in most bookstores due to the scarcity of publications and lack of awareness in mainstream literary circuits.

This event was hosted by the Center for the Humanities at the Graduate Center of the City University of New York, an institution with no affiliation to Deaf scholarship, but with a long-standing commitment to research and public programming in literature and poetics. Hosting this conversation at CUNY was a deliberate effort to bridge the gap between hearing and Deaf audiences. With a grant from the Readings & Workshops program at Poets & Writers, we were able to offer honorariums to the poets.

The evening included several performances of ASL poetry by Deaf poet Douglas Ridloff, who runs the monthly ASL SLAM at Nuyorican Poets Cafe, and Flying Words Project, a collaboration between Deaf poet Peter Cook and his hearing collaborator Kenny Lerner, who have been performing together internationally for the past thirty years. Deaf author and artist Adrean Clark led an exercise in translation, exploring the creative potentials of the written systems of ASL.

Poet, translator, and publisher John Lee Clark, who is DeafBlind, introduced the potentials of ProTactile literature. If ASL poetry is an emerging field, ProTactile literature is in a phase of incubation. Developed by and for the DeafBlind community over the past decade, ProTactile is haptic, using the whole body to establish space, syntax, tone, and all the elements of a complex linguistic system. Clark performed one of his poems, originally written in English, in ProTactile on the body of his interpreter. This was observed and signed in ASL from one Certified Deaf Interpreter to another, and simultaneously voiced into English by a hearing interpreter. All at once, three languages collided, converged, and delivered a poem which began with the line: “We break our story into eight parts because there are eight of us to tell it tonight.”

The juncture between ASL and English was a theme throughout the evening. “Language, language, language…I can play with language!” Kenny Lerner voiced from behind Peter Cook, with his arms thrust under Cook’s to create a four-armed man. Their two pairs of arms signed the ASL word for “language” across Cook’s chest, crisscrossing diagonally, horizontally, and vertically. Their spoken words and visual signs met and bounced off of each other. If one were to simply read the transcript of this poem, one would miss the truly playful nature of their performance, and the “explosion of language” they created.

Douglas Ridloff performed his dynamic ASL poem about bustling New York City alongside a voiced transcription written in collaboration with Bob Holman, founder of the Bowery Poetry Club. The pair invited interpreter Lynnette Taylor to join them on stage to sign Holman’s spoken words. The audience witnessed the triangulated ping-pong of interpretation as the ASL poem was supplemented by spoken words and simultaneously interpreted back into ASL.

The complex questions proposed by the participants throughout the evening and during the discussion, moderated by Deaf author Sara Nović, do not come with easy answers. What is lost, what is gained, and what new meanings emerge in the tension and translation between ASL and English? How can ASL users assert their own literary genre, their own poetic forms, while also reaching audiences beyond the Deaf community? How can the Deaf community decolonize English’s hold on literary discourse, and how can it flip the script, to mine English for its own benefit? These questions may not have easy answers, but they are worthwhile to examine, to hold in our hands, and to knead and morph into new ideas and discussions as we continue to take steps to honor, respect, and celebrate the talent of Deaf poets.

To read more about the event, visit the Center for the Humanities website.