An Evening at the Bryant Park Reading Room

Since 2003, the Reading Room at Bryant Park has hosted established and emerging poets at an “open air” reading series held in the heart of Manhattan. This summer, the Readings & Workshops program was offered the opportunity to co-curate an evening of this series. Against a backdrop of jugglers, double-decker buses, and the New York Public Library’s Main Branch, Oliver Baez Bendorf, Elana Bell, Cheryl Boyce-Taylor, and Duy Doan shared their work.

Opening the evening, Baez Bendorf read poems from his book, The Spectral Wilderness (Kent State University Press, 2015), many of which interrogate and obfuscate masculinity. In one, the speaker directed us to call him, “giddyup and Tarzan, riot boy/ and monk, flavor-trip and soldier and departure,” each image bucking against what Judith Butler, quoted in the poem’s epigraph, calls “the ambivalent process” of identification.

Next, Bell read one poem written from a hilltop overlooking the settlement of Neve Daniel on the West Bank, dedicated to a woman named “Amal, whose name means hope.” With a piercing eye, the speaker outlines the differences between herself, who has “never drunk rain/ collected from a well dug by [her] own hands,” and Amal, who “moves/ through her land like an animal” and “laughs with all her teeth,” resulting in a tender ode to domesticity and diversity.

Boyce-Taylor read from her latest collection, Arrival (Northwestern University Press, 2017), which tells the story of a recently immigrated Trinidadian girl, her parents, and her stillborn twin brother. In one of the most poignant moments of Boyce-Taylor’s reading, the speaker imagines a moment of kindness in the womb, before her twin’s death: “He handed me the soft bread of his lips. ‘Sell it if you ever need shelter.’ Then he was gone.”

Bringing the reading came to an end, Doan shared poems from his manuscript, We Play a Game, selected by Carl Phillips for the 2017 Yale Series of Younger Poets prize. In the poem “Love Trinkets,” Doan’s speaker presents his experiences with love in a poignant litany, detailing lovers who had spurned him; who had deceived him; and one who “was kind, so kind, in kissing/ [him] at all.”

Poets & Writers is thankful for the opportunity to collaborate with the Reading Room, and a special thanks to each of our featured readers! 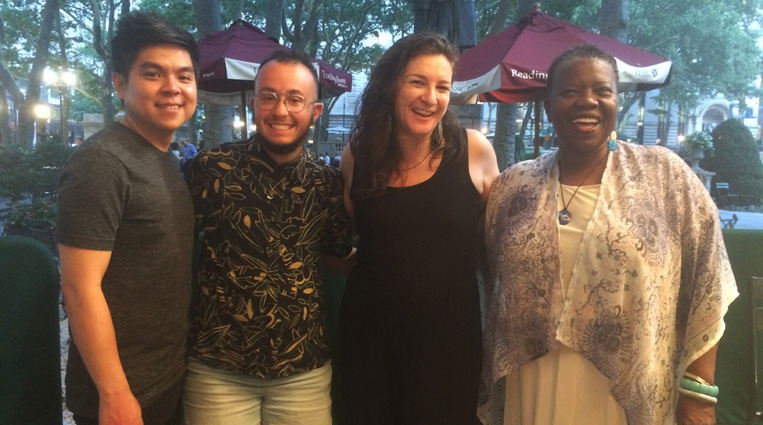