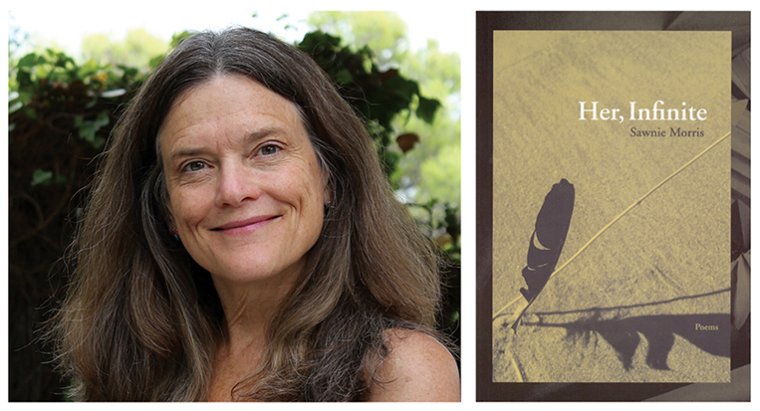 In the late 1980s, my husband and I founded and began working for what became a highly accomplished environmental-advocacy organization. Although the experiences expressed in Her, Infinite were written as that life was being lived, the seed poem did not arrive until 2007. The book gathered to its purpose poems written as much as fourteen years prior and five years after its own inception. Beginning in 2010, I spent five years submitting my manuscript to a wide range of presses and contests; Her, Infinite received recognition as a finalist fifteen times before being selected by Major Jackson for the New Issues Poetry Prize. The road to publication via contests was at times a grueling one, but I have no regrets.

A poem is not simply words on a page but a way of touching the stars and having the stars that have fallen into the sea touch us. Our lives are poems. Everything arrives and passes away as it should, and we don’t know the ending—which is the moment the entire poem, its meaning and music, is revealed—until the last line is written, even though it has perhaps existed in the eternal now all along. If we are called to write—and love is the true measure of any calling—then it is joyful duty, even in struggle.

In the fall of 2014 I woke from a dream knowing Her, Infinite was finally going to enter the world. I was floating in the sea and the manuscript had become part of that great benevolence. I felt a gentle yet profound euphoria that had little to do with publication and more to do with connection and a sense of utter acceptance. I woke crying and with the understanding that something huge was transpiring in my life.

On May 4, 2015, my beloved husband, an elegant and articulate abstract expressionist painter, received an advanced cancer diagnosis. Eight days later, in the late afternoon, post-surgery, as I was seated at the foot of his bed rubbing his feet, my cell phone rang. Her, Infinite had found a home. It would be another day before a faint happiness would appear to me in the form of a tiny asterisk moving whimsically around the hospital room while my husband recovered. It would be a year before true happiness, containing as it does a calm center, took hold in my body and I could feel both gratitude and awe for the mysterious synchronicity of those events—the cancer removed, the phone call from the press—arriving together, within the same hour. And even longer to appreciate the fact that the judge had taken an extra week to make his decision. The same week in which we were absorbing our terrifying news and plotting how to face, and with any luck, defeat it.

In a world where such things happen, how can we doubt the auspices of timing, doubt ourselves, or allow anyone else to doubt us due to age and its conspirator, time? Age is only as meaningful as what we have managed to learn and absorb, in our minds, in our bodies. We are here now. Now is the moment to put pen to paper, fingertip to key—to learn and practice our craft, to open ourselves to the music arriving from outside as well as rising from within us, in search of a welcoming.