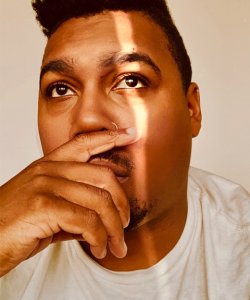 The Lawndale Art Center is located within the Houston Museum District and the Midtown Cultural Arts and Entertainment District, and hosts art exhibits, musical performances, and literary discussions and readings including the Gulf Coast reading series. The series presents readings from University of Houston Creative Writing Program graduate students and contributors to Gulf Coast: A Journal of Literature and Fine Arts. The monthly series supports the journal’s mission to spotlight the work of both esteemed and emerging writers with voices as diverse as the Gulf itself. 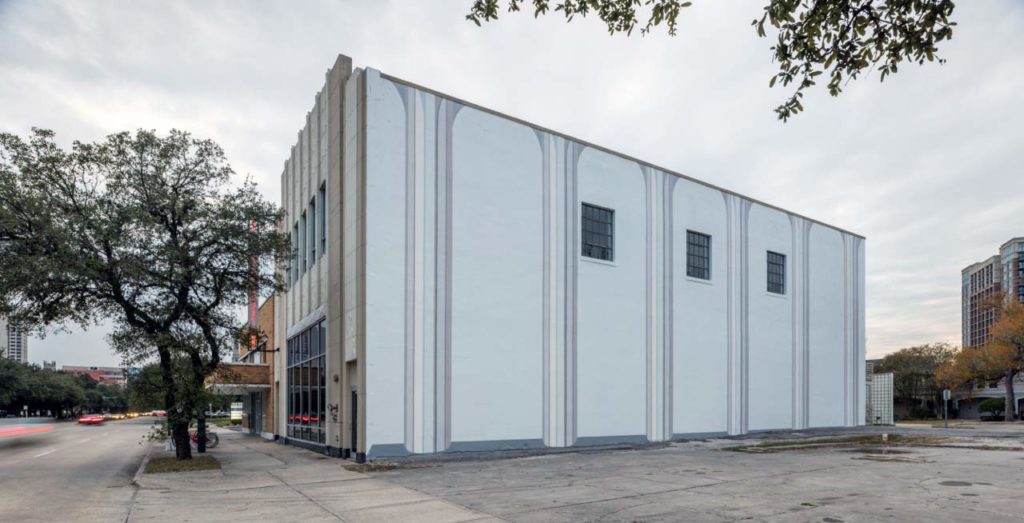 “My work often deals with dislocation, belonging, migration, of course, and I tend to create characters that are unnamed and not quite easy to place.” Valeria Luiselli, a 2019 MacArthur “Genius” fellowship recipient, talks about how she combines fiction and nonfiction to challenge conventional notions of authorship, and the ways in which the lives of others are documented.

The Whiting Foundation has announced the recipients of the 2019 Creative Nonfiction Grants, given annually to up to eight writers in the process of completing a book of creative nonfiction. This year’s grants recognize books that range from histories to works of memoir and original reporting, and for the first time celebrate a work of graphic nonfiction. The writers will each receive $40,000. 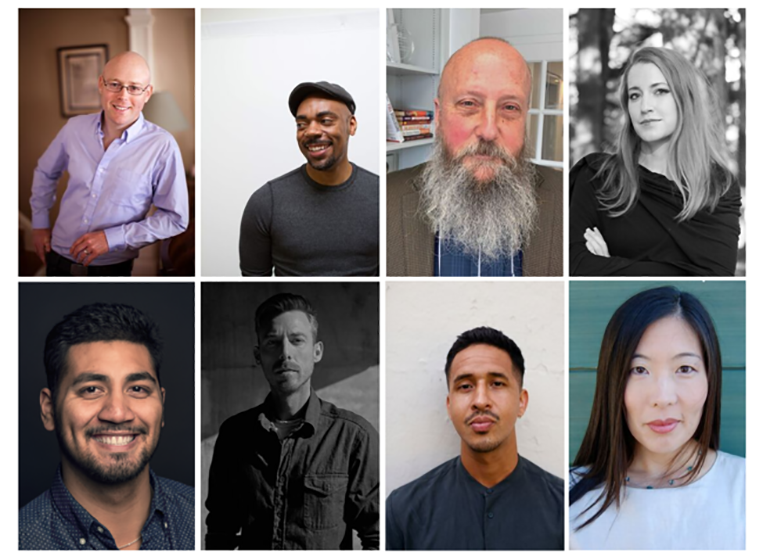 Wil S. Hylton for The Call of Empire, forthcoming from Riverhead

Jim Morris for The Cancer Factory, forthcoming from Beacon

Kristen Radtke for Seek You: Essays on American Loneliness, forthcoming from Pantheon

Albert Samaha for Concepcion: A Family’s Journey on the Immigrant Wave That Changed the Face of America, forthcoming from Riverhead

Damon Tabor for The Mountain in the Burning Sky, forthcoming from Random House

Walter Thompson-Hernández for The Compton Cowboys: A New Generation of Cowboys in America’s Urban Heartland, forthcoming from HarperCollins

The winners were selected from a list of fifteen finalists by an anonymous judging panel. Now in its fourth year, the Whiting Creative Nonfiction Grant “fosters original, ambitious projects that bring writing to the highest possible standard.” The applicants must have a publishing contract and be at least two years into their project. Previous recipients include Jess Row, Jennifer Block, and Sarah M. Broom. The next round of applications will open in spring 2020.

For more than forty years, the Whiting Foundation has supported literature and the humanities through its various programs, including its annual awards for emerging writers and the Whiting Literary Magazines Prizes, which honor literary journals. Visit the website for more information.

Submissions are open for Ruminate magazine’s VanderMey Nonfiction Prize. The annual prize awards $1,500 and publication in Ruminate to a creative nonfiction work of 5,500 words or less. There is no theme or topic for the prize, and all creative nonfiction forms—including personal essays, memoirs, and literary journalism—are accepted.

Using only the online submission system, submit a work of creative nonfiction of no more than 5,500 words and a $20 entry fee by October 30. The entry fee includes one copy of a digital issue of Ruminate. Visit the website for complete guidelines.

Founded in 2006, Ruminate is a nonprofit literary arts magazine with the mission to create “a space to share good stories, poetry, and art, including the stories and work of those who are nudged forward, backwards, and sideways on the spiritual journey.” The 2018 winner of the VanderMey Nonfiction Prize was Jonathan Winston Jones, whose essay “Bison Clouds” was selected by judge Camille Dungy and published in Hauntings: Ruminate 47.

In a recent interview for BOMB Magazine, poets Prageeta Sharma and James Thomas Stevens visit the New Mexico Museum of Art in Santa Fe and discuss topics ranging from Native American artists to identity, community, and appropriation. Throughout the interview the paintings and artworks viewed at the museum are brought into their conversation, propelling them to go in new directions or to speak more deeply on a subject. This week take a walk somewhere scenic—perhaps in a park, natural environment, or art museum—and write a short lyric essay that ties together issues already on your mind with ones that come up as you explore and carefully observe your surroundings.

The 32nd Annual Lambda Literary Awards (the “Lammys”) are currently open for submissions. The Lammys honor books in more than twenty genres ranging from literary fiction and poetry to speculative fiction, comics, and memoir, and are judged “principally on literary merit and content relevant to lesbian, gay, bisexual, transgender, and queer lives.” 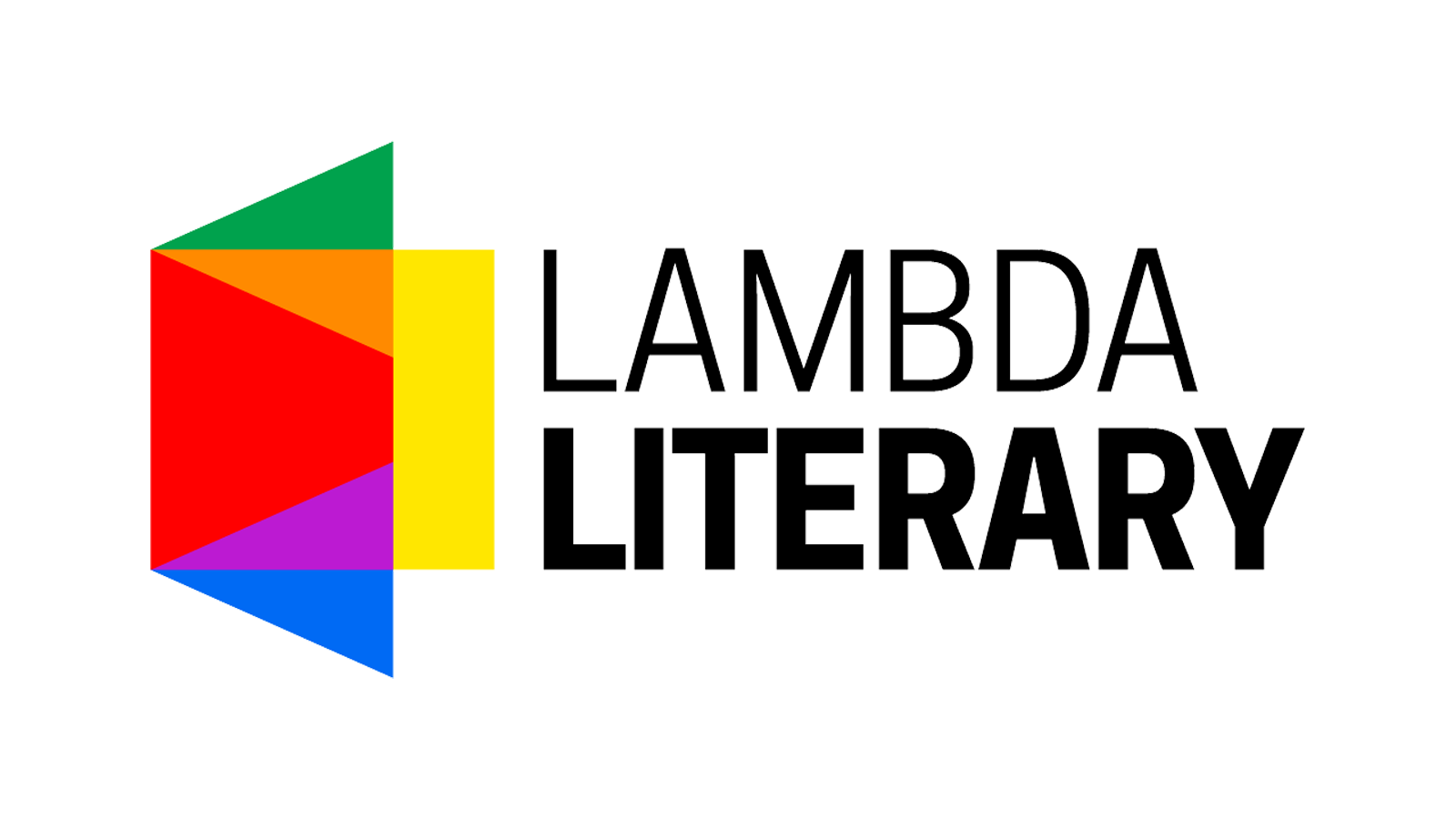 Submit three hard copies of a book and, if available, a .PDF version of the text, by November 15. Books put forward for consideration in this Lammys cycle must be published between January 1 and December 31, 2019, and may be nominated in no more than one category. Submissions may be made by authors as well as publishers or publicists. All authors, regardless of their sexual orientation or gender identity, are welcome to have their work considered, except in the case of the awards that mark specific stages of an individual LGBTQ writer’s career. The fee is $55 per book; for publishers entering eleven or more books, the fee is $45 per book. Visit the website for complete guidelines.

Finalists will be announced in March 2020. Winners will be revealed at the Lambda Literary Awards gala ceremony on June 8, 2020 at the NYU Skirball Center for the Performing Arts in New York City. Tickets for the gala will go on sale in spring 2020.

¿Que dice la buena vida, mi gente? On September 4, I joined the Houston Writers Coalition—a newly formed group of activist writers, professors, and creators—for an event supporting the Writers for Migrant Justice campaign. Organized by poets Christopher Soto, Jan-Henry Gray, Anni Liu, and Javier Zamora, the campaign brought writers together in more than forty cities across the United States to protest the government’s immigration policies and raise funds for the Immigrant Families Together Project, an organization that provides legal aid to undocumented families.

Here in Houston we participated by hosting a marathon reading—simply put, a reading with no introductions, prefaces, book signings, or discussions, just our words. Over forty writers gathered at the Holocaust Museum Houston, each of us reading an original piece or a piece from a notable writer on the topic of immigration. We raised a good deal of money for the campaign and auctioned off two mini-libraries, which each included a set of books signed and donated by local authors.

There are a few moments when a writer can say that they can make a direct impact outside of the written word, and that day, as we held simultaneous readings in multiple cities, writers stepped up to the plate and stood up for a just cause. 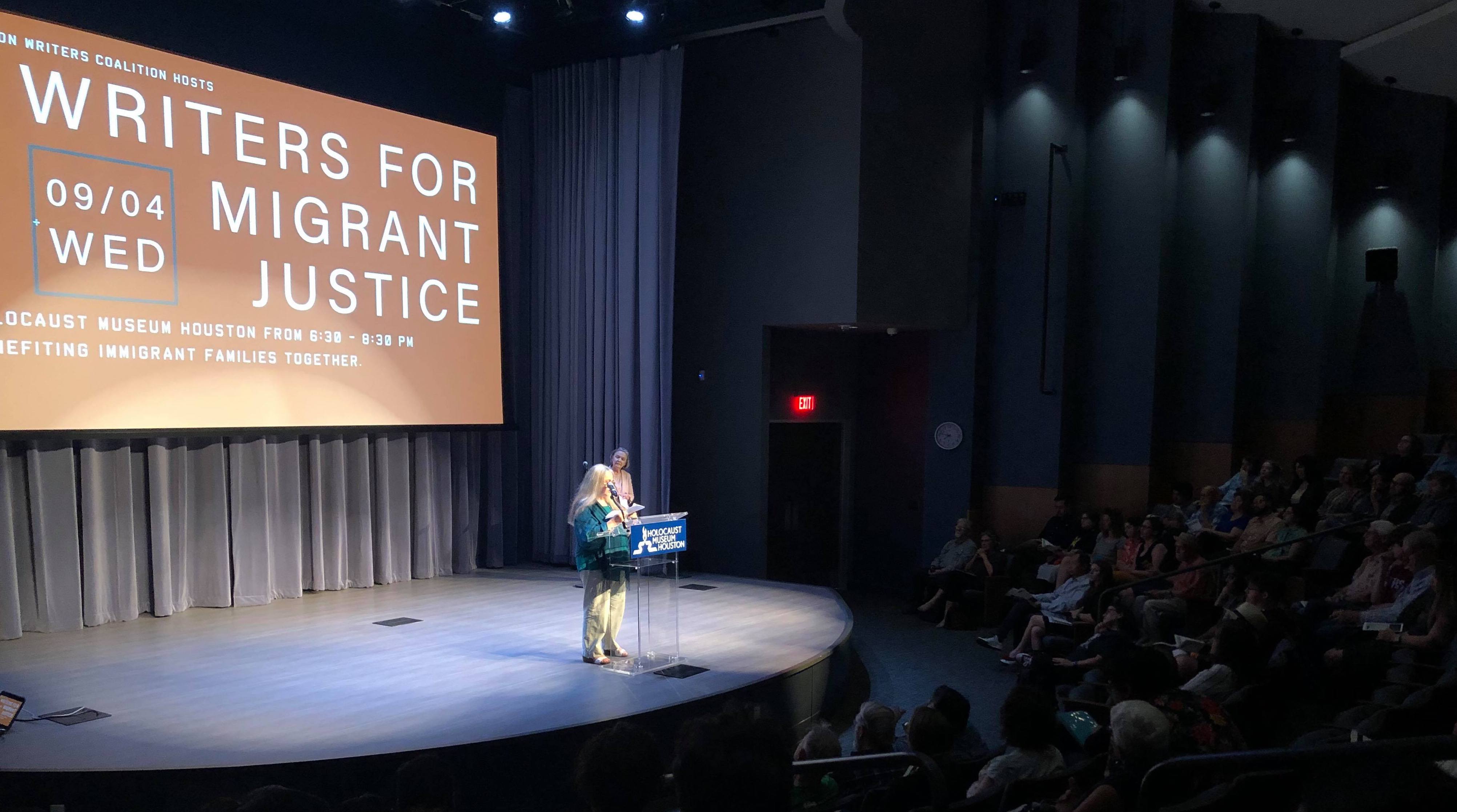 Farnoosh Moshiri reads at the Writers for Migrant Justice event in Houston. (Credit: Lupe Mendez)
Lupe Mendez is the literary outreach coordinator for Poets & Writers in Houston. Contact him at Houston@pw.org or on Twitter, @houstonpworg.
United States of Writing

As a writer, I know how quickly our own writing seems to age. It often feels difficult to generate new work. Communing with fellow creatives is sometimes the best way to put pen to paper. With that in mind, I want to highlight a couple spaces for writers that I have found in the area.

Riverwise is a community-based magazine focused on highlighting local activism and personal Detroit stories. Alexis Draper has been organizing the Riverwise Writing Workshop series, which are held all over the city allowing for more accessibility to folks seeking out classes. The workshops range from general creative writing techniques to focusing on discussions about social issues in our community. A recent workshop called “Uncomfortable Spaces” was offered for free at the Artists Inn and was led by local poets Kahn Santori Davidson and Natasha T. Miller.

The Detroit Writing Room is an up-and-coming venue that opened in June offering coworking and event space in downtown Detroit. They have writing coaches that anyone can schedule an appointment with for feedback and editing on business materials or literary work. Many of the writing coaches are local creatives and professionals, including Anna Clark and Ashley Calhoun, both of whom I highly recommend!

There are so many organizations and spaces that I could mention, but here are just a few more: Bottom Line Coffee House is home to a number of workshops led by local writers and visual artists, and they have great coffee and pastries. The Room Project is a work space for women and nonbinary writers and artists, and this October and November they will be offering creative nonfiction workshops. InsideOut’s after-school program, Citywide Poets begins this October for any teens looking to develop their writing.

I hope these are resources that you can use and share with fellow writers!

Justin Rogers is the literary outreach coordinator for Poets & Writers in Detroit. Contact him at Detroit@pw.org or on Twitter, @Detroitpworg.
Nowhere Magazine
Entry Fee:
$25
Deadline:
January 14, 2020

A prize of $1,000 and publication in Nowhere Magazine is given twice yearly for a poem, a short story, or an essay that “possesses a powerful sense of place.” Porter Fox will judge. Unpublished and published pieces that have not already been chosen as a contest winner are eligible. Using only the online submission system, submit a poem of up to 800 words or a story or essay of 800 to 5,000 words by January 1, 2020. The entry fee is $20 until November 30 and $30 thereafter. All entries are considered for publication. Visit the website for complete guidelines.