Throughout the past year, white tents with the letters UNHCR stenciled in blue on the top have been showing up in the countryside around my home in Madaba-Manja, Jordan. They’ve appeared in the campgrounds of the Bedouin herders, who usually live in more traditional gray and khaki tents. The stencils identify them as belonging to the United Nations High Commissioner for Refugees—the tents are part of the international influx of supplies for the Syrian war refugees—and their appearance in my neighborhood means they’re being sold on the black market. 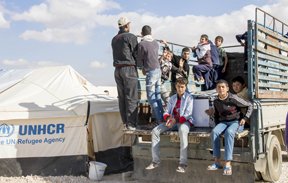 I call a friend of mine in Amman, Jordan, who makes a quick phone call and then rings me back. “The tents are selling for fifty dinar [about seventy-five dollars] in Mafraq and seventy-five dinar in Amman,” he says. There are two theories about where they’re coming from. Some people think there’s corruption in the supply chain and that the tents are hitting the black market before they’ve been distributed to the refugees, but a second, more plausible theory is that the Syrians are selling the tents because they need the money. “Two families will move into one tent,” my friend says, “and then they’ll sell the second one.”

In July, when the government stopped releasing information about the number of Syrians flooding into the country, there were 144,000 Syrians in the Zaatari refugee camp, which sits on a barren plain five miles south of the Syrian border. The Jordanian authorities built a six-foot-high dirt berm running parallel to Highway 10. Beyond the mound, I can see seemingly endless rows of white tents. In January and February of 2013, seasonal rains caused flooding, and the Jordan Times carried front-page stories about demonstrations organized by refugees who were upset about the poor housing and food shortages.

I loiter by the Jordanian Army’s armored personnel carrier at the entrance and watch the people flow in and out. Families walk past carrying suitcases tied with string; unsupervised kids run around; and what appears to be a crazy man lurches about in the road, misdirecting traffic.

On the drive back to Amman, my mobile phone rings; a friend has arranged an interview with the Syrian screenwriter and director Muhammad Bayazid, an exile whose successful business has enabled him to avoid the camp and rent an apartment in Amman. He has agreed to meet me and talk about the impact of the war on his life and work.

Muhammad Bayazid fled from Syria into Jordan on November 19, 2011, after twenty-four hours of imprisonment and torture at the hands of shabiha—thugs working for the regime of President Bashar al-Assad. It was a startling turn of events for a young man who five years earlier was shaking hands with Asma al-Assad, the first lady of Syria, and agreeing to use his talents as a screenwriter and filmmaker to help publicize her many charities.

We meet in early June at Gloria Jean’s Coffees, a Starbucks-style café on Madina Street in Amman. It’s a neutral public space. The Syrian border is less than an hour away, and Bayazid remains cautious. He’s thirty years old, with finger-combed hair and a four-day growth of beard, dressed in a red shirt, jeans, and a watch with a blue denim band. He tells his story using the English he taught himself as a kid in Syria and improved later during stints in Los Angeles and London.

Growing up, Bayazid fueled his passion for storytelling by reading classics such as A Tale of Two Cities by Charles Dickens, which were supplemented by American comic books checked out from Syrian libraries. “I adored them,” he says. “Batman, Superman, SpiderMan. When I was a kid, I drew comics of my own.”

Bayazid’s father was a successful Sunni Muslim businessman in a country riven by ethnic strife. Having attended Al-Azhar, a famous Muslim theological university in Egypt, Bayazid’s father wore a beard but was not radical. He was just a “normal Muslim,” Bayazid says, a businessman who moved between Italy and Syria looking for a stable environment for his clothing business.

When Bayazid was in high school in Damascus, he volunteered for a nonprofit organization that cared for orphans. The company wanted to edit documentaries for one of its projects, and Bayazid volunteered to help. His experience led to an interest in filmmaking and eventually a trip to Los Angeles for a three-month course in film editing.

Afterward, back in Syria, he continued his education and worked part-time as a film editor. After earning a bachelor’s degree in business from Damascus University, he opened his own production company specializing in public service announcements and commercials for nonprofit organizations. To improve his writing, he finagled an invitation to study documentary filmmaking with the BBC in London and ended up spending eight months under the tutelage of Julian Doyle, the editor of Monty Python’s Life of Brian (1979) and the assistant director of Terry Gilliam’s Brazil (1985).

By 2006, Bayazid says, his business “couldn’t have been any better.” He employed six people and was expanding into 3-D production. He had clients in the United Kingdom, the United Arab Emirates, Kuwait, Egypt, and Syria and had just met with the first lady of Syria, who was impressed by one of his short films.

All was going well until the Arab Spring uprisings began in Tunisia in December 2010; the demonstrations were well publicized, and they expanded into Egypt and Syria in January 2011. In Egypt the military chose to remain neutral, but in Syria the armed forces sided with the government against the protesters.

Bayazid witnessed one of these clashes in Daraa, a Syrian town adjacent to the Jordanian border and one of the hot spots during the earliest days of the Syrian revolution. “It was the trigger of my standing against the regime,” he says.

He was in his car, returning to Syria from working on a project in Jordan. At the border, the guards told him gangs had closed the main road; it wasn’t safe. They advised him to turn around and head back to Amman, but Bayazid decided to risk it. He drove north toward the town of Daraa and watched security forces—not gangs, as the border guards had claimed, but government forces—burning tires in the road.