She agrees to read a sample of her poetry. She writes in classical Arabic—typical among educated Arab poets—and she speaks in a deep, pleasant voice that commingles the objective intonations of a broadcast news anchor with the emotional inflections of a blues singer. Introducing the poem, she explains that Hamza al-Khateeb was a thirteen-year-old boy who was tortured and killed by the Syrian regime on April 29, 2011. When his mutilated body was returned to his parents and their protestations went viral, the government filmed a public service announcement in which a nurse with red-painted fingernails tried to argue that the boy’s wounds were not caused by torture. The poem, which is dedicated to the boy’s mother, describes the murder and the cover-up. 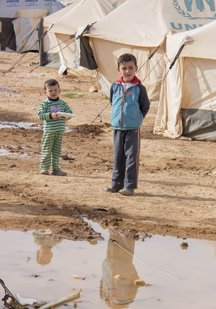 For now, Mohammad says, she will stay in Paris, where between her savings and her occasional work as a writer for various Arabic newspapers she is finding ways to make ends meet. But she yearns to return to Damascus. “We built all our lives in Syria, and we’re impatient to go back; we’re dreaming of going back.”

Muhammad Bayazid is sitting in Gloria Jean’s Coffees in Amman. “I’ll tell you about being tortured,” he says. I nod and ask him to continue.

“They took me to an old basement under a store. The place was filled with other people. I’m sure people were killed. One guy was hanging from the ceiling with his wrists tied behind his back; it pulls the arms out of the sockets. They stripped me naked except my underwear, cursing me the whole time, calling me a traitor, and beating me with an electric cable. I was lucky; they threatened to hang me from the ceiling, but they just beat me. They would hit me for five minutes and then rest.

“I remember the guy beating me looked exhausted. I was looking at his face. He was about twenty years old, and I was sad about him. They’ve changed him forever; he needs psychotherapy.

“They burned me with a cattle prod. I have a permanent burn mark here.” He points to his left shoulder and tugs down his shirt collar to show me. “It’s a nice memory. Do you want to see it?”

I shake my head. I want to look away.

“I lost the feeling of pain. After hours of being beaten, you feel nothing. An officer came with two security officials with AK-47s, and he asked me why I insulted the soldiers. I told him I didn’t want this drama in Damascus, that it would turn the population against the regime. He kicked and slapped me and told me I would be transferred to a security center. I thought I would be killed there.”

Instead, he got lucky. He isn’t sure why. Perhaps they believed his story about being friends with the Syrian first lady, or maybe they were worried because news of his detention was being broadcast on Al Jazeera; his friend in the car had called the news agency hoping publicity would help gain Bayazid’s release.

The security officials blindfolded him again and took him outside to a car where they told him they were releasing him. Bayazid, fearful that in his bloody and disheveled state another group of secret police might see him and arrest him again, paid the men the equivalent of a hundred dollars to take him to a friend’s house.

“Really?” I ask. “You bribed your torturers to take you someplace safe because you were scared that other secret police would see you, recognize that you’d been tortured, and rearrest you?”

Once he had made it to the home of a nearby friend, Bayazid called his driver and asked him to bring him a change of clothes; his were soaked with blood. He drove himself to the Jordanian border. Inside the crossing checkpoint, there was a television in the waiting room playing Al Jazeera. News of his detention was among the lead stories, and he worried that the border guards would see the news and keep him in the country. They didn’t notice and let him pass.

Later a friend in a government ministry told Bayazid that if he had waited twenty-four hours, he would have been arrested a second time. Since fleeing the country, Bayazid says, his name has been added to a list of people the regime has ordered to be killed on sight. His family quickly followed him to Jordan.

He was worried when his passport expired in March 2012, but he discovered that he could send bribes to officials inside the country, and he soon had an updated passport.

Still, he remains nervous. He arrived at an earlier interview and discovered a suspicious-looking man waiting for him. As he neared, the man “reached for something that looked like a gun,” Bayazid says, so he sped off in his car. He hopes that the regime has become preoccupied with other problems and no longer has time to worry about killing him.

In Jordan he continues to work. He has been commissioned to make fund-raising ads to be shown on American cable stations for the Syrian Support Group, which backs the revolution, and he also creates ads to be shown in the Arabian Gulf countries for a group raising money for the refugees in the Zaatari refugee camp.

“We don’t want the war with this dirty regime to change the purity of us,” he says. On his computer, he shows me a sixty-second public service ad he made for a group called Al Jasad Al Wahid or One Body. It’s a call for Syrian unity, a plea for the country not to fragment and factionalize.

In it, a young Arab boy is seen flipping through a coffee-table picture book in an all-white, futuristic-looking apartment. The book is filled with colorful photos of the revolution: There are shots of peaceful crowds waving Syrian flags, a photo of an elderly gentleman genuflecting with a Syrian-flag bandanna wrapped around his forehead, and several shots of beautiful Syrian monuments. A clock on a nearby table shows the time and date: 3:00 PM, March 15, 2025. The boy closes the book and walks to a massive picture window overlooking Damascus’s famed Umayyad Square, bright and beautiful. The scene fades to white and an Arabic sentence appears:

“Syria, we build it together.”

Stephen Morison Jr. is a contributing editor of Poets & Writers Magazine. He has reported on the literary communities of Afghanistan, China, Egypt, Jordan, Myanmar, Vietnam, and North Korea. He lives in Madaba-Manja, Jordan, and is working on a children’s book set in Beijing titled “Emily and the Grand and Terrifying Dragon” (www.emilyandthedragon.com).