Francesca de Châtel, a Dutch author and journalist who speaks French and Arabic, and who served as editor in chief of the Damascus English-language magazine Syria Today for four years and published a book that is part travelogue and part survey of water resources in Syria, kindly serves as an interpreter during our conversation. 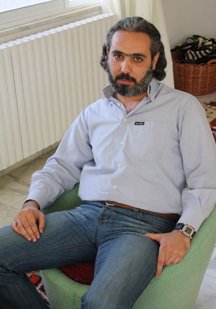 Etry is reluctant to talk about how he got into the country or exactly why he left Syria. He lights a Winston. “I don’t smoke much,” he says and then tells us about his life.

His parents fled the fighting in Hama in 1981 when he was three, moving the family to a leafy suburb of Damascus called Ghouta. Traditional Arab families dedicate time each week for visiting relatives—aunts, uncles, and cousins—to play cards and chat about the news of the day, but Etry says he never felt comfortable in these group settings; he needed time alone. His siblings—five sisters and three brothers—teased him about his solitary nature. “Even in my own family, I feel like a foreigner, a spiritual foreigner,” he says.

Adding to his sense of alienation was his family’s very real displacement. The cities of Hama and Damascus are only 130 miles apart, but in 1981 they were on opposite sides of a religious and cultural war. When Etry entered school in his Damascus suburb at age six, the students called him Al Hamwi, “the one from Hama,” and when he returned to Hama with his family for visits, his cousins called him Al Shami, “the one from Damascus.”

I ask him if the massacre in Hama had any impact on him personally, and his eyes mist over. “To people from Hama, the events of 1982 are like the birth of Jesus,” he says, meaning that the massacre has become a historical reference point. “People in Hama will say, ‘That wedding was five years before the events,’ or ‘she died five years after the events.’” There is nobody from Hama who wasn’t affected, he says. Everybody lost someone.

Contemplative and soft-spoken, Etry took refuge in books, words, and poetry. At age thirteen, he began memorizing aphorisms, proverbs, and poems. In particular, he fell in love with the poems of Nizar Qabbani, a famed 20th-century Syrian poet, diplomat, and publisher, and he also began writing his own poems.

After high school, he earned an undergraduate degree in French literature and a master’s degree in audiovisual translation from Damascus University. During this period, he supported himself through a variety of jobs: teaching French, transcribing and writing footnotes for handwritten Arabic scholarly commentaries for commercial publication, and working beside his brothers in their tailor shop.

In 2008, Etry had enough poems for a collection, which he assembled and succeeded in getting sanctioned by the Syrian Ministry of Culture, which censors and approves all books published inside the country. A Kurdish friend designed the cover, and Etry contracted with a publisher to print the book. (As is the case throughout the Middle East, most poets and creative writers either win a state-sponsored contest and have their work published by the ministry of culture or they submit their work to the censors and, after receiving their okay, self-publish for distribution to friends and for use at public readings). At the last minute, however, Etry grew dissatisfied with his collection and canceled the printing.

I ask him if he can recite one of his poems for us, and he nods. He explains that the events of the past two years have had an enormous impact on his writing. His neighborhood in Syria lost telephone service and electricity for more than five months. And his vocabulary has changed, he says. He notices that the words lost, sadness, shelling, bombing, and death now appear frequently in his work.

He recites softly and confidently. Most of his poem is in classical Arabic, which means the grammar creates natural rhymes between subjects and their modifiers. When he’s finished, he translates a line for us: “The heart echoes our worry for Damascus, and the sigh is as fearful as the eyes around us.”

Prior to the revolution, Etry says, there were a number of places in Damascus where poetry readings were held. Poets who were members of the government-sponsored writers union, which Etry describes as “like a retirement home for poets,” read in government-run cultural centers to very small audiences. But in the neighborhoods around Damascus University, “people were actually interested,” he says. There were cafés and private cultural centers where readings occasionally attracted audiences of more than a hundred people. Since arriving in Amman, Etry has given one reading—at Jadal, a small, private cultural center located in the city’s historic downtown.

Like Bayazid, Etry currently has enough resources to avoid the refugee camp, but his money is dwindling. I ask him what ethnicity he is and which side he supports in the fighting, and he replies, “I am first human, second Arab, and third Syrian. Hama is Christian and Sunni, but the villages around it are Alawi and Sunni. I have Alawi friends, Kurdish friends, Christian friends, and Druze friends, and it doesn’t make a difference.”

Ultimately, Etry hopes, the conflict will lead to greater freedom of expression. “The pens will be liberated,” he says.