“Since they closed the road, I cut into one of the Daraa villages, Sanamen. A funeral went past, and I pulled the car over and joined them. As a Muslim, [joining a funeral] is pretty common. Firing began, and I saw with my own eyes a man with a bullet between the eyes.” Bayazid could see a sniper on the roof of a building inside a government compound. “It was very clear who was killing who,” he says, certain that government forces were shooting unarmed members of the funeral procession. “After that day, I couldn’t shut up anymore.” 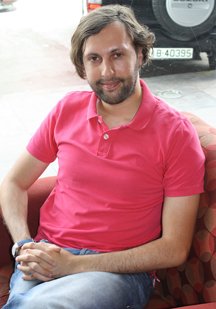 Soon thereafter he criticized the regime in an interview with a Lebanese radio reporter, and after the piece aired, a representative from the Republican Guard—al-Assad’s praetorian guard—called him and politely told him to focus on his filmmaking and leave politics alone. Bayazid responded with a Facebook post that accused the president of killing his own people. He received a second phone call that threatened to hurt him and his family if he continued criticizing the regime. Unnerved, Bayazid started planning to move his filmmaking business to Jordan.

He had nearly completed the move—his office was moved and his bags were packed and waiting in his apartment—when he got in a car with a friend to grab some dinner. As they drove toward a café, they saw three shabiha harassing three girls in a car. He asked his friend to stop the car. One of the men was going through the photos on a phone belonging to one of the girls, and the girl reached from the car window and snatched the phone back. “That was her mistake,” Bayazid says. The shabiha yanked her out through the window of the car, banging her head in the process. Bayazid got out to help.

He tells me his plan was to claim he was a friend of Asma al-Assad, the first lady. He would accuse the men of creating a disturbance that would swing public opinion against the regime, and the girls would escape while he argued with them. But he never got the chance to speak. As he stepped from his car, the shabiha attacked him.

“They hit me with three-foot sticks and an electric cattle prod to the chest,” Bayazid says. Using plastic zip-ties that cut into his wrists, they handcuffed him, then blindfolded him and dragged him into a nearby basement under an abandoned store. The basement was filled with other prisoners. Bayazid listened to the shabiha beating and torturing the others. Then they came for him.

“I’ll tell you about being tortured,” he says.

The roots of the Syrian revolution are twofold. On one hand, there is the desire of the Syrian middle and upper classes to have greater freedom of speech and a larger role in their own governance. Hafez al-Assad, an air force general, took over the country in a coup d’état in 1970; upon his death in 2000, he was succeeded by his son, Bashar. The father rose to prominence as a member of the Baath Party, a secular, nationalist, and socialist political party that pays lip service to Arab unity. During the cold war era, Hafez al-Assad aligned Syria with the Soviet Union, which provided military aid to Syria, and he used Syria’s army and the secret police to control the populace.

When I visited the country in 1990, I discovered a repressive, Orwellian state. Secret policemen, identifiable in matching leather jackets, rifled through my luggage at the borders, tailed me in the streets, and followed me into shops. One day I got a shave from a barber who glanced nervously back and forth from my bearded face to the mirror, where he could see a member of the secret police sitting behind us.

Most of the middle-class Syrians fighting against the regime want an end to Big Brother and the civil violations that accompany the endless surveillance: They want an end to censorship, an end to wasta (the Arabic word for nepotism, “connections,” and corruption).

But there is also a second, separate motive behind the revolution. A large number of lower-class Syrians view the revolution as a religious war. The al-Assads belong to a religious minority in Syria; they are Alawis, a sect that forms about 12 percent of the Syrian population and whose members adhere to a branch of Shia Islam. Most Syrians—three-quarters of the population—are Sunni Muslims. In some ways, the split between Shiites and Sunnis is similar to the Catholic and Protestant split that divides Northern Ireland and the Republic to its south. Of the states in Syria’s neighborhood, Iran and Iraq are majority Shia states, and there is a sizable Shia population in Lebanon, while Turkey, Jordan, Egypt, Saudi Arabia, and the Gulf States are majority Sunni states.

In 1982 in Syria, there was a Sunni revolt against Hafez al-Assad, who responded by ordering his brother, the head of the armed forces, to shell the city of Hama, flattening the old section and killing at least ten thousand of its Sunni inhabitants (some reports claim the number was forty thousand). When I visited the country eight years later, the old city of Hama was still in ruins; no effort had been made to clear the rubble. Burned-out cars sat amid the wreckage of flattened homes. Hafez al-Assad let the bombed-out neighborhood sit untouched as a warning to the survivors.

I witnessed these things as an outsider, as a tourist with a camera and a pen, but for the Syrian poet Amjad Etry, the happenings in Hama changed his life.

In mid-June, when Amjad Etry arrives at my cousin’s apartment in Abdoun, a posh neighborhood in Amman, Jordan, he is nervous about the way he looks and reluctant to talk. He has swept-back shoulder-length hair and a full beard flecked with gray. The long hair is new, he says; the chaos caused by the war has him too exhausted to visit a barber. He speaks Arabic and French but no English. After four months in the country, he is still struggling to find work in Anglophone Amman.