This week’s installment of Ten Questions features Meng Jin, whose debut novel, Little Gods, is out today from Custom House. Told from multiple perspectives and across multiple decades, Little Gods is sweeping yet intimate record of a mother and daughter of the Chinese diaspora. On the night of the Tiananmen Square Massacre in 1989, an ambitious physicist named Su Lan is about to give birth when her husband disappears from the hospital. As the bodies of protestors begin to fill the hallways, she faces a precipice of solitude, saved only by the small, quiet baby now in her arms. Driven by ambition and an urgency to escape the past, Su Lan decides to immigrate to America with her new daughter, Liya. “I am stuck in a reel of the same irrationalities and insecurities that plagued the first decade of my life,” she tells her neighbor. “I am leaving, again, to populate my world with unfamiliar, indifferent ghosts.” Less than two decades later, Liya is returning her mother’s ashes to China—a country she has never truly known—retracing the history her mother left behind. Coupled with Liya’s journey, the father she has never met tells his story; her mother’s old neighbor also narrates in sections. Between these various stories and souls, a shimmering portrait of Su Lan emerges. “A brilliant debut—intellectually bold but with a startling emotional core,” writes Gina Apostol. “Meng Jin’s Little Gods is a huge pleasure.” Meng Jin is a graduate of Harvard College and Hunter College. Her fiction has appeared in Ploughshares, Masters Review, Baltimore Review, and Bare Life Review. A Kundiman fellow, she has also received support from the Elizabeth George Foundation and the Martha Heasley Cox Center for Steinbeck Studies. Born in Shanghai, Jin lives in Brooklyn, New York. 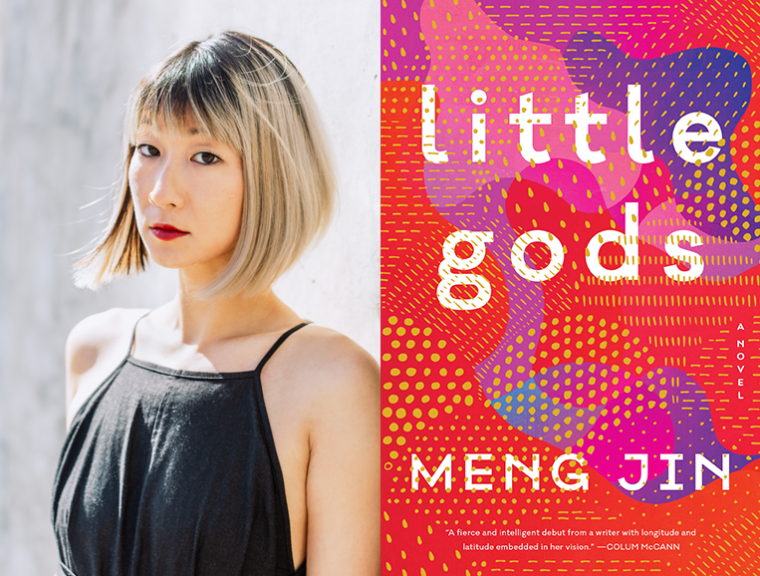 1. How long did it take you to write Little Gods?
Something like six or seven years? I’m not sure the rules of time apply in the same way when it comes to writing, and especially when it comes to writing first novels. This book went through so many drafts and changed so much in very fundamental ways over the course of the years and drafts, that I can’t really pinpoint when I “started” writing.

2. What was the most challenging thing about writing the book?
Much of the early years of writing this book was spent figuring out how to give myself permission. I had never written a novel before, I barely knew how to write a short story, I didn’t come from any kind of literary background. I felt very stupid—sometimes still do—attempting a project so ambitious in both form and scope for my first attempt. My earliest drafts were more like huge question marks seeking permission than like anything resembling a novel.

Once I felt like I had a foothold in the story, the challenge became time. I changed a bit as a person in the six or seven years—time changed me, and so did the writing itself. The world changed too. I remember the 2016 election as a very concrete obstacle in the writing of this book. I had just started working with my agent and felt I had a manuscript that was more than just question marks. But then Trump was elected, and I no longer understood why my novel mattered to anyone, including myself. I felt like my novel had been written for a world—and for a version of myself—that no longer existed. I spent much of 2016 and 2017 not just trying to find my way back into the book but also trying to convince myself that art still mattered.

3. Where, when, and how often do you write?
When I was deep in the novel, the answer was all the time. I would get up in the morning and make tea and sit down to write without changing out of my pajamas. Often my partner would come home from his day job around 7:00 PM and I still wouldn’t have brushed my teeth. There’s a beautiful Ada Limón poem, “Love Poem with Apologies for my Appearance” that too aptly describes my writing practice: “…the long bra-less days, hair / knotted and uncivilized, a shadowed brow /…the stained white cotton T-shirt, / the tears, pistachio shells, the mess of orange / peels on my desk…” I was gross.

4. What are you reading right now?
Celestial Bodies by Jokha Alharthi, translated from the Arabic by Marilyn Booth, a beautiful and kind of astounding book that feels like a more accomplished, lost sister of my own. I read through half of it very quickly and am going back to start again with more care and attention, because it’s the kind of book that rewards care and attention. I’m also picking at Absence of Mind, a book of essays reframing modern scientific thought through the luminous mind/spirit/soul of Marilynne Robinson.

5. Which author, in your opinion, deserves wider recognition?
In the Light of What We Know by Zia Haider Rahman is a book that totally floored me, and deeply informed my own novel. I think it won a prize in the U.K. but it hasn’t received as much attention in the United States. The Pathless Sky by Chaitali Sen is another beautiful book, published by Europa Editions, that I feel everyone should read. What I love about both these books is that their central characters are obsessed with some other field of expertise, mathematics in Light and geology in Pathless Sky, and the language and content of those fields reverberate meaningfully with the larger concerns of the novel.

Celestial Bodies won the Man Booker International Prize; hopefully that has widened its readership. But in general, I think that in the Anglophone world—and especially in America—we don’t publish or read enough translated literature, and don’t give enough recognition to translators and the art of translation. Every time I read a work in translation, I am blown away by the wild and various forms literature can take and made newly aware of how narrow the American literary tradition can be.

6. What is one thing you might change about the writing community or publishing industry?
Since we live in a world where money is necessary for survival—more money! For writers, for publishers, and especially independent presses, so everyone can be less beholden to the demands of the market. I know too many brilliant and promising writers whose books don’t exist yet because their circumstances are not set up for art-making. As one can imagine, many of these writers are women and/or nonwhite. I wish our society valued art deeply, and made it possible for people from all walks of life to make art.

7. What trait do you most value in your editor (or agent)?
Both my editor and agent respected and understood my vision for the work. Of course, we didn’t always agree on everything—that wouldn’t be good either—but I always felt like I could push back, and I always felt listened to. When the publishing process moved to the production phase, that listening and care remained. My editor and agent made sure I felt comfortable with any decision regarding my book, and I never felt pressured to do anything I didn’t want to do. They were and continue to be wonderful advocates for me and my work, and I am deeply grateful for that.

8. Would you recommend writers pursue an MFA?
Hmm, I think it depends on the writer, and the MFA, and many other circumstances.

9. Who is your most trusted reader of your work and why?
My friend Shruti Swamy, whose beautiful story collection A House Is a Body becomes a book in August 2020, because I trust her taste, and I trust her to tell the truth. When I say I trust her taste I mean that we both go to literature for similar things. What things are these? Ah, they are too mysterious to explain.

10. What’s the best piece of writing advice you’ve ever heard?
I’m not sure about best, but what they say about the Muse is probably true: If you keep showing up, eventually she’ll feel sorry for you and show up too.