This week’s installment of Ten Questions features Barbara Crooker, whose poetry collection Some Glad Morning was published in November by the University of Pittsburgh Press. In ekphrastic poems, sonnets, and various other forms, Some Glad Morning documents the quiet details of the everyday. In one scene, Crooker recalls a meal on a Portland wharf: the “translucent plate of oysters” and the “sunlit wedge of lemon.” Another poem, titled “Elegy,” begins with a simple fact: “Yesterday, an email telling me she’s gone.” Within a few lines these slight observations might shift seamlessly into meditiations on larger themes—climate change, war, visual arts—but the broad and philosophical never supplants the small and material, or vice-versa. No matter the scale of her subject, Crooker writes with the same respect and keen attention. “Barbara Crooker’s poems invite us into her garden, into castles and museums, into the rich complexity of life,” writes Carol Was. “She celebrates even the smallest moment showing us that time is as slippery as a silver fish.” Barbara Crooker is the author of eight previous collections, including The Book of Kells and Les Fauves. Her debut collection, Radiance, won the 2005 Word Press First Book Award and was a finalist for the 2006 Paterson Poetry Prize. Her writing has also appeared in Beloit Poetry Journal, Crab Orchard Review, and Midwest Quarterly, among other publications. Born in Cold Spring, New York, she lives in Pennsylvania. 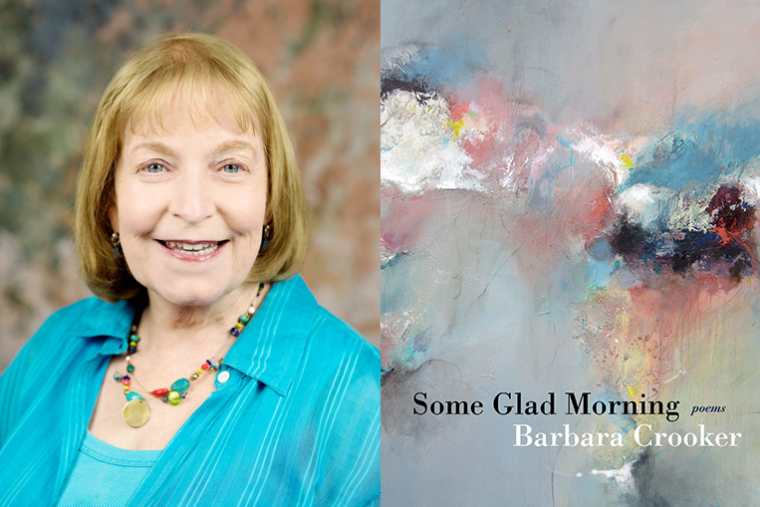 1. How long did it take you to write Some Glad Morning?
Most of the poems were composed in the last couple of years, many of them at the Virginia Center for the Creative Arts during several residencies, plus a residency at the VCCA’s studio in Auvillar, France. But the real answer is, “all of my writing life,” which is the past forty-five years or so. Whenever and whatever I write, I’m bringing everything I’ve learned in my practice of poetry to the writing table.

2. What was the most challenging thing about writing the book?
I think the most challenging thing every time I sit down to write is to make the poem on the page as alive as the poem in my head. Unlike my previous two books—Les Fauves, which focused on paintings and France, and The Book of Kells, which focused on the Book of Kells and Ireland—I did not set out to write the book that became Some Glad Morning; rather, I was just writing poems. When I was at the earlier-mentioned residencies, I spent a lot of time with recent work spread out over all of the available surfaces—tables, bed, floor—walking around them and looking for themes. Once I discovered what the poems were trying to tell me, I loosely organized them into sections and continued to write until I felt I had enough strong poems to make up a manuscript.

3. Where, when, and how often do you write?
I try to engage in the written word daily, whether it’s reading poetry or writing it. Some days are better than others. Sometimes I’m only able to write about writing: returning e-mails, writing blurbs, doing interviews. I did write and publish fifty book reviews, which taught me a lot about the variables of book construction. Some days I’m only able to read a couple of poems, write an image or a line. Some days I can read an entire journal or collection—I’m slow partly because I read everything twice, once for pleasure, once taking notes. But I keep going. Mostly, I write in big chunks when I have colony time, and little dribs and drabs when I don’t. But even when I’m not writing, I’m still thinking about writing. At a colony, I have a “room of my own”—Virginia Woolf knew how important that was. At home, I just have a corner of the dining room; most of my writing life, I’ve been caretaking for my son, who has autism, and so I had to be in a spot on the first floor where I could keep an eye and an ear out for him, and also so I could see when his bus arrived. He’s in a group home now, but I’m still here in this corner.

4. What are you reading right now?
As far as poetry: Agnostic by Christopher Buckley, Pilgrim by Jeanne Murray Walker, Somerset by Daniel Donaghy, Only as the Day Is Long by Dorianne Laux, Without My Asking by Robert Cording, More Than This by David Kirby, Incarnate Grace by Moira Linehan. For nonfiction: At Home in the New World by Maria Terrone, a memoir on the Italian American experience; Blessed Twilight by Bob Kunzinger, essays on Van Gogh. And a stack of journals. I’m always behind.

5. Which author, in your opinion, deserves wider recognition?
I’d say Christopher Buckley, whose work I’ve followed for years. He’s published twenty books, won some of the big prizes—he was a Guggenheim fellow, the recipient of a National Endowment for the Arts grant, a Fulbright, and four Pushcarts—but I don’t think he has the recognition he deserves. Buckley is a poet, critic, essayist, and editor whose work never disappoints. He consistently writes multi-paged poems that take you on unexpected journeys that startle and delight. I think he’s my polar opposite, in that I start out trying to write long poems that take their time, ramble, go down winding paths, but I seem to end up with small, short poems that fit in the palm of my hand.

6. What is the biggest impediment to your writing life?
My own life is the biggest impediment to my writing life! For the past thirty-five years I’ve been the caregiver for my son, which involved running a behavior modification program, implementing a gluten- and dairy-free diet, researching supplements and finding alternative doctors, driving to various therapies—speech, occupational, sensory integration training, hippotherapy horseback riding, vision therapy, auditory therapy—managing melt-downs, etcetera. For eight of those years, I also cared for my mother until her passing. And now my husband has shattered his right leg and will be unable to put weight on it for the next three months, which means no driving. I may only be dreaming about thinking about writing.

7. What is one thing you might change about the writing community or publishing industry?
I’m so far outside the loop of the writing community and the publishing industry, I can’t even see the loop. So there’s nothing I’d think of changing, as I’m just not part of anything. I have my writing friends and my friends in writing—i.e., my Facebook friends, most of whom I’ve never actually met—and that seems to me to be enough.

8. If you could go back in time and talk to the earlier you, before you started Some Glad Morning, what would you say?
If I could go back in time and talk to my earlier self, the one who sent out her first book to every contest for over twenty-five years—there’s a poem in that book, Radiance, called “Twenty-Five Years of Rejection Slips”—and who thought her first book would likely be posthumous, it would be to tell her not to be discouraged. Wonderful things, things you would never have dreamed of, will happen: having that first book win The Word Press First Book Award and later being named a finalist for the Paterson Poetry Prize. Being invited as a featured reader to the Library of Congress, the Geraldine R. Dodge Poetry Festival, Poetry at Round Top, the Scissortail Poetry Festival, Poetry by the Sea. Having Stanley Kunitz and Grace Schulman select poems for prizes—the Thomas Merton Poetry of the Sacred Award and the W. B. Yeats Society of New York Poetry Prize. And, most recently, having the Pitt Poetry Series invite me to send them this manuscript, Some Glad Morning.

9. Who is your most trusted reader of your work and why?
Marjorie Stelmach, who I met ten years ago on a residency; immediately we clicked. We are very different writers, with very different styles, but we both have the uncanny ability to see what needs to be edited in each other’s work. Sometimes, it’s as simple as changing punctuation or removing an article—we mostly just tinker—but then the whole poem falls neatly into place. We’ve tried to arrange residencies together when we can—she lives in St. Louis, I live in rural Pennsylvania—but mostly we do this by e-mail. I felt like she was with me when I was in residence two times at the Tyrone Guthrie Centre in Ireland, as I could send her a poem in draft before I went to bed at night, and get her response the next day. We keep begging each other to take our vitamins, to take care of ourselves so that we can continue to be there for each other.

10. What’s the best piece of writing advice you’ve ever heard?
“Who said you should be happy? Do your work.” Colette. “Have I done everything the poem requires of me?” James Dickey. “Use everything.” Sister Wendy Beckett.