This week’s installment of Ten Questions features Jeff VanderMeer, whose latest novel, Dead Astronauts, is out today from MCD/FSG. A work of science fiction, Dead Astronauts opens on the outskirts of a city with no name. Three figures appear through the dust. They have arrived here many times before—in different times and versions of themselves—always with the intent to destroy the ominous Company that has cast the world in the shadow of its biotech. Every mission has failed, VanderMeer writes, but “perhaps one day a certain kind of failure might be enough.” Slipping between various timelines and points-of-view, VanderMeer constructs a world and a mission in technicolor. As the figures trudge forward, he inhabits the minds of numerous others—a blue fox, a homeless woman, a fish. An exercise in destabilization, Dead Astronauts unhinges more than its own world, continuously questioning the broader insufficiencies and limits of the act of storytelling itself, particularly in the time of ecological disaster. “You want. Things to be words. That are not words. Could never be words,” one chapter begins. “VanderMeer is a master of literary science fiction, and this may be his best book yet,” writes Kirkus Reviews. Jeff VanderMeer is the author of numerous other works of fiction and nonfiction. Annihilation, the first novel in his New York Times-bestselling Southern Reach trilogy, won the Shirley Jackson Award and the Nebula Award. His recent novel Borne was also published to critical acclaim, receiving positive reviews from the New York Times, Los Angeles Times, and Washington Post. He lives in Tallahassee, Florida. 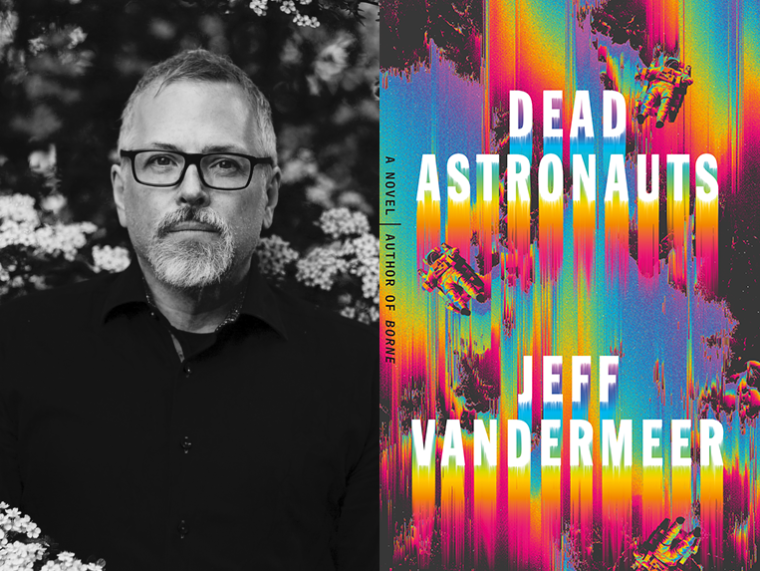 1. How long did it take you to write Dead Astronauts?
I find time is an inaccurate measure of creative writing. Did it start eight years ago with that scene fragment written on a leaf while hiking? And if so, was my subconscious building story around that note the whole time or only later, after my prior novel Borne was published? Did it actually start while finishing Borne and wondering about the enigmatic “dead astronauts” in the dusty courtyard of a ruined city? And if so, what was the “time” to write it? Did that time include all the moments of seeing bits of the world around me that meant something to the novel? Or did the clock start when I realized “dead astronauts” was the theme of the novel, not just “three dead astronauts”? Writing—the writing it down—has increasingly become the least important part of the process. Living in the world of the novel, existing as the characters, viewing the day-to-day from their perspective, is the most important thing. And that part feels like it exists outside of time.

2. What was the most challenging thing about writing the book?
I don’t know. Perhaps, initially, in thinking about the structure, knowing I’m not usually happy with novels that have multiple viewpoints that don’t vary their approach. I once read a very unsatisfying novel with ten different first-person viewpoint characters. So I decided I would see if I could use first person, third person, limited omniscient, second person, and variations on those in terms of distance or intimacy with the characters. The other vector or factor in character voice and the form and structure of the novel concerned a certain modulation of lyricism. Which is to say, within these different voices, connected by their struggle against ecological and societal disaster, some are intensely poetic and others come to their lyricism through a blunt muscularity, with, again, variations within each “realm.” This included use of prose poetry, a “found poem,” and a character so distributed across the sections that gray text denotes their presence. Related to this is how many voices are nonhuman, which is achieved in part by imagining these voices as still contaminated by the human, so as to bring coherence into play. Were these challenges? I don’t know. They’re the book.

3. Where, when, and how often do you write?
I live by the dictum of thinking about what I’m writing every day, but not necessarily writing anything down. Thinking deeply and richly about the fiction I want to write is most important. How that expresses itself on the page is variable. Sometimes I’ll write thirty thousand words in a weekend and then spend months honing it and understanding what it means. Other times I will write a scene a day or a scene in the morning and a scene in some other book in the evening. I do like to write in the morning, right after breakfast, but I have been known to write in the evenings. In my office. At the kitchen table. In a bar. In a coffee shop. Out in the yard. It’s important to switch it up. Once I’ve got most of a rough draft, I will usually switch to a more regimented approach: original text in the morning, revision of scenes in the afternoon, and line editing in the evening. I write almost all drafts longhand, then type them up, then back into longhand, to ensure I’m actually revising and not just moving words around the page. I want revision to be as radical and ecstatic a process as the original act. And each novel is different in approach—the rhythm and structure of an individual novel helps determine my process, which is meant to support that rhythm.

4. What are you reading right now?
I was a National Book Award judge, so the longlist faithfully represents some of my favorite reads of the year. But otherwise I’m reading the new Deborah Levy novel The Man Who Saw Everything—she’s a genius; the newly translated Clarice Lispector novel The Besieged City—another genius; and the graphic novel version of Andrea Wulf’s biography of Alexander Von Humboldt, The Adventures of Alexander Von Humboldt.

5. Which author, in your opinion, deserves wider recognition?
Nobody’s ever heard of Michael Cisco and he’s brilliant. More recently, I’ve become a huge fan of Audrey Schulman. Her Theory of Bastards is one of my favorite novels of all time. Someone should bring her backlist back into print.

6. What is the biggest impediment to your writing life?
It used to be a soul-crushing day job, but even that could be channeled method-acting-wise to help the fiction. I’ve been lucky enough to be a full-time writer since 2007, which comes with its own impediments—like, sometimes, wondering where the next paycheck will come from. But in two ways I’ve been fortunate: I knew by age eight that I wanted to be a writer and I also knew that I would continue to write even if I never had a career or even got published. That is a powerful and liberating thing to realize.

7. What trait do you most value in your editor?
Sean MacDonald is my editor at MCD/FSG, and he has been such a blessing. He understands my fiction—in all of its forms, not just one or two—and his edits and comments are so insightful. He’s also a very kind soul. What I most value is that he allows me the space to find my own solutions while being incisive and precise in his comments. I also prefer bluntness, which he can provide.

8. Who is your most trusted reader of your work and why?
My wife, Ann. Because I can talk about works in progress with her and not get writer’s block. Anyone else, I get blocked. So often novels are better even in rough draft form because of those conversations—about characters, situations, etcetera.

9. What is one thing you might change about the writing community or publishing industry?
More diversity in editorial hires is a huge thing. It’s so important—and that includes folks who are gatekeepers proactively mentoring the next generation.

10. What’s the best piece of writing advice you’ve ever heard?
Honestly, I generally learn best by finding the exception to the rule, which allows me to understand the rule. But one piece of advice I would give: Don’t divorce the craft of writing from the art of writing. The whole point of consciously absorbing more and more writing technique—even at the micro level of where you begin and end scenes—is it allows you to be more versatile in your art. There are plenty of unpublished writing geniuses out there who never understood that. Once you stop picking up technique, you begin to ossify—in your art. And part of how craft supports art is knowing what should be organic and what can be mechanical. You can mechanically improve your writing in certain ways, while other parts, like how your subconscious processes or creates narrative, should be left alone.