This week’s installment of Ten Questions features Jeffrey Colvin, whose debut novel, Africaville, is out today from Amistad. Shifting across the continent—from Nova Scotia and Quebec to Vermont and Alabama—Africaville concerns three generations of the Sebolt family as their lives unfold in the twentieth century. The story opens in 1918 with Kath Ella Sebolt, a young girl growing up in a small town in Nova Scotia that was settled by the descendants of slaves from the American South and Caribbean. The Sebolt story unfurls from this Atlantic outpost: Kath Ella obtains one of the few college scholarships offered to Black students in 1930s Canada; she bears a son, Omar/Etienne, who travels to America in the midst of the Civil Rights movement; and his son, Warner, carries the reader as the end of the century approaches. Rich in historical detail, Africaville traces the complex political realities of various eras through its vividly imagined network of relationships. “Despite departure and distance, Africaville ultimately proves to be a tenacious reclamation of story, of place, of belonging,” writes Terry Hong. Jeffrey Colvin is an assistant editor at Narrative magazine. His work has appeared in the Millions, Rain Taxi Review, and the Brooklyn Rail, among other publications. In addition to studying at Harvard University, the United States Naval Academy, and serving in the United States Marine Corps, Colvin received his MFA in fiction from Columbia University. He lives in New York City. 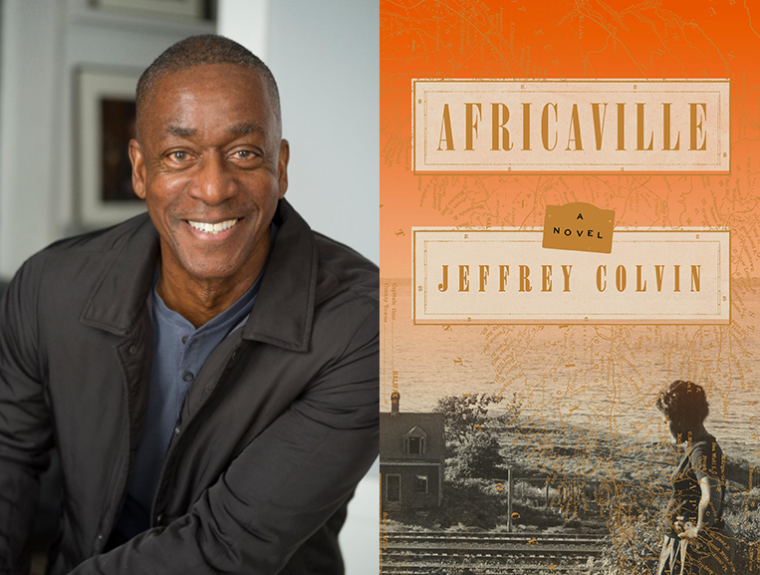 1. How long did it take you to write Africaville?
My debut novel began as a short story in the late 1990s. The story was set in a rural Black community in Alabama like the one where my grandmother raised a family. I did not envision this short story as part of a larger narrative until I read an article in the New York Times in 2001 about a black community called Africville that once existed on the northern edge of Halifax, Nova Scotia. Several reasons the novel took so long to complete will be familiar to many artists who work on creative projects that are large in scope. After getting an MFA I had to return to working again to earn money. In addition I had a very difficult stretch of years in which I lost both my parents and two sisters. The novel also required a tremendous amount of research including many trips to the southern United States and to Canada.

2. What was the most challenging thing about writing the book?
I wanted to explore how the pull of a community like Africaville could affect a family over several generations. Kath Ella Sebolt, the matriarch of the family grew up in Africaville but moves with her son, Etienne, to Montreal. Etienne later moves to Vermont and then to Alabama where his son, Warner, grows up. I knew what might pull the second and third generation toward cherishing their ancestral home in Canada—including the town’s unique history and the continued efforts by former residents to keep the town’s memory alive. But deciding what elements would estrange subsequent generations from Africaville was more difficult. Writing about Black characters who were light enough to pass for white was also a challenge since I did not want to rely too heavily on what I knew about being a Black person living in America. I had to imagine the life of characters who shared some of my own history but had their own unique ways of being in the world.

3. Where, when, and how often do you write?
In my New York apartment, I have a small space dedicated to writing. But I tend to be nomadic, traveling all over New York City in search of quiet spaces, usually libraries. For a long while I wrote in short stretches between working gigs and on the weekends. For the past six months I have been getting up in the morning around seven and writing until the early afternoon.

4. What are you reading right now?
I am reading The Healing by Gayl Jones. It has taken me a while to get through it because I am savoring the prose. Reading the novel, I gain so many ideas about how to approach my own writing, not to mention being moved by many of the emotional scenes. I have also become engrossed in I Tituba, Black Witch of Salem by Maryse Condé.

5. Which author, in your opinion, deserves wider recognition?
I will mention Gayl Jones again. She is a wonderful writer whose ascendance during the late 1990s was watched by many avid readers. She has since receded from much public discussion. Her debut novel, Corregidora, and her novel The Healing deserve wider current recognition.

6. Would you recommend writers pursue an MFA?
I can only offer that an MFA program provided me time to devote to my writing without the drain of full-time work. I also benefited from access to a community of teachers and fellow writers, and I was exposed to works of literature I may not have encountered when reading on my own.

7. What is one thing that your agent or editor told you during the process of publishing this book that stuck with you?
You’ll only have the thrill of being a debut author once. Work hard but also try to enjoy the experience. Part of the advice has been difficult to achieve because the period of an author’s debut comes with much anxiety!

9. Who is your most trusted reader of your work and why?
My literary agent, Ayesha Pande, has been an excellent reader, providing just the right mix of being thorough, incisive, and tough, but also supportive.

10. What’s the best piece of writing advice you’ve ever heard?
The best advice I have heard works for many aspects of my life. Concentrate on your own work every day to make it better. Do not worry so much about what others are doing, or get caught up in comparing yourself to others, particularly those you consider more successful.