This week’s installment of Ten Questions features Amanda Michalopoulou, whose novel God’s Wife, translated from the Greek by Patricia Felisa Barbeito, is out today from Dalkey Archive Press. In the windowless laundry room of the “Heavenly House,” God’s wife begins writing out her improbable story. She anticipates a reader, “you,” who she implores to listen. Her life changed immeasurably when she met God: Notions of time and space gradually collapsed, and she began to forget “the meaning of the most basic things: a slap in the face; sewing back a button hanging by its thread; enclosing arms offering comfort.” Writing her thoughts down—and the imagining of “you”—is the beginning of her regaining some sense of reality: “The miracle is your existence, not His,” she says. With a startling premise and succinct prose, Michalopoulou offers a profound meditation on what it means to be a relational being; to seek and fight for faith, friends, and family; and to read and write. “God’s Wife is a stunningly brilliant book. At every turn, it avoids obviousness and cliché,” writes Simon Critchley. “Crisp, clear, clever, and compelling.” Amanda Michalopoulou is the author of eight novels, three story collections, and more than a dozen children’s books. Her work has been translated into twenty languages; in addition to God’s Wife, two others have appeared in English: I’d Like (Dalkey Archive Press, 2008) and Why I Killed My Best Friend (Open Letter, 2014). She lives in Athens, Greece. 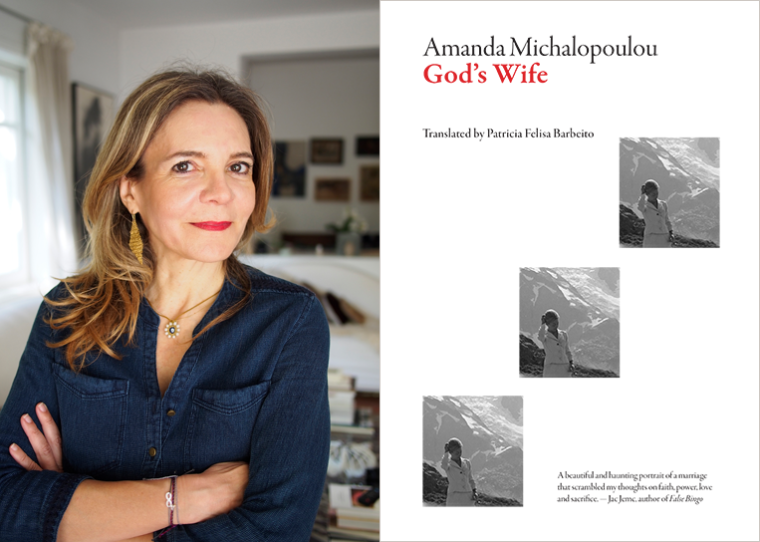 1. How long did it take you to write God’s Wife?
I wrote it between 2012 and 2014. The first year was an intense customized course in theology, philosophy, and a bit of quantum physics. Then I wrote twice as many pages as there are now, and I had to cut that draft extensively.

2. What was the most challenging thing about writing the book?
When you conduct a lot of research you want that material to show up on the page. But I am still preoccupied with the thought that I should have cut more. My excuse was that the narrator, God’s wife, was a newborn student and the enthusiasm of an acolyte should show, until she was over and done with it all.

3. Where, when, and how often do you write?
I write every day when I am in the middle of a novel. And I write intensely when I am in the middle of a short story or a poem. At all other times I blame myself for not writing. As for where: I write all over the place. Writing looks and feels ideal during writers’ residencies, because time is dedicated to writing and talking to other writers, listening to their stories and their worries. God’s Wife was partly written at the Shanghai Writers’ Association residency and at the Bogliasco Foundation in Italy. I also vividly remember writing at the Edward Albee Foundation in Montauk, the Bellagio Center, and Djerassi Resident Artists Program, revising at Art Omi and Blue Mountain Center, and spending a winter at Literarisches Colloquium Berlin, in front of a perfectly frozen lake. But even when I don’t write—indeed, I didn’t write much during my recent stint at the University of Iowa’s International Writing Program—I think about writing in a focused, almost religious way.

4. What are you reading right now?
The Time of the Doves by Mercè Rodoreda, a Catalan writer who wrote exquisitely about the Spanish civil war. And Eros the Bittersweet by Anne Carson—she is one of my favorite writers and a favorite person too! I’ve never met someone who speaks so tenderly about the intellect. I also like what Maggie Nelson does, how she speaks intellectually about matters of the heart, which is quite the opposite of Carson. I just finished her wonderful Bluets.

5. Which author, in your opinion, deserves wider recognition?
The Greek short story writer Elias Papadimitrakopoulos. And the French Annie Ernaux, a magnificent writer of auto-fiction.

6. What is the biggest impediment to your writing life?
The fact that whenever I am stuck, I can’t face silence and darkness—that kind of silence and darkness that only existed before the internet. I am constantly looking something up online, pretending I need this or that for my work, when all I need is patience and time.

7. What is one thing that your agent or editor told you during the process of publishing this book that stuck with you?
In Greece our fellow writers become our editors. One of them told me, “Don’t try to impress people with what you know, let the story talk.”

8. What is one thing you might change about the writing community or publishing industry?
In Greece? Start employing editors, and stop leaving the writers all alone in the editing process.

9. Who is your most trusted reader of your work and why?
My seventeen-year-old daughter. She is one of the best readers I know and in that stage of life where she is impatient with me and strict but still shows some mercy, which is close to having a professional editor I guess.

10. What’s the best piece of writing advice you’ve ever heard?
I don’t know who said it, but I use it when I teach: “If a sentence catches fire, which words are you going to rescue?”