This week’s installment of Ten Questions features Laura Sims, whose first novel, Looker, is out today from Scribner. “A tightly coiled novel about the poison of resentment,” in the words of Idra Novey, Looker descends into the increasingly unhinged mind of a woman whose obsession with her neighbor unravels after an altercation with the beautiful actress at an annual block party. Earning comparisons to the voice of Ottessa Moshfegh and the psychological fascinations of Paula Hawkins, Sims’s novel dissects our image-obsessed, media-saturated culture while offering a compelling story of a sympathetic character on the edge. Sims is the author of four books of poetry, most recently Staying Alive (Ugly Duckling Presse, 2016), and the editor of Fare Forward: Letters From David Markson (powerHouse Books, 2014). She lives outside of New York City with her family. 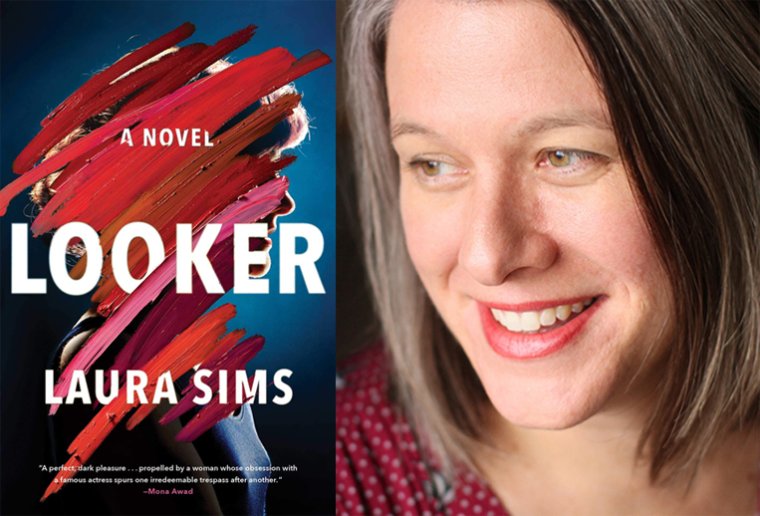 1. How long did it take you to write Looker?
About three years, off and on. I wrote the first sixty pages or so by hand, in a kind of frenzy, after hearing my narrator’s voice speak what would become the novel’s first line. Then I wrote it in bursts whenever I could. I was juggling it with teaching, library science grad school, and other writing projects at the time, but towards the end of that period it became my focal point.

2. Where, when, and how often do you write?
I try to write every weekday morning, when I have the most energy, from about 8AM to 11 AM. I write at home, in my upstairs office/guest room, at the library, or at a local co-working space. I like mixing it up to stave off tedium…and the threat of sleep. Working from home can definitely be dangerous in that regard; sometimes I need to leave the house to keep myself focused and motivated.

3. What was the most unexpected thing about the publication process?
How much happens before the book comes out, and how it requires an incredibly dedicated team of people to bring a single book into the world. My own experience with publishing poetry in the small press world hadn’t prepared me for that; publishing with an indie press is also reliant on a team but that team could consist of one or two (motivated, saintly) people, wearing all sorts of hats. But in the case of commercial literary fiction, you have an agent, an editor, a marketing team, a publicist, proofreaders, lawyers, and so on, and things start to wind up at least six months before the book’s publication date. It’s a whirlwind!

4. Would you recommend writers pursue an MFA?
This is a tricky question for me. I have an MFA, and I’m very grateful to have it because it “certified” me to teach at the college level, as I’ve done for many years. But when my students ask me that same question, I pause and consider the individual. If it’s something they feel they absolutely have to do, and I can see that it feels necessary to them, then I tell them to go for it. If they see it as a way to spend two years focusing on their writing and it won’t put them into massive debt, then I say go for it. If they think it will secure some sort of future path as a writer and/or writing professor, though, that’s a longer discussion. It’s hard to get published, and teaching jobs are scarce even if you publish well. I don’t think an MFA is necessary, but at the same time it can be a good way to connect with other writers, get regular feedback, and grow as a writer. You can also do that out in the real world, though, through community workshops and just plain old life experience.

5. What are you reading right now?
Kudos by Rachel Cusk. I love this trilogy of hers so much, I wish it would go on forever. I don’t know what she’s going to do next, but those last three books are gorgeous and important and also, somewhat magically, fun to read. I also recently read Circe by Madeline Miller, I have to add. Another beautifully written, wonderfully entertaining book, just as good as her first, Song of Achilles. I’ve been recommending all three of these to everyone I know lately.

6. Which author, in your opinion, deserves wider recognition?
The novelist David Markson. He’s been something of a cult figure for many years, but he’s never had a breakthrough moment in the way that other “difficult” writers like W. G. Sebald have. In any case, his last four books, This Is Not a Novel, Reader’s Block, Vanishing Point, and The Last Novel, form a combined masterpiece of formal innovation and emotional resonance that have informed and influenced my writing (and life) since I began reading him in 2004. Reading Markson was a truly life-changing experience for me, and I can’t say that about many novels, even ones I’ve dearly loved.

7. What is one thing you’d change about the literary community and/or the publishing business?
The one thing I’d change is, I think, changing already: the insularity of the literary and publishing world. Thanks to the advent of social media, blogs, etc., more of the reading public participates in a discussion that was once controlled by a select few. Booksellers, bloggers, librarians, and bookstagrammers now have a lot of say in how a book is received, and mainstream publishers have had to adapt in response. I was impressed, during the pre-publication process for Looker, at how skillfully the marketing team at Scribner used Instagram and Twitter, multiple giveaways on Goodreads and elsewhere, and good old-fashioned hand-to-hand and face-to-face marketing to get the word out about my book.

8. What is the biggest impediment to your writing life?
Right now, just before my novel’s due to come out, the biggest impediment is…the novel that’s about to come out! No, it’s actually all of the necessary business and noise that swirls around having a book come out, all of which I’m happy to do and grateful for, but all of which is also distracting me from the essential business of sitting down and working on my next novel-in-progress. I want to blame my smartphone, but really the impediment is me.

9. What’s one thing you hope to accomplish that you haven’t yet?
I’d like to finish my MLS degree before the year is out! I’ve been inching along towards that goal for several years now, and am currently on hiatus, but I just have a few classes to finish before I can join the corps of working librarians.

10. What’s the best piece of writing advice you’ve ever heard?
At one point in my life, when I was juggling more things at once, trying to “do it all,” the best piece of advice came from the aforementioned novelist David Markson, who was a dear friend and told me, “Do your own fucking work!” By that he meant I should stop spending my time on smaller, largely self-assigned writing pieces, or class prep, or other things, and devote myself more fully to doing my own writing. It really did help me take a look at how I was spending my time—this advice came from someone at the end of his life, mind you. I started to say “no” to things when I could, and because of that my life is more streamlined now than it was, say, five or ten years ago. It helped me really zero in on Looker and finish it, in fact. Another excellent piece of advice was something that Richard Ford said to my husband when he met him after a reading: “Be at your station.” The two quotes go well together, actually: Butt in chair, do the work. It’s the most basic and important writing advice there is.

“I come up with a form and then find a way to ‘translate’ my thoughts into the form. It wasn’t always like that, but that’s the way it is now. I used to think in lines.” —Elisa Gabbert, author of The Word Pretty