This week’s installment of Ten Questions features Andrea Gibson, whose new poetry collection, Lord of the Butterflies, is out today from Button Poetry. Exploring questions of gender, identity, love, loss, family, and politics, the poems in Gibson’s book “seamlessly spin hopelessness into hope, fire back at social norms, and challenge what it means to be human,” writes Them magazine. An LGBTQ activist and one of the most celebrated spoken-word poets in the country, Gibson (who uses gender-neutral pronouns) began their career in poetry in 1999 with a break-up poem performed at an open mic in Boulder, Colorado; since then they have gone on to win four Denver Grand Slam titles and in 2008 won the first-ever Woman of the World Poetry Slam. Gibson has performed on stages throughout the country, is the author of four previous books of poetry, and has released seven spoken-word albums. They live in Boulder. 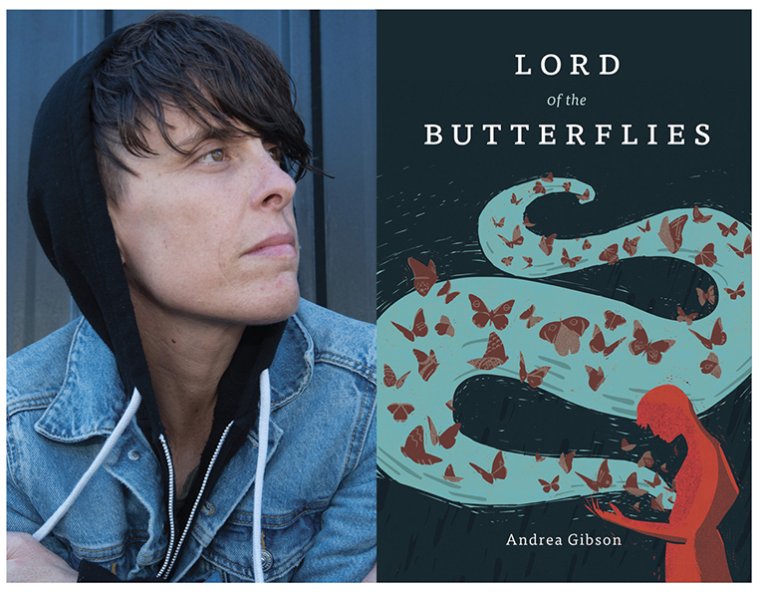 Andrea Gibson, author of Lord of the Butterflies.

1. Where, when, and how often do you write?
I tour quite a bit and struggle to find time to write on the road. When I’m not touring I write constantly, sometimes up to ten hours each day as it’s the most fulfilling and nourishing blessing in my life. I write at home, in any room where I can close a door behind me and have privacy because I most often write out loud, sometimes yelling, sometimes whispering at the walls, and that’s an awkward (and comical) thing to have anyone witness. I very rarely write sitting still. I pace and pace until the poem finds its way to the page.

2. How long did it take you to write Lord of the Butterflies?
It was written over the course of two years, the first poems sparked by the massacre at the Pulse Nightclub in Orlando, and others by the election of Trump. Like many writers, I’ve never in my life created so much as I have in response to our current political climate. I actually had to contact the editor several times to see if I could add one more poem to the book, as I was writing so much up until the final due date.

3. What was the most surprising thing about the publication process?
This is my first book published with Button Poetry and it’s been fascinating to watch what goes into putting out a book with a publishing company that has such a large online/video/social media presence. I’d admired Button’s model for quite a while, specifically because of how many youth have fallen in love with poetry because of them, and I’ve been mesmerized by all of the different mediums they highlight in the release process.

4. What is one thing you’d change about the literary community and/or the publishing business?
I’ll speak to something I’ve seen significant positive changes in over the years, something I’d like to see continue to keep changing for the better—and that’s the publication of writers who might have been previously classified as “slam poets” or “spoken word artists.” To be skilled in the art of performing one’s poem doesn’t negate how powerfully that poem can live on the page. Great poets like Danez Smith are proving that both spaces can be mastered by an artist, and it’s been beautiful to watch more and more people recognize that.

5. What are you reading right now?
I’ve been reading a lot of poetry—currently Jeanann Verlee’s Prey and Lino Annunciacion’s The Way We Move Through Water. I also just finished Peter Rock’s novel My Abandonment, which I picked up after reading it was one of Hanya Yanagihara’s favorite books. And I’m finally, after many recommendations, reading Lidia Yuknavitch’s The Chronology of Water.

6. Who is the most underrated author, in your opinion?
The first who comes to mind is Donte Collins, mostly because I think this author could win every prize there is to win and still be deserving of more. When I first heard Donte read I was stunned, pummeled by beauty, like that twenty-minute reading would be enough light to sustain me for a year.

7. What trait do you most value in an editor?
The ability to be blunt. As harsh as it may sound it’s really important for me to know I have an editor who is willing to say, “Take this entire poem out of the manuscript.” And that’s not to say I don’t have feelings when that happens, but that kind of honesty helps me feel significantly more solid about what I’m putting out.

8. What is the biggest impediment to your writing life?
I’m a very slow writer. Some wouldn’t think so because I put out new work quite often, but that’s only because of the number of hours I spend writing. It’s not rare for me to spend twelve solid hours going over and over a single stanza.

9. What’s one thing you hope to accomplish that you haven’t yet?
It’s a dream of mine to one day write a musical. When I’m writing poems I almost always write to music, and I collaborate with musicians often during live performances. I’ve always been hyper focused on how the words and rhythm live out loud, and I’m constantly writing songs in my head. I think it would be a magical experience to collaborate on a production that features so many different artists.

10. What’s the best piece of writing advice you’ve ever heard?
“Write what you are terrified to write.” When I was first given that advice I struggled to write for almost a year because I wasn’t yet ready to write what I was afraid to write, and I didn’t want to waste my time writing anything else. These days, I consider that advice every time I begin a poem. I pay attention to what requires courage to say, and I do my best to try to say it.