This week’s installment of Ten Questions features Guy Gunaratne, whose debut novel, In Our Mad and Furious City, is out today from MCD x FSG Originals. Inspired by the real-life murder of a British soldier at the hands of religious fanatics, Gunaratne’s novel explores class, racism, immigration, and the chaotic fringes of modern-day London. Longlisted for the 2018 Man Booker Prize and shortlisted for the Goldsmiths Prize and Gordon Burn Prize, In Our Mad and Furious City tells a story, Marlon James says, “so of this moment that you don’t even realize you’ve waited your whole life for it.” Gunaratne was born in London and has worked as a journalist and a documentary filmmaker covering human rights stories around the world. He divides his time between London and Malmö, Sweden. 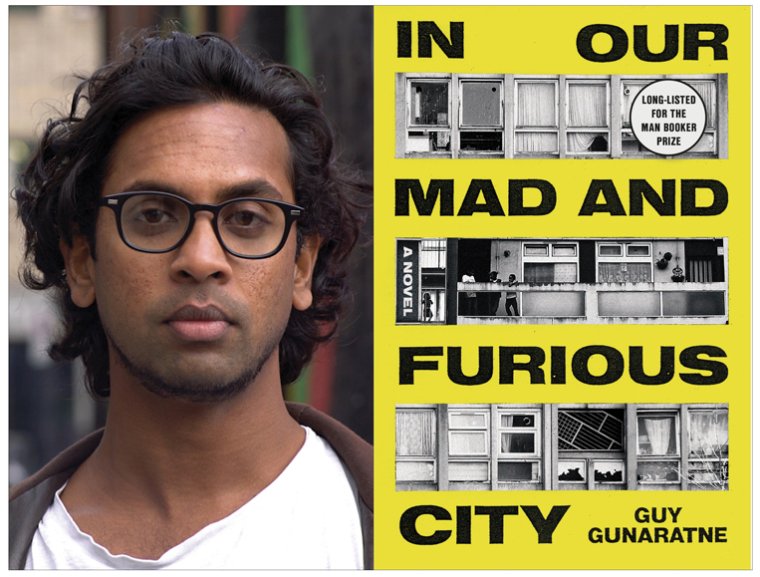 Guy Gunaratne, author of In Our Mad and Furious City.

1. Where, when, and how often do you write?
I write in my study, in Malmö. A large wooden desk, surrounded by books set where I left them. I write as much as I can, when I can. The most focused period tends to be early mornings, between 5 AM and 6 AM to 9 AM, and then in dribs and drabs throughout the day.

2. How long did it take you to write In Our Mad and Furious City?
The novel took about four years to write the initial manuscript and then another year with my editor. As someone who enjoys the solitary commitment of writing, I didn’t quite know what to expect in terms of collaborating on it. I’ve found the process to be rewarding and instructive.

3. What trait do you most value in an editor?
Patience, probably. And space. Once when working on In Our Mad and Furious City, my editor and I were working on a specific part of one character’s voice. She asked me to go away and think about a few specific things. She gave a list. “Just think,” she said. She gave me the time to simmer, which I think is important when making any significant change.

4. What was the most surprising thing about the publication process?
I try, sometimes with difficulty, not to be cynical about the relationship between art and industry. My hopefulness comes from knowing that there are usually enough dedicated people in any industry who are committed to doing good work. My surprise comes from finding out that I’d actually underestimated the amount of good people I’d meet during the process.

5. What is one thing you’d change about the literary community and/or the publishing business?
I think about this more as a reader than as a writer. I think we can all agree that homogeneity in any industry is unbearably boring. I’m interested in reading anything surprising, challenging, and provocative, in the best sense of the word. But I do wonder, at least with my experience thus far, how anything truly new, different, or challenging can ever come out of an industry that looks and acts so conservatively. There is still vitality here, and a desire to experiment with what gets published. The challenge is in encouraging those voices to keep on.

6. What are you reading right now?
I’m currently reading a nonfiction book called Rojava by Thomas Schmidinger, which is about the Kurds of Northern Syria. And I’ve finally got around to Samanta Schweblin’s Fever Dream.

7. Who is the most underrated author, in your opinion?
More people should be reading Machado de Assis and Nawal El Saadawi. But I think, more generally, people should be reading translated fiction. One of the beautiful things about the novel is its capacity to offer the reader a way to transgress beyond the parochial or familiar. It opens new territory to explore. At times it can even help confront learned biases that you wouldn’t have known were there. Many of my most surprising and enriching experiences have come from reading translated fiction.

8. What is the biggest impediment to your writing life?
Inevitably, there was always going to be a degree of friction because of the time I now commit to the public side of all this—the events, publicity, the travel. I think I underestimated how much all that would impact the other side, the writing side. Not to say I don’t like the public facing part. Engaging with readers, for example, I think is hugely rewarding. I find it a privilege, honestly. But I do find myself missing home quite a bit. I find that I need to have an extended period writing in once place in order to gather momentum. Sadly, I’ve been flitting back and forth, which doesn’t help.

9. What’s one thing you hope to accomplish that you haven’t yet?
I don’t have any external goals with my writing, not really. Right now I just want to write, publish, and keep writing. If I’m still writing novels in my sixties, it would mean that I would have attained something I had once thought impossible. Namely, a writer’s life.

10. What’s the best piece of writing advice you’ve ever heard?
I can’t remember who spoke about this, but there was something I heard early on which I get the sense has become more and more apparent as I continue to write. It’s simple really, it’s just that there is something about your own subconscious that is far more perceptive than whatever your conscious mind can conjure up. Being attentive to allowing that stuff to come through, to trust in allowing a degree of exploration as you write. This has become very important to me, and useful to know, too, any time I sit and stare at a blank page. You’ve got to get out of your own way.

“I have learned that it isn’t wise to wait for inspiration; inspiration will meet me at my desk.” —Oyinkan Braithwaite