This week’s installment of Ten Questions features Jess Row, whose essay collection White Flights: Race, Fiction, and the American Imagination is out today from Graywolf Press. In essays exploring race in the imaginative life of Americans, from the end of the civil rights era to the present, Row ties the movement of white Americans into segregated communities, such as suburbs and gentrified neighborhoods, to white writers setting their stories in isolated or “emotionally insulated” landscapes. In close readings of work by Don DeLillo, Annie Dillard, Richard Ford, and David Foster Wallace, he illustrates how these and other writers have cleared imaginitive space for themselves at the expense of engaging with race. Jess Row is the author of the novel Your Face in Mine and the story collections The Train to Lo Wu and Nobody Ever Gets Lost. White Flights is his first book of nonfiction. One of Granta’s Best of Young American Novelists of 2007, he lives in New York and teaches at the College of New Jersey. 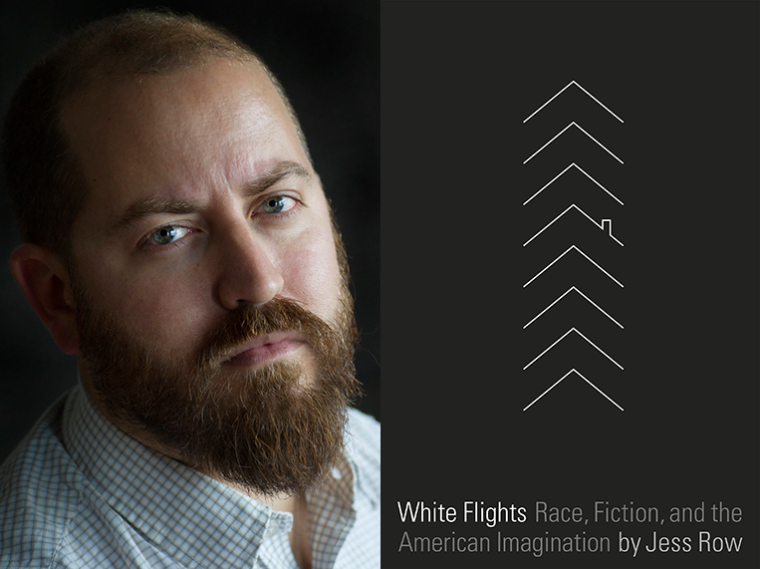 1. How long did it take you to write the essays in White Flights?
Quite a while! I began writing essays about race and American fiction back around the time I started writing my novel Your Face in Mine, which takes us all the way back to 2010. I published the essay that contained the kernel of the book’s argument, “White Flights,” in the Boston Review in 2013. But honestly most of the writing took place after I signed up with Graywolf in the spring of 2015. I’d say at least 80 percent of the book was written in a focused way between 2015 and 2018.

2. What was the most challenging thing about writing the book?
Because whiteness is a vast and amorphous subject—because it largely exists without being talked about, identified, or even noticed—the biggest challenge was narrowing down what I wanted to say and which writers I wanted to engage with. There are so many white writers whose work could have been part of this project—Annie Proulx, Ann Beattie, and then of course many postwar writers like Cheever and Malamud and Updike and Bellow, all of whom play a part in the construction of American literary whiteness and what might be called the “white sensibility.” But I couldn’t do it all.

3. Where, when, and how often do you write?
Whenever I can. My kids are nine and twelve, and much of my life revolves around them, of course; I have a full time academic job at the College of New Jersey, which involves a long commute from my home in New York, so my writing time has to be very carefully carved out and protected. I try to dedicate whole working days to writing, at best three (but usually two) days a week during the academic year. I would not have been able to finish this book without a Guggenheim grant, which allowed me to take off a whole year from teaching—the first time I’ve done that since I started working full time in 2001. I also was invited to be a visiting professor at NYU in 2016 to 2017, which meant I didn’t have to travel to work, and I wrote a lot of the book then as well.

4. Who is your most trusted reader of your work and why?
My wife, Sonya, absolutely. She’s very honest, and almost always right, although we’ll argue forever about what goes into that “almost.”

5. What are you reading right now?
I read a lot of books at once, and I only read books on paper, which may explain why I’m nursing a shoulder injury this summer! Books are heavy. Among other things I’m reading Octavia Butler’s Parable of the Sower, her dystopian novel about climate change and the collapse of the U.S. state, which I’ve honestly been afraid to read until now—and for good reason. It’s astonishingly, horrifyingly accurate for a novel written in 1993. I’m also reading Uwe Johnson’s mammoth novel Anniversaries, which was translated just recently for the first time from German and published by NYRB Classics last year. It’s in some ways very similar to the novel I’m working on now, The New Earth, in that Johnson was trying to capture the feeling of New York at a chaotic and terrible moment, 1969, and I’m doing a version of the same thing (not just in New York, but rooted in New York) in 2018.

6. Which author, in your opinion, deserves wider recognition?
For years my standard answer to this question was James Baldwin, whose Another Country is probably the single most important American novel of them all, in my humble opinion—but Baldwin has now received a share of his long-overdue recognition. So I’ll say Henry Dumas, another great writer of the 1960s who was killed by the police in New York in 1968. His collected works, Echo Tree, is a book everyone should own.

7. What is one thing that your agent or editor told you during the process of publishing this book that stuck with you?
Fiona McCrae, who acquired the book at Graywolf, and I had a lot of conversations in the early stages about the role of anger and antagonism in literary criticism. Some of the essays I originally published in magazines that went into the first draft of White Flights were, for lack of a better word, snarky. Intentionally so. She was concerned that the book be as thoughtful and exploratory as it could possibly be, and she didn’t want anything I wrote to be perceived as a cheap shot. As I got further into the project, it became clear to me that she was entirely right, not because anger isn’t a necessary part of criticism, but because, in my view, the anger has to be directed at the structural forces that make racism work (and the political leaders who consciously and intentionally make use of those forces). In most cases—not all—the white writers I talk about in White Flights aren’t intentionally racist; in many cases they’re trying hard not to be racist, but in simply telling stories the way they want to tell them, they’re exposing the structure and formation of a racist culture (and, unfortunately, sometimes perpetuating it.) Which is something I have done too. I’m as implicated in this as anyone.

8. How do you balance your day job with your writing?
Writers are artists, which means that (in my experience, anyway) we have to work hard to protect our creative time, our imaginations, in the midst of all the other parts of our lives—not just work but family, bills, laundry, taxes, car repairs, and so on. For me it’s all about creating psychic, emotional boundaries, so that I have time to feel free and unencumbered while I’m working, no matter what else is going on. That’s a real struggle, of course. I don’t really believe in balance; I believe in trying to sustain a feeling of wholeness, which means, in large part, taking care of other things you need to do so that you can feel free in your work, and also realizing that success in your career is only one part of a larger whole, which involves paying attention to your physical health, your relationships, your children and partner, your religious practice, your financial obligations, and so on.

9. What is the biggest impediment to your writing life?
I have many fewer impediments to my writing life than most writers, god knows! The impediments I do have are mostly emotional, and are shared by just about every writer I’ve ever met: self-doubt, envy and the constant urge to compare oneself with others, anxiety about success, fear of not finding the right material, or not doing right by your material, fear of cultural irrelevance, wanting more readers, worries about the changing nature of publishing (and whether publishing will exist in any recognizable form twenty or thirty years from now). And on top of all of that, in the present moment, wondering whether any kind of art can address the crises of racist nationalism and environmental collapse in our time.

10. What’s the best piece of writing advice you’ve ever heard?
Neither of these are pieces of writing advice, but they’re two of the most meaningful things I’ve ever encountered about making art. First, from Liz Phair, in the context of a song in which she’s addressing a romantic partner: “Everything you say is so obnoxious, funny, true, and mean.” That’s more of a credo for my fiction than my nonfiction, because I don’t want to be mean, particularly in the context of a book like White Flights, but I would like to be true, obnoxious (in the sense of pointing out the obvious) and at least a little bit funny. The second, from Peter Tosh: “Live clean, and let your works be seen.” That’s a life motto that can interpreted many ways, and some will find it vague and useless, but I’ve tried to live by it in my own way since I first heard it in high school.