This week’s installment of Ten Questions features Courtney Maum, whose novel Costalegre is published today by Tin House Books. The story of fourteen-year-old Lara, whose mother, the quixotic American heiress Leonora Calaway, has brought her and a group of surrealist artists to an isolated compound in Costalegre, on the coast of Mexico, in 1937, Costalegre is a portrait of a young girl looking for someone to love her. Inspired by the relationship between Peggy Guggenheim and her daughter, Pegeen, the novel is, as Samantha Hunt wrote in her prepublication praise, “as heady, delirious, and heartbreaking as a young girl just beginning to fall in love with the world.” Courtney Maum is also the author of the novels Touch (Putnam, 2017) and I Am Having So Much Fun Here Without You (Touchstone, 2014); the chapbook Notes From Mexico (Cupboard Pamphlet, 2012); and the handbook Before and After the Book Deal, forthcoming from Catapult. Her writing has been widely published in such outlets as BuzzFeed; the New York Times; O, the Oprah Magazine; and Modern Loss. She is the founder of the Cabins, a learning collaborative in Norfolk, Connecticut. 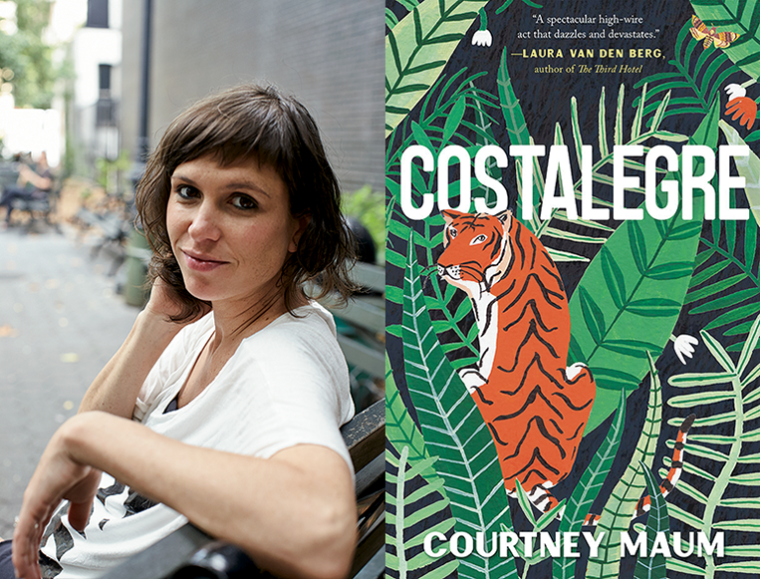 1. How long did it take you to write Costalegre?
It was a two-part process. I researched for the better part of a year, and I had a very specific way in which I “digested” my research. I’d transcribe notes into a journal, and when it was full, I would yellow-highlight the most salient facts, and then those would go into a new journal, and from that journal, I would do the yellow-highlighting filtration thing again. Rinse and repeat until I put all of my favorite facts onto a giant piece of sturdy watercolor paper. By that point, I’d basically memorized the stand-out events that I wanted to use, so when I sat down to write the book, I was able to do so very quickly, as if I was writing a diary of events I’d actually lived; of dreams that I’d had. I had a first draft completed in a month. Things changed in revision, of course, but it’s probably the first time in my career that my first draft so closely resembles the finished one. Usually my first draft is just a blueprint of what is to come, and most of the text in that draft doesn’t survive the revision process.

2. What was the most challenging thing about writing the book?
You know, I have to say that I enjoyed absolutely everything about writing Costalegre. I enjoyed the research, I adored the writing process, and I had a really good experience editing it with Masie Cochran at Tin House. I think the hardest part of writing this particular book was knowing that it would have to transition from this private, curious thing into a “product” that the public would find out about, would not find out about. Would buy, would not buy. This is my third novel, so I’ve learned by now that you can’t plan or “expect” anything in publishing. Plus, I work in marketing and branding on the side, so it’s extra challenging for me to turn off the part of my brain that understands market forces, book sales, public relations, and all that. Definitely the most challenging thing was to not think about the commercial viability of this project so that I could write the book I needed to write.

3. Where, when, and how often do you write?
I write my best at home, alone, in silence. I have a nice desk in my bedroom with a lovely view of our yard. That is where I write best. I have a Draconian schedule that has worked well for me over the years. I front load my week: Mondays and Tuesdays are for my writing, only. Other writing—blurbs, book reviews, essays, my marketing and branding work—I tackle that on the other days. I find I’m less resentful about replying to e-mails and whatnot if I’ve given my own writing everything I’ve got in the beginning of the week.

If I have a good week and feel confident about where I am in terms of my writing, I sometimes take Fridays off, and that’s when I’ll do out-of-the-house errands and other domestic stuff that I’ve been avoiding. I try not to work on the weekends, ever. I find that I function best when I’m excited to get back to the writing. If you force yourself to the desk when you’re not feeling it, creative writing feels like a slog. Listen, it can’t feel magical every day, of course, but writing does have the potential to be an act of joy.

4. What was the most unexpected thing about the publication process?
Well, I suppose the most unexpected thing is how different every book publication feels. There really isn’t a magic formula. You can have a book that “got all the things” in terms of media, and it still doesn’t sell for some reason; or you can have a sleeper book that suddenly becomes a cult hit. This is a generalization, but I do feel that many publishers still believe in the existence of that “magic formula.” Maybe the formula existed at some point, but today, with three novels behind me and a nonfiction book on the way, I’ve come to believe that your book’s fate is actually in the hand of readers. There has to be something about your book that makes people want to disappear inside the story. You can’t manufacture that kind of alchemy. It’s out of your control. This can be hard for writers to accept.

5. What are you reading right now?
I’m currently reading a galley of Cameron Dezen Hammon’s This Is My Body. I’m trying to work on an experimental memoir about female desire and reproductive psychology, so I’m finding Cameron’s memoir about her various religious and romantic obsessions really interesting to read. The idea of religious faith—of having it versus not having it—is much on my mind as my five-year-old starts to ask me big questions about life and death and purpose and all that. I grew up without a religion and I often question if I am doing a disservice to my daughter by not presenting her with some religious options. Can this be outsourced? Is there like a religion catering service that will come to your house and present a smorgasbord of all the different options? A religious tasting flight of sorts? Hit me up if there is, I’d like to know about it.

6. Who do you trust to be the first reader of your work?
Myself? (I’m laughing here.) For better or for worse, I’m not the writer who has a circle of trusted writer friends who I workshop new writing with. I didn’t go through an MFA program, and I’ve lived for well over a decade in a really rural area, so I think that I’d been DIY-ing the writing thing for so long, when I finally did grow a writing community that I trusted—and still trust—I’d come to rely so heavily on myself that I just kept doing it. This being said, I think I’m a good reader of my own work. I’m very savage with myself in terms of edits. So I’m my own first reader. When I feel ready for outside criticism and feedback, the manuscript goes to my agent and my husband at the same time.

7. If you could go back in time and talk to the earlier you, before you started writing Costalegre, what would you say?
Oh, that “me” wouldn’t have listened to anything that the “hindsight” me would have to say! Pre-Costalegre me was hell-bent on writing Costalegre, in secret, in a very specific way. I just would have brought that version of me some water and a bowl of mixed nuts and let her do her thing.

8. What is the biggest impediment to your writing life?
I find it really challenging—especially now that I am a mother—to toggle between the feral, creative, striving version of myself and the version that has to set a behavioral example for my daughter, plan for the meals that we’ll be eating and all that. It’s not just the parenthood thing, though. I’m a very hard worker. I love to work intensely. Left to my own devices, I would hole up in my house and write for five days straight and live on Miso soup and cheese. But my husband is very French, very civilized. He works from home as well and wants me to eat lunch with him and for us both to chat about our days. I find that incredibly difficult to do on work days. This pushing and pulling. I don’t want to “chat,” I want to be alone with the narrative problems in my head and a soft-boiled egg and the work. That’s just on work days though. I’m less of a wildebeest on the weekends.

9. What is one thing you might change about the writing community or publishing industry?
Well, I have an entire book coming out on this topic called Before and After the Book Deal: A writer’s guide to finishing, publishing, promoting and surviving your first book so “longer letter later” as we used to say. For starters though, I think that publishers should provide their authors with some version of health insurance and compensation for talk therapy.

10. What’s the best piece of writing advice you’ve ever heard?
“If you have a cliché in your writing, put a funny hat on it and make it dance around.” Alexander Chee said that in a writers workshop that I took with him a long while ago. I’ve never let it go.