This week’s installment of Ten Questions features Helen Phillips, whose novel The Need is out today from Simon & Schuster. The Need is an existential thriller about Molly, a scientist and mother of two young children. When a masked intruder appears in her home and demonstrates an eerie familiarity with the inner workings of her life, Molly falls down a mind-bending rabbit hole. A paleobotanist who has recently uncovered an array of peculiar artifacts at her fossil quarry, Molly eventually learns the true identity of the intruder, forcing her to confront an almost impossible moral decision with far-reaching repercussions for her children. Helen Phillips is the author of the story collections Some Possible Solutions (Henry Holt, 2016), which received the 2017 John Gardner Fiction Book Award, and And Yet They Were Happy (Leapfrog Press, 2011); the novel The Beautiful Bureaucrat (Henry Holt, 2015), a finalist for the New York Public Library’s Young Lions Award and the Los Angeles Times Book Prize; and the children’s adventure book Here Where the Sunbeams Are Green (Delacorte Press, 2012). A graduate of Yale and the Brooklyn College MFA program, she is an associate professor at Brooklyn College. Born and raised in Colorado, she lives in Brooklyn with her husband, artist Adam Douglas Thompson, and their children. 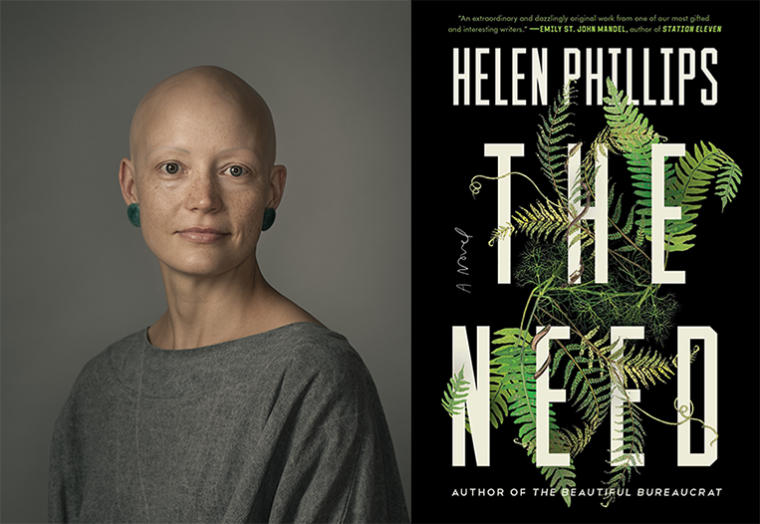 Helen Phillips, author of The Need.

1. How long did it take you to write The Need?
I began the long, chaotic document of notes that would grow into The Need in February of 2015, and I handed the final draft in to my editor in September of 2018. But the urgency to write a book about motherhood arose in me in the summer of 2012, when my daughter was born and my sister died, though it took me some years to approach the material.

3. Where, when, and how often do you write?
During the semester, when I’m teaching at Brooklyn College, I typically write one hour a day, five days a week, sometimes in my shared office on campus and sometimes at home. I put on a timer and protect that hour. The moment the timer rings, I’m off to teach or to prepare for class.

4. What was the most unexpected thing about the publication process?
Simon & Schuster sent me on a pre-publication tour to meet with independent booksellers at Winter Institute in Albuquerque, and in Seattle, the Bay Area, Boston, and New York. It was fascinating to meet indie booksellers from across the country. For one thing, indie booksellers are (unsurprisingly) a very smart, funny, and thoughtful group. And I was surprised and excited by the positivity they seem to feel about the industry overall—they are selling a good number of books, hosting a lot of events, playing a central role in their communities.

5. What are you reading right now?
I recently finished Mira Jacob’s Good Talk and Ben Lerner’s The Topeka School, both of which I loved. I’m currently reading Darcey Steinke’s riveting Flash Count Diary. Next up is Rumaan Alam’s That Kind of Mother. And my book tour reads will include Valeria Luiselli’s Lost Children Archive, Esmé Weijun Wang’s The Collected Schizophrenias, and Ocean Vuong’s On Earth We’re Briefly Gorgeous.

6. Which author, in your opinion, deserves wider recognition?
The Swedish writer Karin Tidbeck, whose novel Amatka is an exquisitely written evocation of a dystopian society where everything that isn’t properly labeled with a name-tag turns to sludge. One of my favorite books in recent years.

7. If you could go back in time and talk to the earlier you, before you started writing The Need, what would you say?
Don’t be scared of the tension and grief that has to be present in this book.

8. What has changed about your writing process over the years, since writing your first book?
When I wrote my first published book, And Yet They Were Happy, as well as three other long-since-thrown-away novels before it, I had a lot more time to write. I had an administrative job and was teaching night classes, but still I could fit in three to four hours of writing time before going to work. When I became a mother, my daily writing time shifted from four hours per day to one hour per day. But it’s a quality-over-quantity thing, or so I tell myself; now I shove the energy of four hours into my single hour.

10. What’s the best piece of writing advice you’ve ever heard?
I always go to Samuel Beckett’s “Fail again. Fail better.” And, Toni Morrison’s “A failure is just information.” Lately I’ve been thinking a lot about Isak Dinesen’s “I write a little every day, without hope, without despair.”

“Don’t be careful; definitely not in the first draft.” —Chanelle Benz, author of The Gone Dead