This week’s installment of Ten Questions features Sarah Elaine Smith, whose novel, Marilou Is Everywhere, is out today from Riverhead Books. Cindy, the fourteen-year-old narrator of Smith’s debut novel, lives alone with her two older brothers in rural Pennsylvania, deprived of adult supervision and a consistent source of healthy food. “[M]y brothers and I had turned basically feral since our mother had gone off for a number of months and we were living free, according to our own ideas and customs,” she says. When her living situation becomes untenable, Cindy escapes her own family’s poverty by assuming the identity of Jude Vanderjohn, a glamorous teen who has gone missing from an affluent, cultured home. Author Julie Buntin calls Marilou Is Everywhere “a haunting novel about craving escape so badly you’re willing to erase yourself.” Sarah Elaine Smith holds an MFA in fiction from the Iowa Writers’ Workshop and an MFA in poetry from the Michener Center for Writers at the University of Texas in Austin. 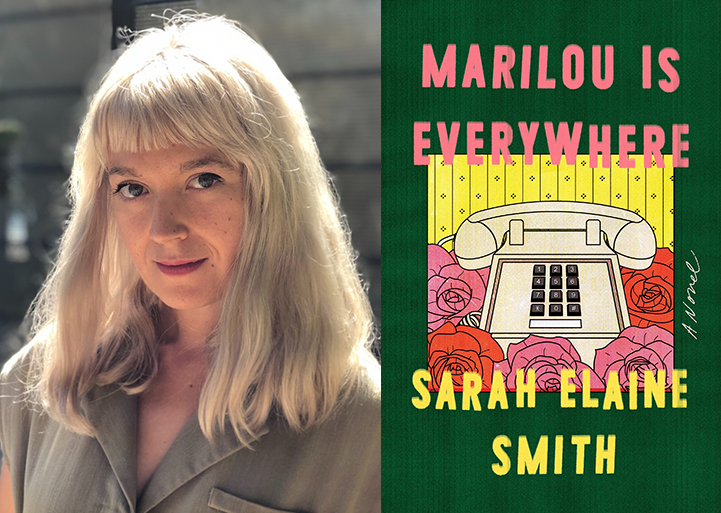 Sarah Elaine Smith, author of the novel Marilou Is Everywhere.

1. How long did it take you to write Marilou Is Everywhere?
About three years. I wrote each draft over three months, then let it sit unwatched for three months. I don’t know why, but that cycle and length of time made sense to me.

2. What was the most challenging thing about writing the book?
It took me forever to find an ending that felt true to the characters. I wanted desperately to write a sexier ending, and by “sexier” I mean more bleak. I wanted to punish Cindy for what she did, and my trusted readers very rightly reflected that it seemed a little harsh, some of the places where I had her ending up. It was humbling to surrender my own idea of myself as a merciless artiste and write that most gauche of all things, a happy ending. Which is not to say that the ending is without some bleakness, some consequences.

3. Where, when, and how often do you write?
Usually I write fiction at home because the refreshments are cheap—and also because I can’t shake some performative posture when I’m writing my made-up people in a public place. I will go out to get other kinds of work done—e-mails, essays, lesson plans—because it helpfully breaks up my day. I’m a full-time writer, so I could easily go an entire day without speaking a single word to another human. My cat, Nellie Belle, on the other hand, does hear frequent words from me. I try to engineer grocery trips and errands and coffee dates so I don’t get too cooped up and wild-eyed. I typically write every day and I try to do it as early in the morning as possible, because everything I do after that feels like it’s just fun.

4. Who is your most trusted reader of your work and why?
My future self, I’m afraid. There are a lot of brilliant readers in my life, but I usually take their feedback as a mirror of what’s currently on the page rather than a set of directives I should follow to improve the book.

My current self, however, is a really terrible and mean reader of my work, and I don’t trust her at all. She usually throws all the worst critiques at me while I’m working on something new. She would be really happy if I never wrote anything again, unless it emerged pure and perfect on the first try. My future self on the other hand, is usually delighted by the hidden energy and animus in whatever I wrote before.

5. What are you reading right now?
I’ve been diving back into Larry Levis, one of my absolute favorite poets, someone whose work I’ve had in my ear for a long time. I love that he uses plain language to get at the wildly mobile emptiness of the world, all the ways he describes that silence. I’m someone who has always seen a great deal of emptiness inside the ordinary, and I don’t mean that as a dramatic emotional statement, or not merely as a dramatic emotional statement, anyway. But when he writes, “There are two worlds,” I know exactly. It feels like home to me. And I think there’s also a tremendous comedy that rides alongside that emptiness, like the line “I still had two friends, but they were trees.” I take great comfort in his work. It feels like comfort to me, to recognize myself in how someone else sees the world.

6. Which author, in your opinion, deserves wider recognition?
Well, Larry Levis for one! Although he’s no secret among poets, but very few poets are secrets among poets anyway.

The fact that there are no movies based on Octavia Butler’s work is a shock to me.

7. If you could go back in time and talk to the earlier you, before you started Marilou Is Everywhere, what would you say?
I would say: I love you, babe. You’re going to have to be a different person to write the end of this book, but that’s a good thing. Whenever one thing doesn’t work out, it’s only because something better is going to take its place.

8. Would you recommend writers pursue an MFA?
Why not? But only if it doesn’t cost money or incur debt. Debt is the last thing writers need, and the least helpful aid to actual real-life writing. And to me, that should be the goal of getting an MFA: to find your way into a life of writing, not just a job or book contract. I found my time at MFA programs to be intense, fun, and instructive in lots of noncurricular ways. It’s popular to bash them as style factories where your edges get sanded down, but it’s been my experience that any group of readers, whether in a formal setting or not, will collectively steer you toward the expected. I think it’s important to keep your own heart’s guidance at the front, no matter who’s reading your stuff.

In truth, I think MFAs are effective because they put you in the orbit of people who do what you want to do. You see people who were like you in some way finishing their books, selling their books, and it makes it feel a little more possible that you can do it too. Not to knock any of the other amazing things, like genius peers—who make stellar friends, too—or brilliant teachers, and not to obscure the tremendous privilege that comes with being in a program where agents visit and actually want to read your work. Those things are real, absolutely. But I mention the mirror effect because I don’t hear people talk about it as often, and because it’s not exclusive to MFAs. Anyone can find writers who come from where they come from, or lived some of the same experiences, and those examples have expanded me at least as much as anything I’ve learned in a classroom.

9. What is the biggest impediment to your writing life?
Self-doubt, shitty little rules I’ve made up for myself, jealousy, ego. I don’t want to even claim those qualities as part of myself, but it’s true. To cope with those things, I’ve made up a lot of tricks for myself. For example: I think about the ways that Procter & Gamble or whatever makes money off my self-doubt. That usually shifts my determination. Nobody benefits from my fear except the people who want to sell me Lean Pockets and compulsory femininity—and fuck those people. They’re not going to get that dollar, not today!

10. What’s the best piece of writing advice you’ve ever heard?
I’ve got two. From Terrance Hayes, in an interview from jubilat, I think, paraphrased: If you’re blocked, it just means that there’s some invisible rule you’re afraid of breaking. So figure out what the rule is, and break it.

And from the playwright Sherry Kramer, paraphrased yet again, because this came from cocktail party chatter, if you can believe it. But it goes something like: People always want to write something strange or surprising, and they think they have to go somewhere out there to find it. But nothing is stranger than the moment you’re in. If you begin in this moment and tell what’s happening with all the clarity you can, it will be stranger than anything you can imagine.