This week’s installment of Ten Questions features Jana Prikryl, whose poetry collection No Matter is out today from Tim Duggan Books. Called “one of the most original voices of her generation” by critic James Wood, Prikryl follows up her acclaimed debut, The After Party (Tim Duggan Books, 2016), with a collection of sonnets, free verse, and invented forms rooted in themes of loss, self-reliance, and redemption, pivoting from love poems to elegies for a fraught culture worth saving. Born in Czechoslovakia, Prikryl fled to Austria with her family when she was five; a year later she moved to Canada and, in 2016, a few months before the presidential election, she became a U.S. citizen. Prikryl’s poems have appeared in the New Yorker, the London Review of Books, the Paris Review, and the New York Review of Books, where she is a senior editor and the poetry editor. 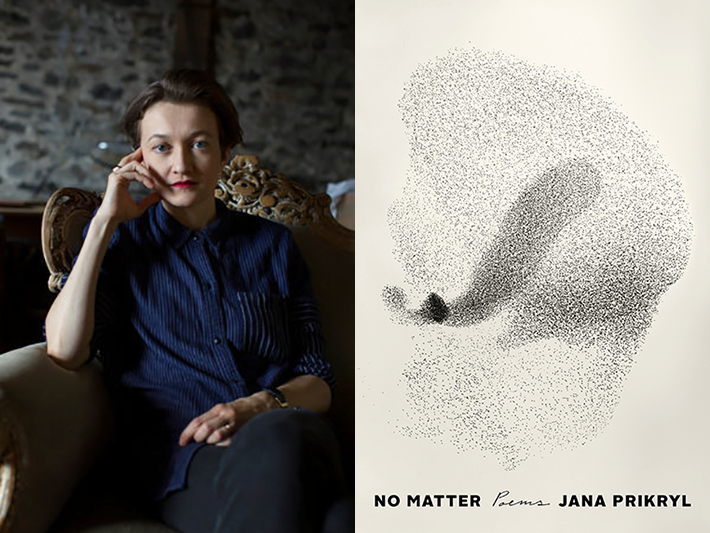 Jana Prikryl, author of No Matter.

1. How long did it take you to write the poems in No Matter?
Nine months, plus a few years—nine months was the length of my fellowship at the Radcliffe Institute for Advanced Study at Harvard, where I had an amazing five days a week to write in 2017 and 2018. That’s where most of the book was written. But I’d started a number of the poems in 2015, as soon as I’d handed in The After Party, my first book. And a couple are slightly revised from things I rediscovered in decades-old notebooks. And I kept writing, at a trickle, for a few months after I returned to New York last summer.

2. What was the most challenging thing about writing the book?
Tolerating myself on the page during my first few months at Radcliffe. I’d never before had such a stretch of time for writing, and it was a tremendous gift that produced the intensity and cohesion of the book, but it was agony to be thrust into daily contact with my first drafts. I had to plow through them to reach the lines that felt charged in some way, and develop those. That started to happen about a third of the way through the fellowship, and then things got interesting. But the first few months my spouse had to put up with much groaning when I came home from “the office” every night.

3. Where, when, and how often do you write?
Anywhere, when some unexpected words occur to me, if I can. I work full-time as an editor, and my son is a toddler, and my husband is an artist who takes care of our boy much of the week, so on weekends I am parenting while my husband works. Some days I can focus on the subway, during my commute, and tap things into my phone.

4. Who is your most trusted reader of your work and why?
I don’t exactly have one—it depends on what I’ve written and what I fear its weaknesses are. My spouse, Colin Gee, is a performing artist and a very sensitive and voracious reader, and if something is just not true he will hear it. My oldest friend, Jé Wilson, is a fiction writer who knows everything about me, has read everything ever written, and delivers very sound judgments. I have a handful of good friends who are brilliant and sophisticated readers too, and sometimes I send things to one of them. But I also feel that no one can really help me with poems, as opposed to essays. Each one is like a trial I get to undergo alone.

5. What are you reading right now?
Rachel Cusk’s A Life’s Work, Ivone Margulies’s Nothing Happens: Chantal Akerman’s Hyperrealist Everyday, and Robert Bresson’s Notes on the Cinematograph, among other things.

7. If you could go back in time and talk to the earlier you, before you started the first poems in No Matter, what would you say?
I am tempted to reply: Don’t worry so much about how dark and angry the book is becoming. But crucial to writing the book was the panic I started feeling about halfway through because of its darkness and anger—I wouldn’t want to have avoided reckoning with the book’s tone or meaning. In fact, if I could go back I’d tell myself to get to the gym every day, take advantage of the ridiculously convenient Harvard pool—I’m a swimmer—while you have the chance. Live a little. But then, I wouldn’t have wanted to live more and write less, etc.

8. How do you balance your day job with your writing?
I don’t think I do at the moment! Before I had a child I tried to devote evenings and weekends to writing, but it was always a stretch to write on weeknights. I work best in the mornings and I find it much easier to get started if I know I have all day to noodle around.

9. What is the biggest impediment to your writing life?
Some depressing joint custody between my full-time job and the lack of subsidized childcare in this country. I’m lucky to have an intellectually stimulating job that I care about. But writing something good demands time, just sitting with it and staring and rewriting, and this kind of time is a luxury most working parents do not have.