This week’s installment of Ten Questions features Jana Larson, whose first book, Reel Bay, is out today from Coffee House Press. Nearly two decades ago, writer and filmmaker Jana Larson was riveted by a short news item in a Minneapolis newspaper, which reported the apparent suicide of a young woman, Takako Konishi, who was visiting from Japan. The police, who had by chance interviewed Konishi a few days earlier—though greatly inhibited by a language barrier—speculated she had come to the Midwest in search of the money hidden in a snowdrift in the movie Fargo. Captivated by the strangeness of the report, and an image that flashed in her mind of the young woman wandering in a great expanse of white, Larson began to research the case further. Written as a hybrid screenplay-essay, Reel Bay documents the author’s obsession with Konishi’s story and her various attempts to transform the story into art. What begins as an exploration into another woman’s struggle becomes a broader reckoning with the author’s own creative and emotional lives. “Reel Bay is an obsessive, fascinating, haunting debut,” writes Dana Spiotta. Jana Larson holds an MFA in creative nonfiction writing from Hamline University and an MFA in filmmaking from the University of California in San Diego. As a filmmaker, she has received honors from the Princess Grace Foundation and the Minnesota State Arts Board. She lives in Minneapolis. 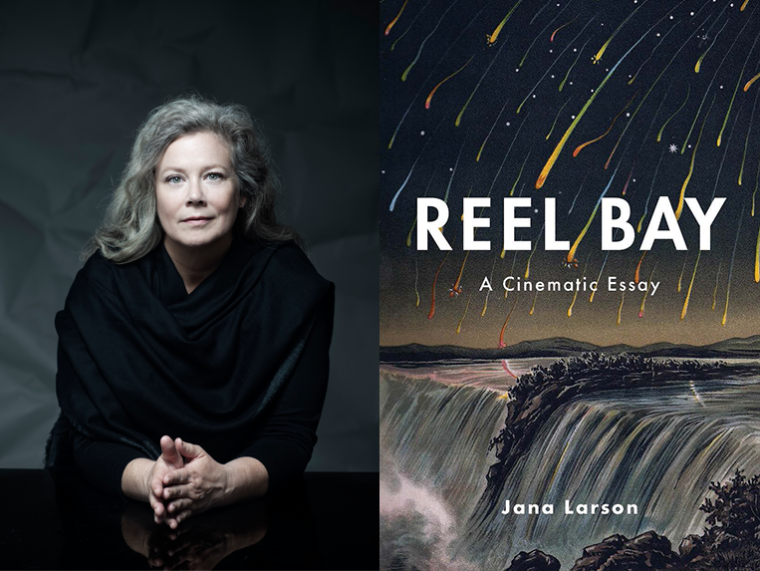 1. How long did it take you to write Reel Bay?
Too long. My friends and family had, for the most part, stopped asking me how I was doing because it had become painful for them to hear about the book. My mother would occasionally scream, “When are you going to be finished with this thing so you can move on with your life?” I worked on the project off and on for about seventeen years, first as a documentary film, then as a screenplay, and finally as a book. If I were to add up all of the time I was actively working on the project, it was probably ten years. I now console myself by thinking that might be fairly typical for a first book.

2. What was the most challenging thing about writing the book?
Grappling with my own mind. Admitting to myself that I was as much a part of the story as Takako; that my own delusions rivaled hers. Then finding a structure to tell that story—about a long quest that occurred in the minds of two different women, that took them across continents at different times. Only one of them survived.

3. Where, when, and how often do you write?
When I’m actively working on something, I try to write every morning for an hour or two. If I don’t do that, the continuity and momentum of my thought process breaks apart and it takes me a long time to get back to it. I need to be alone at a table near a window because I need natural light. Sitting in a chair under a tree is also good. I am very particular about the pen and notebook I use. Later I go back and highlight or underline whatever interests me in the notebook and then work to cobble those lines and paragraphs together into a longer piece.

4. What are you reading right now?
I’m about halfway through Antkind by Charlie Kaufman. I’m also reading A Collapse of Horses by Brian Evenson and In Search of Lost Time by Marcel Proust. Next up are Ornamental by Juan Cárdenas, The Waves by Virginia Woolf, and Suite for Barbara Loden by Nathalie Léger.

5. Which author, in your opinion, deserves wider recognition?
Probably all of them. It seems like reading isn’t a very popular pastime right now. But I feel comfortable in the more obscure corners of the artistic world. I grew up going to punk rock shows in tiny clubs and dilapidated warehouses. Mostly the bands couldn’t play their instruments very well, but there was something amazing about the energy that came from being part of something that felt totally uncommercial and sometimes a little dangerous. That probably gets lost when people in board rooms get involved and start fretting over how much money they’re investing and what kind of return they need to get. Maybe it’s great to have that kind of validation; I wouldn’t know about that. But to answer the question more directly: Julio Cortázar. I love his stories so much I want to climb inside of them. I love Lydia Davis’s stories too, but I’m already living inside of a Lydia Davis story.

6. What is the biggest impediment to your writing life?
Self-doubt.

7. Would you recommend writers pursue an MFA?
During my first year of graduate school, one of the professors said to me, “Run while you still can! People arrive here with talent and leave with none.” I thought he was kidding, but he absolutely wasn’t. The wrong MFA program can be very damaging and confusing. Still, I think that if a person has a project they’re working on and they want structure—deadlines and critiques and a practice community—to help them finish it, then perhaps graduate school is a good fit. To those people, my advice is: Get absolutely clear about what supports your creative process and what undermines it; steer toward the former and treat the latter like kryptonite.

8. If you could go back in time and talk to the earlier you, before you started Reel Bay, what would you say?
I don’t think you can give someone insight; they have to struggle to find it on their own. But I remember one of my professors in graduate school telling me that Jonas Mekas, patron saint of lyric and experimental cinema, encouraged artists to buy real estate in New York. He understood that the existence of an art scene depends on artists having affordable spaces to live and work. So I would say, “Buy property in San Diego while it’s still possible.”

9. What, if anything, will you miss most about working on the book?
Sometimes I can’t imagine myself without this book, and without Takako. Of course, she’s mostly a figment of my imagination; she’s continued on for so long as my companion because of all that I’ve projected onto her. And I don’t have that anymore. I have to let it go. It’s like any intimate relationship, really.

10. What’s the best piece of writing advice you’ve ever heard?
Patricia Weaver Francisco, after watching me struggle with this book for many years, said, “You need to just choose an island and swim to it.”