Over the course of two and a half years, nearly one hundred and fifty writers have answered Ten Questions from Poets & Writers Magazine, generating an index of almost 1,500 responses for readers to peruse. The interview has evolved since the first installment in June 2018—questions have cycled in and out—but the last question has remained: What’s the best piece of writing advice you’ve ever heard? As we approach the end of 2020, our editors have selected ten of their favorite answers to this question, responses that we hope might renew your creative spirit after this unusual and difficult year. 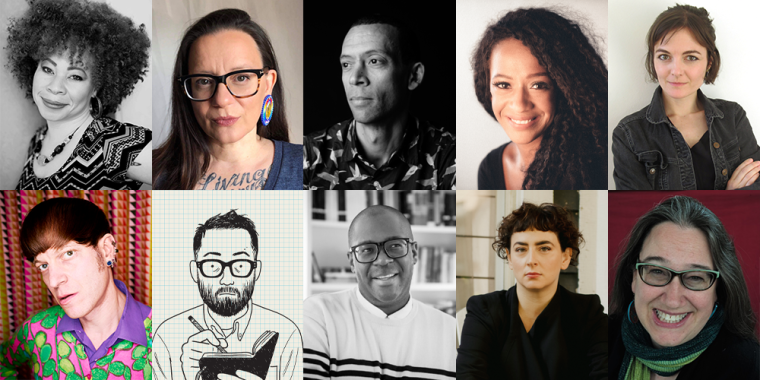 “Everything you’re most afraid of is what you need to write.” —Mattilda Bernstein Sycamore, author of The Freezer Door

“It sounds a little nutty coming from someone who’s been teaching writing for more than a decade, but I’m mistrustful of writing advice in general—which relates to my irritation that writers are now expected to be sages. But I have noticed that the writers who are willing to revise their work substantially are eventually able to get their work to do what they want it to, and to find someone willing to publish it.” —Kate Zambreno, author of Drifts

“My friend, the incredible and generous poet, Willie Perdomo, once told me to work on my writing in pieces, breaking it down, and do a bit each day. I needed his wisdom. Because I can get overwhelmed. Left to my anxiety, I’ll ambush myself before I even begin because I think I have to know the entire life of a story and that it must be a single breath. But that’s not how we breathe.” —Rachel Eliza Griffiths, author of Seeing the Body

“It might not be the best I’ve ever heard, and it certainly isn’t the most appropriate for this moment in time, but the advice I most often need to hear is: You’ve got to get out. Take a walk. At the very least, these days, leave the screen and stand by a window. So much work can happen while you’re not working. I think this is instinctive for some people, but I always have to remind myself; otherwise I end up stuck and hunched and ripping everything in half.” —Natascha Bruce, translator of Lake Like a Mirror

“Alexander Chee once said something like, When you put something that actually happened to you in a story, you have to privilege the needs of the story and not merely what happened. I don’t remember the exact quote, but I think about that all the time.” —Brandon Taylor, author of Real Life

“Indigenous Canadian writer and Elder Lee Maracle once told me, ‘Don’t throw anything away. There’s a reason you wrote it in the first place, even if it doesn’t belong in the piece you’re drafting.’ I keep a folder on my laptop with snippets that have to be cut. After editing one of my novels, I ended up using the pieces in the folder to finish a volume of short stories.” —Cherie Dimaline, author of Empire of Wild

“My best piece of writing advice came from the poet-scholar Chiyuma Elliott at a Cave Canem workshop back in 2009. I was a baby poet who loved grand finales for my poems, and in her feedback, she said very gently, ‘At the end of a poem, leave the door open.’ I’ve spent every day of my writing life since learning all the ways you can leave a door open: unlocked, cracked, off the hinges. There are so many ways.” —Destiny O. Birdsong, author of Negotiations

“I’ve been terrible at everything I’ve ever wanted to be good at—dating, tying my shoelaces, athletics, writing, driving, math, drawing, fashion, parenting—the first time I tried it. But years ago, my father, who’s a musician and public school teacher, told me about how much better his music had gotten when he’d just made it a point to commit to doing it—with focus and intention—on a daily basis. Even when it’s terrible. Especially when it’s terrible. Intentional, focused practice: That’s it. Maybe some people are phenomenal enough to not need it, but for me there’s no shortcut. Not for anything.” —Kawai Strong Washburn, author of Sharks in the Time of Saviors

“‘Ah, go on. You’re living your life’—said to me by Grace Paley when I was not writing every day.” —Heid E. Erdrich, author of Little Big Bully

“My friend Richard Sala had two catchphrases/mantras: ‘I can’t win’ and ‘It never ends.’ Taken together, they seem like the perfect summation of creative struggle.” —Adrian Tomine, author of The Loneliness of the Long-Distance Cartoonist

Ten author readings that reflect the beauty, hope, resilience, and strength of writers to confront the failures of the past and to rejoice in the promise of what lies ahead.

Leah Hampton’s F*ckface: And Other Stories, Megha Majumdar’s A Burning, Marie-Helene Bertino’s Parakeet, Karen Tei Yamashita’s Sansei and Sensibility, and C Pam Zhang’s How Much of These Hills Is Gold...