This week’s installment of Ten Questions features Yxta Maya Murray, whose latest novel, Art Is Everything, will be published in January by TriQuarterly Books. In Art Is Everything, Chicana performance artist Amanda Ruiz navigates critical points in both her art practice and personal life. She has a residency lined up at the Guggenheim, among other honors, but frets over becoming compromised by institutions. She’s madly in love with an actuary named Xōchitl Hérnandez, but Xōchitl has recently announced she wants a child—and Amanda worries a baby would disrupt her most ambitious projects. Then a death and an incident of violence shake her further. Shifting in form from critical essay to Wikipedia post to Snapchat message, Art Is Everything is a whip-smart and intimate portrait of ambition and survival, love and loss in the contemporary age. “In Amanda Ruiz, Yxta Maya Murray has created a character that is fresh and sassy and unlike any I’ve encountered in recent fiction,” writes Alex Espinoza. Yxta Maya Murray is a writer and law professor living in Los Angeles. She is the author of several previous novels, including The Queen Jade and The King’s Gold. Her writing has also appeared in the Georgia Review, the Los Angeles Review of Books, Ploughshares, and the Southern Review, among other publications. 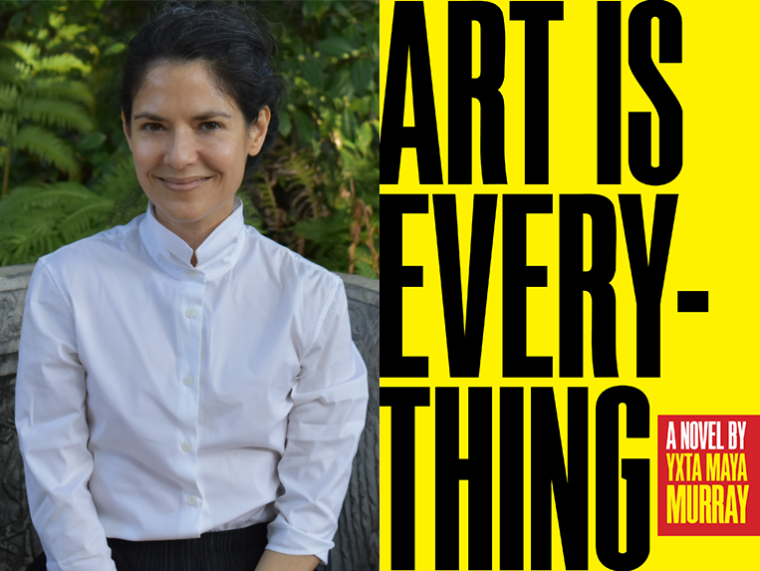 1. How long did it take you to write Art Is Everything?
Two and a half years. I’d stopped writing fiction for about eight years, but I had a big surgery in 2015, and in the aftermath I began furiously banging out passages on art, ambition, longing, and survival that wound up becoming the novel.

2. What was the most challenging thing about writing the book?
It wasn’t challenging. I leapt into it and wrote it like a banshee. Not all projects come to me as ferociously though.

3. Where, when, and how often do you write?
I write in my bed because I blew my neck out editing my fourth novel at my work desk and had to run around with a padded neck brace for two months. Now I flounder amongst the pillows and bash away at it, so to speak. I write in the morning after running, if I can. I try to do it every workday. I used to write through the weekends but then found that wasn’t good for my relationship. “I can’t! I’m writing!” Ugh.

4. What are you reading right now?
I just finished Yukio Mishima’s The Temple of the Golden Pavilion, which is about a guy who wants to burn down the most beautiful thing in the world. The last line is so, so boss: “I wanted to live.” I’m also careening through Iris Murdoch’s An Accidental Man—I can’t get enough of her Oxford drama and all of the philosophical sex. Camilo José Cela’s great experimental novel about the Spanish Civil War, San Camilo, 1936, recently almost broke my mind, but I coped by reading only ten pages every morning and then journaling about it. It’s got to be a precursor to Roberto Bolaño’s 2666, one of my favorite novels even though I still don’t know if it’s a feminist revolution or snuff porn. The misogyny in San Camilo, 1936 is bionic. Another good ending though.

5. Which author, in your opinion, deserves wider recognition?
Carribean Fragoza’s writing is passionate and precise. Her gorgeously goth book of short fiction, Eat the Mouth That Feeds You, is coming out from City Lights Publishers in March. Maceo Montoya’s Preparatory Notes for Future Masterpieces is an electric bildungsroman that University of Nevada Press will publish in April. Anaïs Duplan’s Blackspace: On the Poetics of an Afrofuture just came out from Black Ocean Press. Duplan writes about aesthetic strategies that can help create liberation and chronicles his own gender transition journey. “I have discovered that when I experience what is universal in me, I may leave my individual oppressions behind,” Duplan writes. Essential and irresistible.

6. What is the biggest impediment to your writing life?
Death.

7. What is one thing that surprised you during the writing of Art Is Everything?
I dash about the world thinking that I’m relatable, low-key, and have a totally accessible emotional style, but in the writing of the novel I learned that I just might be the human equivalent of habanero chilies or Vegemite.

8. What, if anything, will you miss most about working on the book?
My protagonist, Amanda Ruiz. She wears slashed Reagan/Bush campaign jerseys as couture and can make awesome art out of Styrofoam and tears.

9. Who is your most trusted reader of your work and why?
This is a hard question for me. Virginia Barber used to be my agent, and she was a god. Rest in peace.

10. What’s the best piece of writing advice you’ve ever heard?
I started writing in 1995 during a federal clerkship for a district court judge in the Central District of Los Angeles. It was a lot of intimidating work, and I would try to write at night and on the weekends. I would cry at my computer like I was Kafka collapsing under his desk at the Workers’ Accident Institute for the Kingdom of Bohemia. But then I read a Michiko Kakutani New York Times review of some writing advice book I don’t remember the name of, and she relayed that the book said that you should just write a page a day. A page on my computer was twenty-six lines. I wrote a page a day come hell or high marital dudgeon and pushed out three books that way.