This week’s installment of Ten Questions features Francesca Ekwuyasi, whose debut novel, Butter Honey Pig Bread, was published yesterday by Arsenal Pulp Press. In Butter Honey Pig Bread, estranged twin sisters Taiye and Kehinde reunite in Lagos to visit their mother. As young children they had been inseparable, but a traumatic event created a fracture in the family that, left unexamined, expanded and festered over the years. Shifting between various time periods, the novel also tells the story of their mother, Kambirinachi, who had her own complex childhood. An intergenerational saga frequently enriched by the language of food, Butter Honey Pig Bread is a poignant tale of familial love and hardship. “Ekwuyasi’s sensuous prose, deft plotting, and keen insights into human nature combine to form a vision that feels like peering deep into the souls of a trio of dear friends,” writes Kai Cheng Thom. Francesca Ekwuyasi is a writer, artist, and filmmaker born in Lagos. Her writing has appeared in numerous publications, including Brittle Paper, GUTS, Transition, Visual Art News, Vol. 1 Brooklyn, Winter Tangerine Review, and the Malahat Review. Butter Honey Pig Bread was longlisted for the Scotiabank Giller Prize. 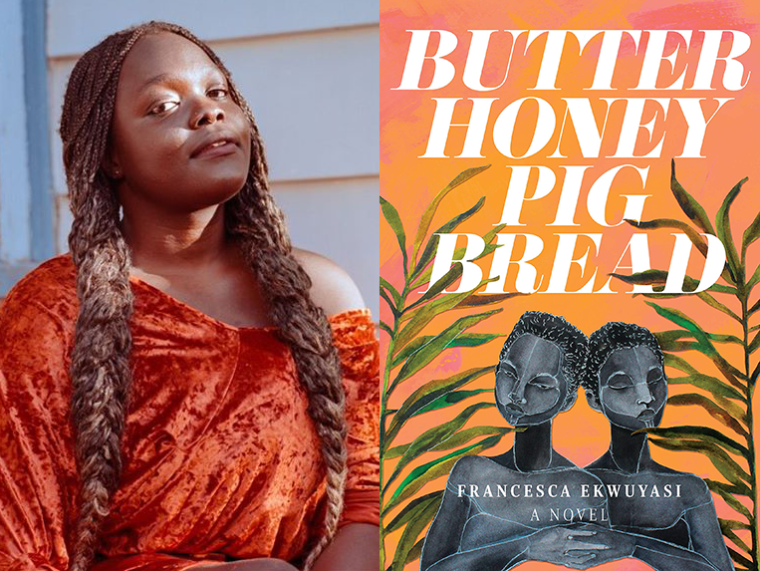 1. How long did it take you to write Butter Honey Pig Bread?
I started writing it in 2013 and worked on it on and off over six years.

3. Where, when, and how often do you write?
The answer to this has changed and is likely to continue changing frequently, ha! I write in my bedroom, in the studio, in the kitchen, on my work computer at either of my day jobs, in my journal, on my phone. Sometimes, during my more disciplined periods, I write as soon as I wake up. Other times I record voice memos of ideas, plot, or dialogue on my phone while I’m walking or running errands. Sometimes I write every day, other times only a few times a week. Like I mentioned earlier I’m really working on that discipline thing!

4. What are you reading right now?
Right now I’m reading a few things. I’ll list the last three I opened this week: The Book of Delights by Ross Gay, Luster by Raven Leilani, and In the Wake: On Blackness and Being by Christina Sharpe. I also thoroughly enjoy audio books—provided I dig the reader’s voice and cadence. I just started listening to The Midnight Library by Matt Haig.

5. Which author, in your opinion, deserves wider recognition?
Ooh this is a tricky question because my answers will be biased to my own tastes! I genuinely believe that any writer who is committed to their craft and doing the work with integrity deserves to be read by folks with whom their work resonates.

6. What is one thing that surprised you during the writing of Butter Honey Pig Bread?
I was surprised by how much agency my characters seemed to have; the imagination is wild and impressionable. I was also surprised by my commitment and passion for the story. I didn’t expect it to mean so much to me, but it does.

7. Outside of writing, what other forms of work were essential to the creation of the book?
Reading was crucial, as well as indulging in many other forms of art, music, fine art, and performance. Talking to friends and peers, working out dialogue and ideas with them. And other forms of research!

8. What is one thing you might change about the writing community or publishing industry?
I don’t believe I know enough about this to have opinions on what needs to change really. I think the writing community and publishing industry exist in the larger context of the world, which is rife with inequity and brutality, crumbling under the pressure of late-stage capitalism, the horrifying symptoms of climate change—you get the gist. Anything that I think needs to change within writing communities and the publishing industry is inextricable from that. For example, the stories that we write and reward are not apolitical, nothing is, but that doesn’t mean they have to be didactic. So perhaps that’s my answer.

9. Who is your most trusted reader of your work and why?
My friends and my editor!

10. What’s the best piece of writing advice you’ve ever heard?
“Read more than you write. In expressing the ambition to be a writer, you are committing yourself to the community of other writers.” A quote from Teju Cole I found via the Aerogramme Writers’ Studio.