This week’s installment of Ten Questions features Zeyn Joukhadar, whose second novel, The Thirty Names of Night, is out today from Atria Books. In The Thirty Names of Night, a young Syrian American trans boy seizes an opportunity to investigate the mystery of his mother’s death. Five years ago she died in a suspicious fire shortly after she came across an exceedingly rare bird nesting on an old tenement building in Manhattan she was trying to protect from demolition. Everyone doubted the discovery; most ornithologists simply did not believe the species existed. Even the narrator doubted his mother, until now, when he comes across a tattered journal belonging to a long-disappeared Syrian American artist named Laila Z, which also makes mention of the bird. With his mother’s ghost frequently by his side, the narrator seeks out answers about the mysterious species and, along the way, makes unexpected discoveries about his family history and the queer and trans histories of his community. Zeyn Joukhadar is also the author of The Map of Salt and Stars (Touchstone, 2018), which won the Middle East Book Award for Youth Literature. His writing has appeared in the Paris Review, Salon, Shondaland, PANK, and Mizna, among other publications. 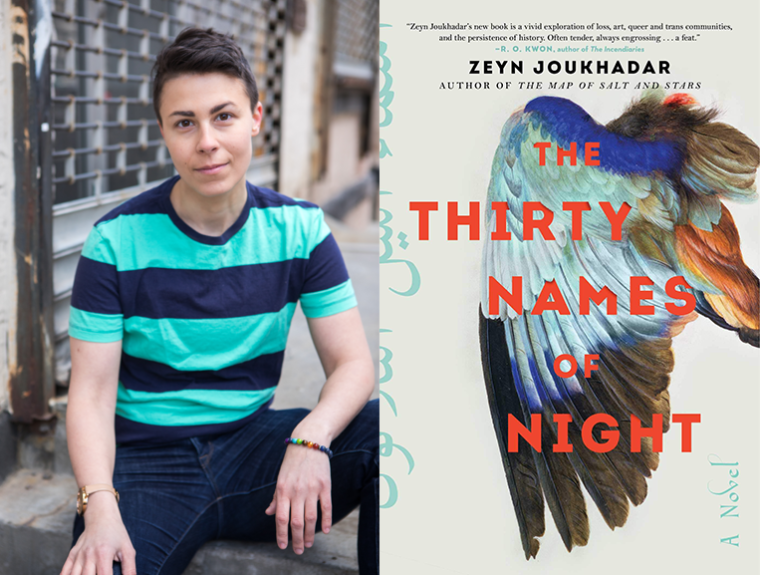 1. How long did it take you to write The Thirty Names of Night?
Three years.

2. What was the most challenging thing about writing the book?
Trying to put experiences that are inherently wordless—particularly around desire, embodiment, and existing outside of binary (cis) gender—into words. So much of who we are—and I use “we” here for all of us, including cis people—and how we experience the world and ourselves is touched by the language we have for gender. One of my main questions in the writing of Thirty Names was: When you exist outside of the cisgender binary and, by extension, live your life beyond that framework, how do you convey your experience of yourself? I think there are many answers to that question, some of which include visual art and the sacred. I explore both in the text. I wanted someone still in those early phases of self-discovery, when language is often fraught, to be able to recognize themselves.

3. Where, when, and how often do you write?
While I was writing Thirty Names I was nomadic, which for me meant that I moved every one to two months for over three years. Being on the move constantly meant that I had to be ready to write anywhere—on planes, on buses, at friends’ dining tables or spare-room desks, or on my laptop on someone’s sofa. Sometimes I’d jot down a scene using the notes function on my phone. I generally write every day for one project or another, and my best hours are often in the morning, though I’ll write at any time I can.

4. What are you reading right now?
We Want It All: An Anthology of Radical Trans Poetics, edited by Andrea Abi-Karam and Kay Gabriel.

5. Which author, in your opinion, deserves wider recognition?
Rickey Laurentiis, the author of Boy With Thorn, which won the 2014 Cave Canem Poetry Prize and the 2016 Levis Reading Prize.

6. What is the biggest impediment to your writing life?
The three years of housing instability I experienced following my transition made it extremely difficult not only to have the physical space to write, but also the emotional and mental space to focus on my work. The logistics of navigating life as a trans person of color re housing, documentation, immigration, lack of access to health care, and physical and virtual safety are ever-present impediments to my creative projects. I often think of the economic and logistical hurdles other trans creators of color in my life face, and all the incredible work that we’re losing as a result, and it makes me sad and angry at the high costs of cisheteropatriarchy, capitalism, imperialism, ableism, and racism. If we are invested in the kind of radically innovative art and literature of which we, as a society, most certainly have a desperate need, we have to better support queer and trans creators of color, especially Black trans women and transfeminine people, and we need to dismantle the systems designed to silence, incarcerate, and kill us. There is no other way.

7. What is one thing that your agent or editor told you during the process of publishing this book that stuck with you?
I remember my editor told me after reading one of the middle drafts of Thirty Names that she felt she understood something about the experience of being trans that she had never quite understood before. And what stuck with me was the fact that I had put into words a very specific experience of transness and of gender, maybe one of an infinite number of different experiences of transness, and it means something to me that both cis and trans people could identify with that experience and feel connected to it. There is no one single “trans novel” and there is no one single “trans experience,” just as there is no one single “gender experience.” Conceptions of and experiences with gender shape all of us, without exception.

8. Outside of writing, what other forms of work were essential to the creation of The Thirty Names of Night?
I’ve always drawn and painted—my father was a visual artist, so that was a big influence on me growing up—and I’ve always been particularly interested in nature art. During the writing process, I spent a lot of time drawing birds to explore the character of Laila Z. The team at Atria ended up turning one of my drawings—the yellow-crowned night heron—into a poster that we sent to early reviewers. It was wild seeing it on people’s Instagrams.

9. What, if anything, will you miss most about working on the book?
I really loved writing the historical scenes. In 2019, when I was an artist in residence at the Arab American National Museum, I spent hours listening to the oral histories of Arab autoworkers in Detroit. It was one of the most moving parts of the research process. I felt connected to all the Arab Americans who had come before me and all the different lives they’d led. Knowing that there were queer and trans people in every time and place is also comforting for me. We’ve survived so much, have loved each other through so much, and I wanted to do justice to that history in The Thirty Names of Night.

10. What’s the best piece of writing advice you’ve ever heard?
You have to become the person who can write the book you’re working on.

Correction: An earlier version of this article incorrectly stated that the protagonist of The Thirty Names of Night identified as a trans man. The narrator is trans and nonbinary.