This week’s installment of Ten Questions features Valzhyna Mort, whose latest poetry collection, Music for the Dead and Resurrected, is out today from Farrar, Straus & Giroux. Employing various poetic and musical forms, Mort searches for a genealogy in the labyrinthine history of Belarus. With the legacies of various catastrophes looming—from World War II to the Chernobyl fallout—she zooms in on private scenes that are at once gentle and violent. One poem, a lullaby, begins, “Snow glints and softens / a pig’s slaughter,” and throughout the collection there are many such striking contrasts. The cumulative effect is symphonic, generating a “music which, over accordion keys, / unclenches the fist of ancestry, / loosens fingers into rose petals.” Valzhyna Mort is also the author of Factory of Tears (Copper Canyon Press, 2008) and Collected Body (Copper Canyon Press, 2011). The recipient of fellowships from the Lannan Foundation and the Amy Clampitt Residency, her work has appeared in numerous publications, including Granta, Poetry, and the New Yorker. Born in Minsk, Belarus, she writes in English and Belarusian. 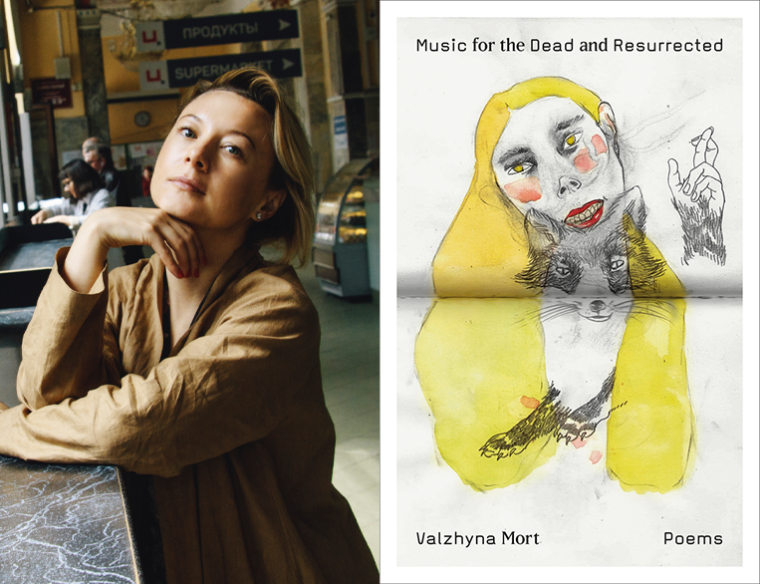 Valzhyna Mort, author of Music for the Dead and Resurrected. (Credit: Tanya Kapitonava)

1. How long did it take you to write Music for the Dead and Resurrected?
Ten years of writing—four of them, intensely. What’s impossible to count are the years of lived obsessions that explode into a book.

2. What was the most challenging thing about writing the book?
Knowing that, despite small victories of finishing poems, you are going to fail to capture that thing with words. That thing being the reason why you are writing in the first place.

4. What are you reading right now?
I got this wonderful anthology of contemporary Chinese poetry in the Russian translation, and I’m savoring it by reading two poems a night before bed. Also on my bedside is Moyshe Kulbak’s novel The Zelmenyaners, which I open at random and read a few paragraphs at a time like poetry. The Zelmenyaners reminds me where I’m from. I’m also reading From Moscow to the Black Sea, Teffi’s memoir of traveling through Russia and Ukraine after the 1917 Revolution. My former student’s book of poetry, The Understudy’s Handbook by Steven Leyva. More new poetry books: Guillotine by Eduardo C. Corral, Obit by Victoria Chang, In the Lateness of the World by Carolyn Forché, The Dyzgraphxst by Canisia Lubrin.

5. Which author, in your opinion, deserves wider recognition?
What is wider recognition, I wonder. Perhaps it’s when an author’s language becomes part of the cultural code? I come from a country where people do not read more than Americans do, but literature is a part of our cultural code. At the Belarusian protests against the authoritarian regime that is currently illegally holding onto power, you can see people holding posters with literary quotes, literary puns. There are books that are a part of everybody’s vocabulary. In the United States, even the “widely recognized” authors aren’t a part of a public vocabulary. Sports and TV shows are. As a result even a literary giant like Gwendolyn Brooks deserves wider recognition. Let’s try to connect to every American household right now and see how many of them have volumes of Emily Dickinson and Gwendolyn Brooks standing somewhere between a TV and a Crock-Pot. I don’t think that we’ll record any wide recognition.

6. What is the biggest impediment to your writing life?
People who don’t read poetry.

7. Would you recommend writers pursue an MFA?
Yes, but I don’t agree with this formulation. You pursue poetry, not an MFA. The goal of an MFA program is to provide you with mentorship, community, along with space, time, and money to grow, write, and think. It provides you with access to amazing libraries. It’s a utopia: two years of poetic self-care.

8. If you could go back in time and talk to the earlier you, before you started Music for the Dead and Resurrected, what would you say?
Take another ten years with it? It’s a good thing I cannot go back in time for this.

9. Who is your most trusted reader of your work and why?
A translator. Nobody else has a reason for a reading so obsessive, so slow, so attentive. There’s only one committed literary relationship: between poems and their translator, and trust is at its foundation, especially if the poet is not familiar with the target language. A real translator is not a traitor, but somebody who gives up their lung for your work.

10. What’s the best piece of writing advice you’ve ever heard?
James Baldwin’s “Talent is insignificant. I know a lot of talented ruins. Beyond talent lie all the usual words: discipline, love, luck, but most of all, endurance.”

Follow our cover subject, Belarusian poet Valzhyna Mort, on her recent trip to New York City. From a Ukranian diner in the East Village to a conference hall in midtown, Mort shares her poetry and talks about the language and people that inspire...
X