This week’s installment of Ten Questions features Destiny O. Birdsong, whose debut poetry collection, Negotiations, is out today from Tin House Books. In Negotiations, Birdsong pulls no punches. She exposes and writes against tokenization, fetishization, anti-Black violence, and liberal complacency. On voting, she writes, “we all take the sticker; we all / brag of our civic duty, gliding home / on a wave of solidarity that feels / like kinship.” In another poem, she throws back racist comments at a man: “I hope someone tells you / everything your culture made / is meaningless: Stonehenge, democracies, and you.” Each line in Negotiations is this fierce and truthful. Whether addressing sexual assault and illness, or self-love and community, Birdsong maintains this intense and intimate register. In one poem, the narrator addresses her child self, imagining if only she could tell her, “she was right / in her utter belief she could build a world / and live in it alone.” Negotiations is a whole world of its own, a revolutionary manifesto and love letter. “These poems are desire, survival, the body, rage, vulnerability,” writes Jaquira Díaz. “A fierce celebration of Black womanhood.” Destiny O. Birdsong is a Louisiana-born poet, fiction writer, and essayist. She is the recipient of fellowships from Cave Canem, Callaloo, Jack Jones Literary Arts, the Ragdale Foundation, and MacDowell. She lives in Nashville, Tennessee, where she earned both her MFA and PhD from Vanderbilt University. 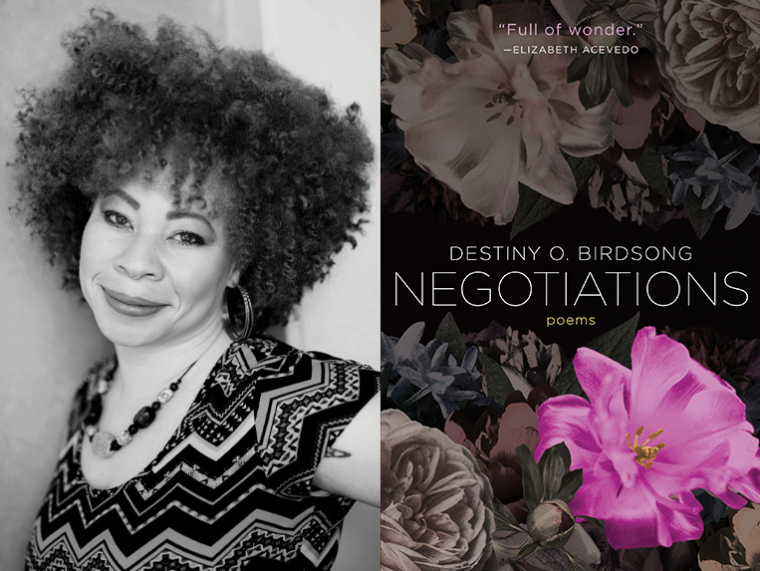 1. How long did it take you to write Negotiations?
Though some of the poems in the book date back to 2015, I started writing it in earnest in 2017, and it was a complete accident. That April I did my first 30/30 challenge—thirty poems in thirty days—in hopes of finishing another manuscript, but when I turned back to these poems during a residency later that year, I realized they were talking almost exclusively to each other, and doing something entirely different from the manuscript I’d intended to add them to. I wrote the last few poems to round out one of the middle sections in October 2019, after the book had been picked up. So in total, two and a half years. The other manuscript, which is more than a decade old, still isn’t finished.

2. What was the most challenging thing about writing the book?
The most challenging thing hasn’t happened yet, which is my mother, my family, and a few other folks who are close to me reading the book. There’s a lot in it they don’t know about me, and my biggest fear is causing them pain when they find out. I hope that’s not the case, but that would be incredibly difficult for me.

3. Where, when, and how often do you write?
I don’t write things for public consumption every day, but I do journal most days. I believe that it clears my brain for the writing I do later, whether it be the same day or the following year. Sometimes it offers me a phrase or idea, a concept for a poem, or space to map out revisions for an essay. My writing times depend on the genre: I tend to write poems in the middle of the night, 2 to 5 AM; fiction in midday, from 2 to 5 PM; and essays whenever I have a block of time to work on a draft. I write where I live because I have trouble concentrating when other people are in the room, so coffee shops have always been off-limits for me. If the subject matter is heavy, I write in bed—that’s my safe space. Otherwise I’ll write on the couch with the TV on but muted, so I have someone to look up at every now and then, but not be bothered by the noise. If it’s nice out, I journal on my patio.

4. What are you reading right now?
I just finished a collection of essays called Like Love by Michele Morano, and it was such a fascinating read. The book’s premise is about unconsummated romance in all its forms: with friends, complete strangers, parents, children. It confirmed much of what I’ve been feeling about my own friendships: There can be deep and sometimes even romantic love that just is and doesn’t have to try to be anything else—not sexual, not more platonic—and I can lean into it, flourish in it, give it back, and not feel weird or guilty for doing so.

5. Which author, in your opinion, deserves wider recognition?
Tara Betts. She really is a trailblazer for me when I think about the Black women who came before me, who write about what I write about, and who are still out here, doing all kinds of work, both on and off the page. Give her her flowers!

6. What is the biggest impediment to your writing life?
Right now? Money, which ultimately means time. I spend a lot of time—not to mention energy—doing stuff to pay my bills. I’d love to live at least for a little while not having to worry about that at all, and just writing.

7. What is one thing that your agent or editor told you during the process of publishing this book that stuck with you?
A couple of months ago, my agent, Kiele Raymond, told me, “Presses promote books; writers shape careers,” and that was such a helpful way to think about the bigger picture. It reminded me that: 1) A book is not an entire career, and 2) I can—and should—always be thinking about my writing life as a whole, and continue to work toward everything I want even as I prepare for the publication of my first collection. Her advice has also made it easier to pursue other passions right now, like writing essays and fiction that don’t necessarily have anything to do with the book.

8. What is one thing you might change about the writing community or publishing industry?
The contest model for poetry book acquisitions and unpaid journal publications. Sorry, that’s two, but they both operate on the same conceptual economy of lack that tells us we should be grateful for whatever we get because getting chosen is so hard. And that may be true, but it shouldn’t have to be.

9. Who is your most trusted reader of your work and why?
My friend Claire Jimenez. She’s an amazing fiction writer and essayist—and poet, too, but that might be a secret. I’ve learned so much from her, but the trust really comes from the fact that she’s a friend of my work, and I’ve only recently realized how important that is to me. I’ve had experiences where people tried to shape my writing to fit their own agendas or soothe their own egos, and she doesn’t do that. I know I can get an honest read from her. Plus, Claire is scrappy. When she believes in what you’re doing, she’ll fight for you, even if she has to fight against your own misconceptions about the quality of your work. I really admire that about her, and I try to give it back whenever we’re reading each other’s manuscripts.

10. What’s the best piece of writing advice you’ve ever heard?
My best piece of writing advice came from the poet-scholar Chiyuma Elliott at a Cave Canem workshop back in 2009. I was a baby poet who loved grand finales for my poems, and in her feedback, she said very gently, “At the end of a poem, leave the door open.” I’ve spent every day of my writing life since learning all the ways you can leave a door open: unlocked, cracked, off the hinges. There are so many ways.

Correction: An earlier version of this article was incorrectly edited to state that the 30/30 challenge involved thirty minutes of writing a day for thirty days. Birdsong clarified the challenge she was referring to was to write thirty poems in thirty days.

“Write with yourself and your own healing in mind, before you think of anyone else.” —Cicely Belle Blain, author of Burning Sugar

“I’ve been writing it for eighteen years. More than half my life.” —Fariha Róisín, author of Like a Bird