This week’s installment of Ten Questions features Simon Han, whose debut novel, Nights When Nothing Happened, is out today from Riverhead Books. Recent immigrants from China, the Chengs are attempting to settle into their new lives in an affluent suburb of Dallas, but find themselves drifting further and further apart in the process. Early in the novel, after a long day at her tech job, Patty Cheng wonders, “Who were these people she lived with, and what did they do when she was not there?” Her husband, Liang, is privately wrestling with his past while running an ailing photography business and caring for their children: eleven-year-old Jack, who keeps to himself, and five-year-old Annabel, a “Problem Kid” at school and a serial sleepwalker. For a while each individual’s troubles and alienations hang in a delicate balance, but then a misunderstanding involving another family in the neighborhood shatters any semblance of stability. A stirring family saga, Nights When Nothing Happens examines both the fragility and strength of the most intimate bonds. “Achingly tender and emotionally devastating,” writes Charles Yu. “A stunning debut that will stay with me.” Simon Han won the 2020 Maureen Egen Writers Exchange Award for Fiction from Poets & Writers. He is also the recipient of awards from the Bread Loaf Writers’ Conference, MacDowell, the Sewanee Writers’ Conference, and Vanderbilt University, where he earned his MFA. His writing has appeared in the Atlantic, Guernica, and the Iowa Review, among other publications. 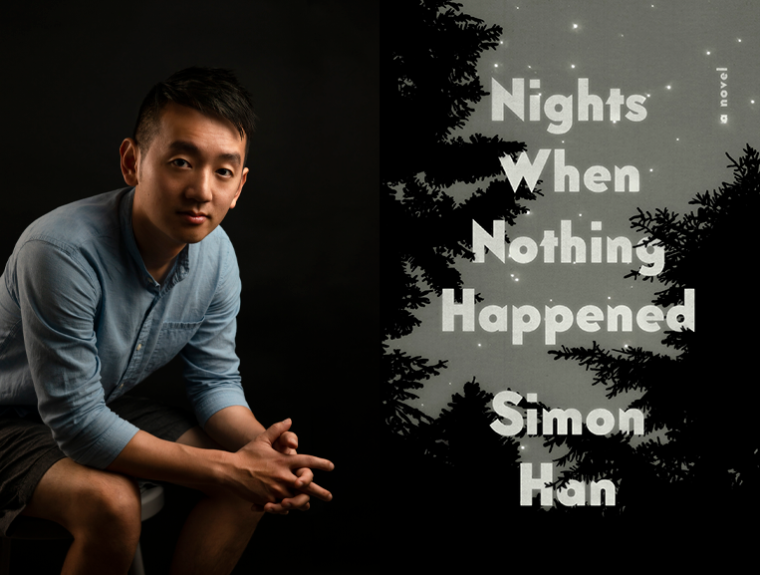 1. How long did it take you to write Nights When Nothing Happened?
About six years.

2. What was the most challenging thing about writing the book?
Understanding that it didn’t have to be, nor should it want to be, other books I love.

3. Where, when, and how often do you write?
In a different year it would be every other day or so. I try to go for two- or three-hour blocks to build momentum, to forget, even for a minute, that I’m writing at all—but that’s a luxury. Another luxury now: to write anywhere other than at this desk where I’m sitting at the moment. I miss writing in libraries so, so much.

4. What are you reading right now?
A. Kendra Greene’s The Museum of Whales You Will Never See. It’s about Iceland’s museums, the people behind them, and so much more. And Siamak Vossoughi’s A Sense of the Whole—a book of flash fiction. It’s so good!

5. Which author, in your opinion, deserves wider recognition?
I finished Yvonne Adhiambo Owuor’s novel Dragonfly Sea recently, which hadn’t crossed my radar when it came out last year. It’s great. It’s about so many things—among them China’s entanglement with Kenya on a national and personal scale. And it rewired for me how language and rhythm can work on the page. Also Colleen Abel, who has a poetry collection called Remake that explores the body and the domestic space and it’s stunning.

6. What is the biggest impediment to your writing life?
The people who gave Edward P. Jones’s books two stars on Amazon. Also Amazon.

7. What is one thing that your agent or editor told you during the process of publishing this book that stuck with you?
My editor was really good at helping me build my authority as a writer—on and off the page. To say things simply when they needed to be said simply, for example. To know that subtlety can be a form of authority.

8. Would you recommend writers pursue an MFA?
Depends. Workshop isn’t for everyone, but it was amazing for me, as someone who hadn’t known much about the literary world, to be in a space where people took my made-up stories seriously. I think I needed that to take myself seriously. I know that’s not everyone’s experience though, and an MFA is a big commitment. With the pandemic there are more and more options out there too, including affordable and accessible virtual workshops.

9. Who is your most trusted reader of your work and why?
That’s a tough one. A lot of readers helped my book to be what it is. I will say that around my wife, I get the chance to work through images and situations and characters in their rawest form—basically, she lets me vomit out my ideas to her in a completely judgment-free space. That’s pretty special.

10. What’s the best piece of writing advice you’ve ever heard?
Lorrie Moore said not to write from the assumption that you’re better than your characters. That one’s always stayed with me.