This week’s installment of Ten Questions features Morgan Christie, whose debut story collection, These Bodies, is out today from Tolsun Books. In the eleven stories that make up These Bodies, Christie examines close relationships tested by various challenges, from addiction and mental illness, to subtle disagreements and misunderstandings. Punctuated by dreamscapes, mysterious animals, and glimmers of the supernatural, each narrative is often enriched by unexpected symbolisms: In one piece, a young woman stumbles upon a shop that exclusively accepts payment in strands of hair; in another, witnessing an altercation between a coyote and a cat helps a character resolve a workplace conflict. Focusing specifically on the lives and stories of people of color, These Bodies is a rigorous, inventive study of family, community, and other bonds. Morgan Christie is a poet, playwright, and fiction writer from Toronto. The author of several poetry chapbooks, her writing has also appeared in Aethlon, Moko, Little Patuxent Review, and Room, among other publications. She received her Master of Studies in Creative Writing from the University of Oxford. 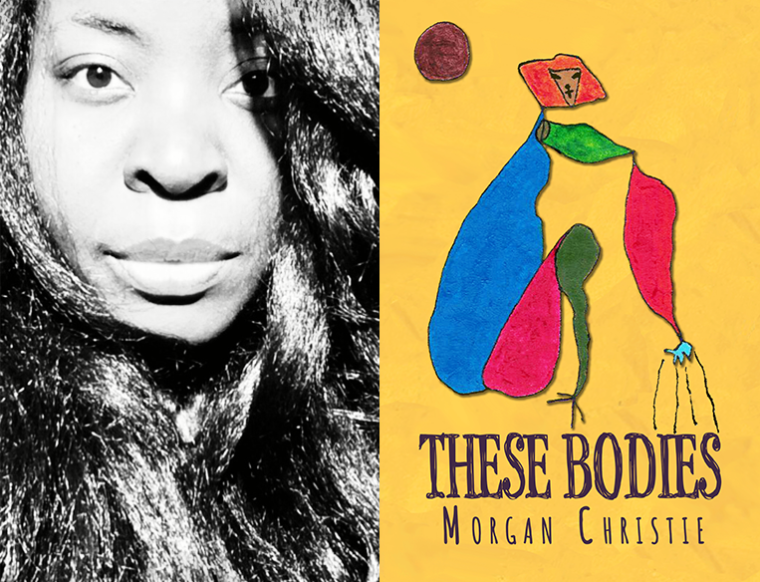 Morgan Christie, author of These Bodies.

1. How long did it take you to write These Bodies?
Four years. The vision for the collection was not preset in my mind—it just so happened that there was enough of a trend in my writing, themes, and perceptions to compile a cohesive collection. As far as the time it took to craft individual stories in the collection, that really varied. Some fell out of me in a day, or night. I’ve had multiple stories come to me in dreams, which I write immediately after I wake. Others took weeks, even months, with the editing process.

2. What was the most challenging thing about writing the book?
Probably the emotional purge that came along with the project. So many of the pieces are open flesh wounds, observing unrequited sentiment or examining norms faced by communities and people of color, members of the LGBTQIA+ community, women, people living with mental illness, individuals of lower socioeconomic statuses, and people living with addiction. We sit with these realities every day, but to pen them through prose just tugs and pulls everything up in you a lot of the time. There’s just anger and sadness in the reality of these stories, experiences, and voices. Having to carve around those emotions to craft clear and digestible fiction can be a bit trying, but always worth it.

3. Where, when, and how often do you write?
That varies. Typically all I need is a quiet space. My thoughts are disturbingly sensitive to noise. I’ve never been able to wrap my head around the idea of listening to music while I write. I did try it once, and effectively typed out a line of lyrics that I had wailed not so long before with the song playing. A bit of house clatter and chatter isn’t too bad, but I like to be somewhere I can close the door. It doesn’t always happen that way, but I prefer it. Which leads me to when I write: almost always after dark. I accepted years ago that the only scary things that go bump in the night were thoughts in my head, so I began peeling them out and looking at them when my surroundings were at rest. Love it. The world is quieter at night—I find that allows me to hear the voices and stories much more clearly. As far as how often, it just depends on responsibilities and workload. I typically aim for at least a couple of solid writing sessions a week. Sometimes it’s more, sometimes less.

4. What are you reading right now?
I’m finishing up Natalie Diaz’s most recent poetry collection, Postcolonial Love Poem, as well as the first book in the Star Trek: Picard series, The Last Best Hope by Una McCormack. I’m about to crack the spine of De’Shawn Charles Winslow’s In West Mills, and my shopping cart contains Let Me Tell You What I Saw by Adnan Al-Sayegh.

5. Which author, in your opinion, deserves wider recognition?
I can’t name a single author. There are too many. All writers not under the guise of what is formulated as literary really; so, underrepresented writers. Authors of color, LGBTQIA+ authors, writers from various socioeconomic statuses, women writers, writers living with disability or authors living with mental illness, I could go on. Those deserving of wider recognition are those who still have to fight for recognition, in the literary world and outside of it.

6. What is the biggest impediment to your writing life?
Time. Life and the responsibilities surrounding it are time-consuming, simply put. We have to try to keep a roof over our heads, food in our bellies; basic survival needs have to take priority. Being able to carve out the time, and sometimes energy, to write, edit, and rewrite can be tough. There’s never a lack of inspiration on my end—as an observer and patron of a global community I believe there’s always something to write about. It’s just finding the time amid life, and what comes with it, to get words onto paper or screen.

7. Outside of writing, what other forms of work were essential to the creation of the book?
Athletics, my love of and participation in sport. There’s a kinetic quality to the prose that I didn’t quite notice until I read the collection in its entirety. The illustration of movement and physicality is heavily influenced by my athletic career. I predominantly played basketball but dabbled in almost every sport. In examining the text I studied my language and found it reminiscent of the way I understand the fluidity, control, and movement of various games. The way wheat stalks bend and contort, how concrete feels under our feet in a sprint, our breathlessness, our muscle pulses as anxiety builds, or the way a rock can be weighted as perfectly as a baseball. I had no idea when I wrote these stories that that aspect of my life influenced the writing so immensely, but it’s everywhere if you look closely.

8. If you could go back in time and talk to the earlier you, before you started These Bodies, what would you say?
Nothing. The collection wouldn’t be what it is if I did.

9. Who is your most trusted reader of your work and why?
I’ve never thought about this. I have quite a few trusted readers, fellow writers, old professors, and so on. If I leaned in the way of trusted and transparent, I’d say a standout is Harry Man, an old tutor, poet, and friend. Harry’s understanding of my poetry and prose was the most all-encompassing and all-consuming I’d ever experienced. I’d never known someone to so wholly understand my process, utterances, and decisions the way he did. So his perspective and critiques are some I greatly cherish, as are those of many others.

10. What’s the best piece of writing advice you’ve ever heard?
Metta Sáma once told me that just like in all things, when it comes to writing, you are more than one type of writer. It was a wonderfully simplistic piece of advice that touched on the limitations we inadvertently create for ourselves. I’ll always be grateful to her for those words, and much more.