This week’s installment of Ten Questions features Robert Jones Jr., whose debut novel, The Prophets, is out today from G. P. Putnam’s Sons. At the heart of The Prophets are Isaiah and Samuel, two young enslaved men who share a secret love. Some of the other slaves on the Mississippi plantation have intuited the nature of the pair’s relationship, but most leave the matter alone—that is, until one man begins to preach the master’s gospel and persuade the others that Isaiah and Samuel pose a danger to the group. Narrated by an ensemble of characters, including Isaiah, Samuel, ancestors from the distant past, and many others, The Prophets is a sweeping tale of both pain and joy. “The Prophets shakes right down to the bone what the American novel is, should do, and can be,” writes Marlon James. Robert Jones Jr. was born and raised in New York City and earned his MFA at Brooklyn College. Featured in “Black Male Writers for Our Time” by T: The New York Times Style Magazine, his writing has appeared in numerous publications, including Essence, OkayAfrica, and the New York Times. He is also the founder of the social media community Son of Baldwin. 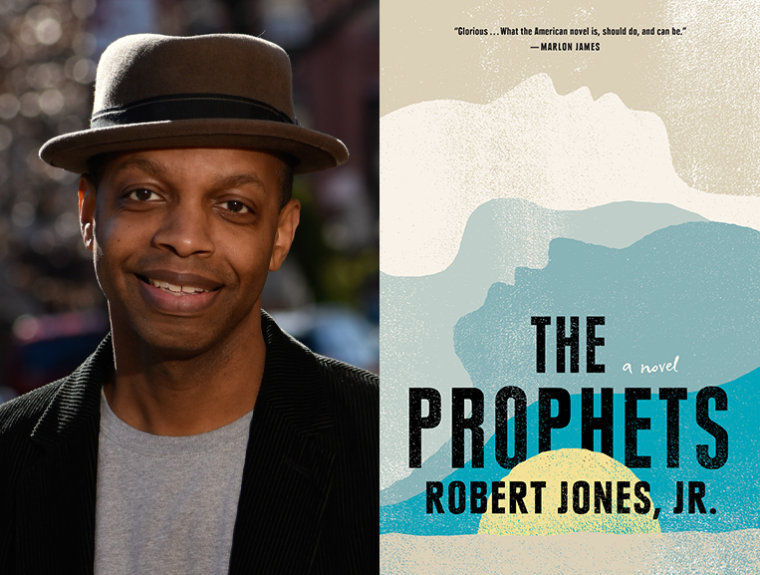 1. How long did it take you to write The Prophets?
I began writing the very first sketches of The Prophets in my first year of graduate school in 2006, and I made the very last changes to the final manuscript in 2020. So technically it took me fourteen years to write the book that will hopefully make it into many readers’ hands, ears, minds, and hearts.

2. What was the most challenging thing about writing the book?
The most challenging thing about writing The Prophets was trying to conjure up what it would have been like to be both Black and what we now call queer during antebellum slavery. I could find nothing in the established canon about this outside of examples of sexual assault, and I was looking for representations of love. And because I couldn’t find it in the texts, I had to imagine it through what I guess was ultimately communing with my ancestors.

3. Where, when, and how often do you write?
Because I created and run the social justice and social media platform Son of Baldwin, much of my writing—mostly nonfiction—appears there. I’m writing there constantly, commenting on the social and political turmoil we experience as people from marginalized communities, writing in my home office, sitting at my desk, typing on my laptop. In terms of fiction, I like to write in public spaces like mass transit or sitting on the stoop in front of my house. But sometimes I’m up at the witching hour jotting things down on whatever’s available—laptop, smartphone, or scraps of paper.

4. What are you reading right now?
I just finished Maisy Card’s remarkable These Ghosts Are Family. I’m halfway through Deesha Philyaw’s stunning The Secret Lives of Church Ladies. Up next are Kiese Laymon’s reissue of How to Slowly Kill Yourself and Others in America, Bryan Washington’s Memorial, and an advance copy of Jessamine Chan’s The School for Good Mothers. There’s another stack of books I have to get to as well. I love being surrounded by books.

5. Which author, in your opinion, deserves wider recognition?
Gayl Jones. I was stunned to discover that she’s considered an “overlooked writer.” She’s clearly brilliant and it’s evident to anyone who reads her work that she’s probably the greatest living writer in the United States. It’s absolutely puzzling to me that more people don’t know who she is, that more people haven’t read her work, that her name isn’t mentioned with Hemingway, Baldwin, Faulkner, and Morrison, and that she hasn’t won every literary prize in existence.

6. Would you recommend writers pursue an MFA?
Yes—for this one crucial reason: to understand how to give constructive criticism and how to receive constructive criticism. I attended the fiction program at Brooklyn College and one of the most valuable things I learned was not to be precious with my writing and to recognize that 99 percent of writing is revision. Sometimes we as writers don’t realize that a first draft is not a completed draft and that we have to rewrite even the parts that we personally believe are sublime. The more we work on it, the greater the result. Writing is revision. Period. That’s not glamorous, but it is rewarding.

7. What is one thing that your agent or editor told you during the process of publishing this book that stuck with you?
It isn’t anything that they told me specifically, but what I learned was that it is critically important to have both an agent and an editor who believe in your talent, share your goals, understand your vision, and are completely interested in ensuring that your integrity and the integrity of your work is protected at all times. I’m so lucky that I have no half-steppers on my team.

8. What, if anything, will you miss most about working on the book?
I’ll miss particular characters, some of whom I wanted to spend more time with—like King Akusa, for example. I would love to delve into her history and think about how she became ruler of her people and how expansive her love is.

9. Who is your most trusted reader of your work and why?
My husband, Adrian. He is a Virgo and a lawyer, which means that his mind is a razor, his eye is keen, and his tongue is sharp. That also means I’m going to get the unvarnished truth about my work and really get the chance to polish it before it’s seen by other people.

10. What’s the best piece of writing advice you’ve ever heard?
The best writing advice I ever heard came from the late, great Toni Morrison: “If there’s a book you want to read, but it hasn’t been written yet, then you must write it.” If she hadn’t said that, I might not have had the courage to write The Prophets.