This week’s installment of Ten Questions features Torrey Peters, whose debut novel, Detransition, Baby, is out today from One World. Reese is proud to have served as a mother figure for several other young trans women in New York City, but above all else she longs to have a child of her own. To become a mother, she believes, is to be “granted the womanhood that she suspected the goddesses of her childhood took as their natural due.” She had once imagined she would build a family with her partner, Amy, until Amy chose to detransition, and go by Ames, leading their relationship to fall apart. But now three years after the breakup, Ames reappears with the news that his new lover, Katrine, is pregnant, and he proposes that the three of them raise the child together. And while all three characters carry fears and uncertainties, they set out to envision a family on their own terms. An honest and loving portrait of trans feminine culture, Detransition, Baby offers new visions for motherhood and kinship. “Torrey Peters evokes these characters with such fullness and compassion that they felt like dear friends to me,” writes Helen Phillips. “This is an important book, and I couldn’t put it down.” Torrey Peters is the author of the novellas Infect Your Friends and Loved Ones and The Masker. She holds an MFA from the Iowa Writers’ Workshop and an MA in comparative literature from Dartmouth. Born in Chicago, she lives in Brooklyn, New York. 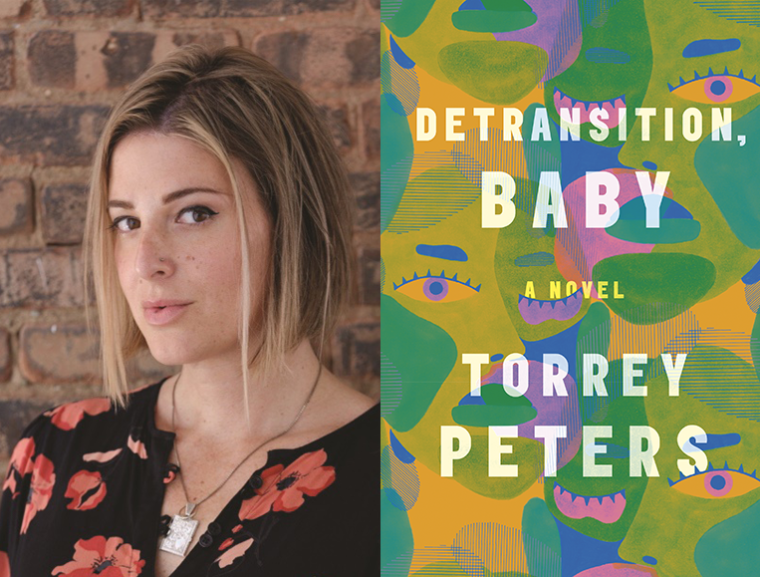 1. How long did it take you to write Detransition, Baby?
I started in the summer of 2016 and had a complete draft of it by 2019, but then I spent another year revising and writing a different ending.

2. What was the most challenging thing about writing the book?
It was a time in my life when I was figuring out, basically, how to live as a trans woman after the drama of transition had passed. Which is a lot of what the book is about as well, but it meant that my setbacks in life were also setbacks in the writing process. Bad boyfriends, intermittent finances, odd living situations: They happen in the book, but first they happened in life, and I had to recover from them to have the time and space to write. Finally I read a bunch of horribly square business books on time management for like, thwarted corporate middle managers, which embarrassingly taught me more about how to separate my writing from other parts of life than any advice meant for writers.

3. Where, when, and how often do you write?
When I have a project I’m into, I can write for about four hours a day, and can do it steadily in the mornings. I have been restoring a tiny, old off-the-grid log cabin in Vermont, and as soon as I get some solar power going up there, I’m pretty excited to start working with no internet access and just a wood stove to distract me.

4. What are you reading right now?
I have always wanted to be in a literary moment or scene, a place and time where other authors care a lot and share their work. I’ve always had fantasies of the Harlem Renaissance or Paris in the twenties...only with trans and queer authors. Maybe it’s finally happening! I’ve got just-finished unpublished manuscripts by Zoe Whittall and Casey Plett that I’ve just started in on. Big Canadian representation in this answer!

5. Which author, in your opinion, deserves wider recognition?
T Fleischmann. Their last book, Time Is the Thing a Body Moves Through, I believe, will eventually be looked back on as an important work in nonbinary thought. Often really great books arrive ahead of their time and, therefore, wide recognition comes with a delay. It takes a while for the rest of us to realize we’ve been given brilliance, but after some years, we figure it out. I believe that will be the case with T.

6. What is one thing that your agent or editor told you during the process of publishing this book that stuck with you?
This is a hard question, because neither my editor, Caitlin McKenna, nor my agent, Kent Wolf, speak in quotable aphorisms. Instead, to their credit, they are about long, slow hard work. I think that a lot of writers believe they need tank-like champions in agents and editors to take on the murky forces of the publishing world. But Kent and Caitlin are exceptional in that they have set me up to solve a lot of the publishing world problems myself. I feel confident in talking about why my book matters to both publishers and readers, and I feel that way because Caitlin and Kent have positioned me to speak for my book, instead of setting themselves up as arbiters and gatekeepers. They are an agent and editor confident enough to relinquish power back to the authors with whom they work. I mean that as the highest compliment.

7. Outside of writing, what other forms of work were essential to the creation of the book?
Fighting and loving other trans women. Especially other trans women artists. The book contains a lot of collective knowledge about how to make our work resonate, how to be honest, what we owe each other, and the ethics of exposing each other’s flaws for outside audiences. That didn’t just happen in the book. It happened in living rooms, in parties, at bars, working together, hurting each other, and afterwards trying to make it right—or occasionally, holding grudges.

8. What is one thing that surprised you during the writing of Detransition, Baby?
How much the writing of it changed me. It was a bit of an exorcism. It holds parts of me that are now gone from my current self. I read some of the chapters and I’m like, “I wrote that? I’m really no longer the person who would write that.” But I remember being that person, and I remember the process of the book taking that piece of me—not always bad things, sometimes even humor. I’ll read something and think, “Wow, imagine still being bitchy enough to be funny like that.”

9. Who is your most trusted reader of your work and why?
My girlfriend, Chrystin. Her intelligence is totally different than mine. She’s a law professor and I feel like her mind is a deep digester, a ruminant. So she’ll read something and come back three days or a week later with it completely processed, and will be like, yeah, I wrung everything nutritious out of it, chewed the cud many times, and passed it through all four of my stomachs, but in the end, I’m missing these specific essential vitamins.

10. What’s the best piece of writing advice you’ve ever heard?
I don’t think there’s any one piece of advice that’s always correct. What works for one project doesn’t always matter in the next—perhaps presumptuous for a debut novelist to say that, but in my experience, it’s true! So instead of responding with a quote, I’m going to respond with a book. Even though I write fiction, I find myself turning to Mary Karr’s The Art of Memoir when I’m stuck. I’ll reread it, and usually in one of the chapters I stumble across a key to unlocking experiences that I can turn into fiction. Each time the necessary key has been different, but she’s stashed many keys in that book.