This week’s installment of Ten Questions features Edward Carey, whose latest novel, The Swallowed Man, is out today from Riverhead Books. In The Swallowed Man, Carey reimagines the classic tale of Pinocchio from the father’s point of view. The novel begins inside the belly of a monster-fish, where the carpenter Giuseppe “Geppetto” Lorenzini became trapped after venturing into the sea in search of his runaway wooden son. Writing in an old journal—scavenged from the stomach of the beast—Giuseppe addresses the reader directly, relaying not only the joy of creating Pinocchio but also the misfortune that followed: “Have you ever had those moments when, without quite knowing how, your art comes through with more grace, more life in it, than you had supposed possible?” Accompanied by the author’s own illustrations, The Swallowed Man is a surreal and intimate portrait of a father in crisis. “The Swallowed Man is profound and delightful,” writes Max Porter. “It is a strange and tender parable of two maddening obsessions; parenting and art-making.” Edward Carey is a novelist, illustrator, and playwright. His previous novels include Little, Observatory Mansions, and Alva and Irva: The Twins Who Saved a City. He is also the author of the acclaimed Iremonger Trilogy for young adult readers. Born in England, he lives in Austin, Texas. 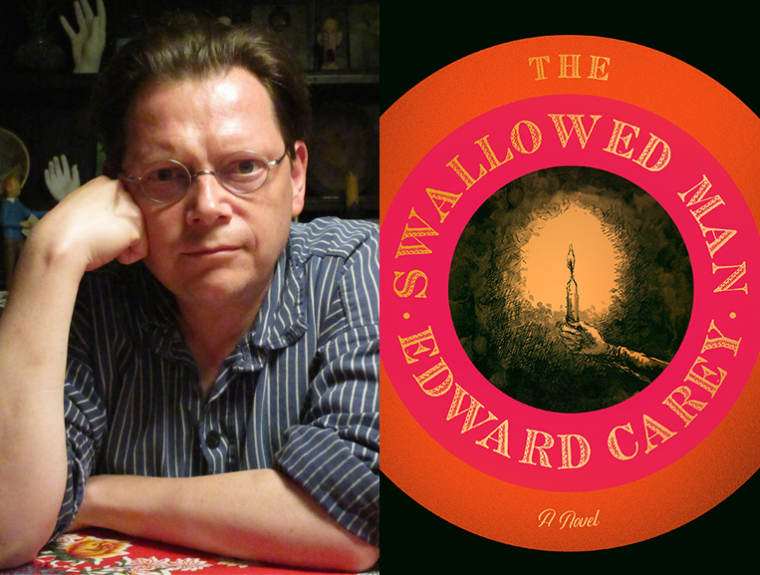 1. How long did it take you to write The Swallowed Man?
A couple of years. The book is the journal and art of the two years Geppetto spent inside the belly of a gigantic sea beast. Originally the book was a sort of catalogue to an exhibition at the Parco di Pinocchio in the town of Collodi, Italy. Since then, the book has changed rather a lot. There’s new art—I always illustrate the books I write—and a new character called Ill-face, a very unpleasant, burnt puppet who haunts Geppetto.

2. What is the earliest memory that you associate with the book?
I read the story of Pinocchio as a child but I think it must have been in a very adulterated version, probably by Disney. I don’t think I read the book properly until I was commissioned to adapt Robert Coover’s wonderful novel Pinocchio In Venice for the National Theatre of Craiova in Romania. Since then I’ve been obsessed by Carlo Collodi’s original story, which is dark and strange and full of life. I think of Pinocchio as something like the patron saint of objects. And when I was in my early twenties I saw the beautiful wooden Jesus in the Basicila di Santo Spirito in Florence, carved from wood by Michelangelo at age eighteen, and the sculpture seemed to me a relative of the famous Tuscan puppet.

3. What was the most challenging thing about writing the book?
I wanted to explore Geppetto as a character. He’s abandoned by Collodi for two years inside the belly of an enormous shark, but Collodi gives us no information on what that imprisonment was like, except that there’s a wrecked ship inside the belly with him. Collodi’s book keeps asking the question from the puppet’s viewpoint, “What is a human?” I thought that Geppetto must have asked himself the same question during his confinement.

4. Where, when, and how often do you write?
I used to work in my office on campus at the University of Texas at Austin, but that hasn’t been possible for some time. Now it’s on the dining room table, or in the bedroom or in a studio a walk away, which is also where I teach from. Since the pandemic I’ve put one novel on hold and written a draft of another. My main way of getting through this strange time is doing a drawing a day and posting it on Twitter and Instagram. Every day without fail. Small marks with a pencil. Sometimes I draw something someone suggests, sometimes the drawings are in relation to current events, sometimes they’re because I’m missing England and I draw something from home. If I’m not able to write I can at least draw a little, every day.

5. What are you reading right now?
One Thousand and One Nights. I’m teaching a class on fairy tales and right now I’m getting lost in that extraordinary ocean of stories. The best way I can think of traveling during a pandemic.

6. Which author, in your opinion, deserves wider recognition?
I wish more people knew of the fairy tales of Giambattista Basile. He wrote his extraordinary collection The Tale of Tales in the 1600s, but he wrote in the Neapolitan dialect and, unless you were from Naples, you wouldn’t be able to understand them. He died of plague in 1632, and his sister published his masterwork after his death. For centuries no one read his work, or only saw it in poor translations. Not until 1925 did Benedetto Croce translate Basile into Italian, and we did not get a brilliant English translation until Nancy L. Canepa published one in 2007. Oh, it’s so good. He wrote, for example, many amazing sentences about dawn. Here’s one: Until Dawn brought the news that the Sun had been found alive, and the sky shed its mourning clothes.

7. If you could go back in time and talk to the earlier you, before you started The Swallowed Man, what would you say?
I would say, “Stop! Don’t do it. Put the computer down. Go outside, get on a plane, go and see friends, go to the theater, go to the cinema, go to restaurants. Stop sitting in a corner, you’re going to be stuck inside a bungalow in Texas for at least a year which is a little too similar at times to being inside the belly of a giant sea beast, go, get out, SEE PEOPLE while you still can!”

8. What is one thing you might change about the writing community or publishing industry?
Diversity.

9. Who is your most trusted reader of your work and why?
My wife, the writer Elizabeth McCracken. She’s wise and kind and very sharp. I trust her absolutely. She’ll tell me the truth, but she’ll tell it to me in such a way that I’ll feel excited about going back to work.

10. What’s the best piece of writing advice you’ve ever heard?
I really love this from Italo Calvino: “Instead of making myself write the book I ought to write, the novel that was expected of me, I conjured up the book I myself would have liked to read, the sort by an unknown writer, from another age and another country, discovered in an attic.”

“I can’t imagine myself without this book.” —Jana Larson, author of Reel Bay