Early in March a box was erected outside the Association for the Advancement of Mexican Americans (AAMA) in Houston. Orange and with a slightly pitched roof, the box stands on a short post and bears illustrations by John Parra from the children’s book Little Libraries, Big Heroes (Clarion Books, 2019). It is large enough to hold at least twenty books for neighborhood residents to borrow and read. 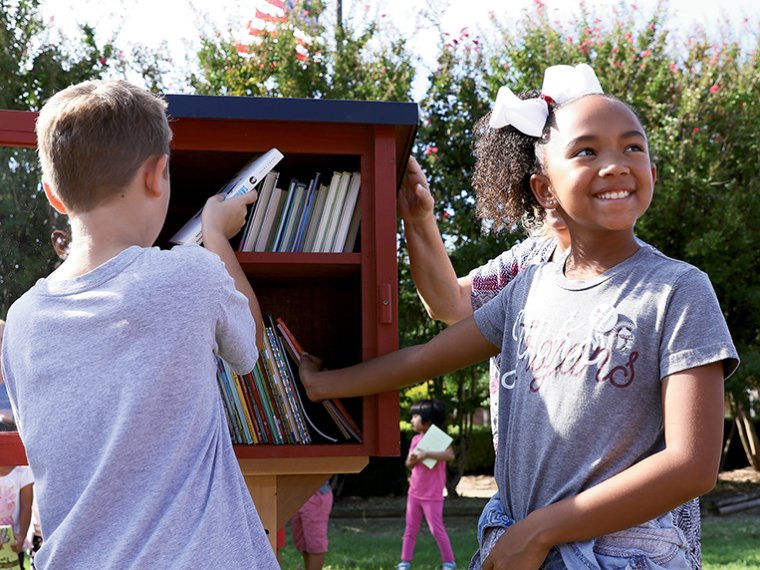 This box is a Little Free Library, the work of the eponymous Wisconsin-based nonprofit that seeks to increase both access to and love for reading within communities. When the organization’s founder, Todd Bol, first placed a schoolhouse-shaped box in his yard in 2009 as a memorial to his mother, he wanted to foster book exchanges among his neighbors. In 2012, Bol founded the related nonprofit, and when he died in 2018 there were more than seventy-five thousand Little Free Libraries in eighty-eight countries. In Bol’s New York Times obituary, his brother Tony spoke of the program’s success: “What was powerful about it was that all you needed was the idea.... You just build it, or order it, then put it up in your yard, like a public art monument.”

The box outside the AAMA isn’t just any Little Free Library—it’s the one hundred thousandth Little Free Library in the world, and it was made possible through the Impact Library Program, an initiative launched in 2016 that has so far provided more than one thousand no-cost boxes to applicants in communities where books are scarce. Recipients commit to setting up the library and maintaining it for at least a year, taking a picture and sharing its story, and holding a book-related neighborhood activity. Applications are also frequently part of larger initiatives to build connection around books; Denver’s Montbello neighborhood, for instance, hopes to eventually erect numerous libraries along “walkable loops throughout the community for families to enjoy [for] walking and bicycle riding.”

Along with fostering community and a love of reading, the Impact Library Program seeks to improve literacy nationwide. According to the U.S. Department of Education and the Program for the International Assessment of Adult Competencies, forty-two million adults in the United States cannot read in English at a third-grade level—and a lack of access to books contributes to this crisis. This lack is often particularly pronounced in Native communities, and a special branch of the Impact Library Program, the Native Library Initiative, has so far placed sixty-nine book-sharing boxes on tribal lands. The poet Heid E. Erdrich says in a short video about the initiative, “Little Free Libraries are not just going to be in suburban yards and on street corners anymore; there are Little Free Libraries popping up on reservations and in Native communities across the United States.” An Impact Library Program application from Jamie P. in South Dakota, who received a box in 2018, described the need for a local book exchange: Their reservation the size of Connecticut had only one library, few families owned vehicles, the schools were overburdened, and not many people had internet access.

The Impact Library Program’s mission to expand access to books near children’s homes has only grown more important since the donation of AAMA’s orange box in March. In May the Associated Press noted an increase in Little Free Libraries during the COVID-19 pandemic, both in their original capacity as book-sharing locations and as “little free pantries” offering canned food donations, jigsaw puzzles, handmade masks, and more. Between March and September 2020 the Impact Library Program saw 40 percent more applications than during the same period in 2019, and according to Shelby King, the director of programs at Little Free Library, these applications frequently cite pandemic-related school and library closures as reasons a book-sharing box would make a difference.

Candice Arancibia, a third-grade teacher and literacy coach who received a box for her home near the Mexico-California border through the Impact Library Program in September, applied after noticing that during distance learning her students have limited access to books—and those they do have “often aren’t those of the BIPOC experience.” She hopes her new box will make it easy for children from local schools to come by and find books that resonate with them.

King says the importance of sharing diverse books has been a common refrain in recent applications. In response, Little Free Library has launched the Read in Color initiative, through which library stewards and others can pledge to share books that incorporate experiences and perspectives from people of many different identities. Distributing both diverse and anti-racist books is particularly important, Arancibia says, because “it’s not until we begin to share our stories that we can actually begin to be seen, and we start to understand people and build empathy.”

Emma Hine is the author of Stay Safe, which received the 2019 Kathryn A. Morton Prize in Poetry and will be published in January 2021 by Sarabande Books.

Poetry to the People Tour
by Maggie Millner | News and Trends 6.12.19

In collaboration with Narrative 4, the House of SpeakEasy’s bookmobile will travel from New York City to New Orleans and give books to schools, prisons, and libraries along the way.

Now in its fifth year, the New York City–based Uni Project has installed hundreds of pop-up reading rooms in public spaces, bringing books to underserved communities throughout the city and beyond.