Poetry to the People Tour

For the past two years the literary nonprofit House of SpeakEasy has been bringing books to neighborhoods in and around New York City in the back of its bookmobile, a festive maroon box truck outfitted with bookshelves and movable side panels that serves as a pop-up bookstore and donation center wherever it’s parked. This June, in collaboration with storytelling organization Narrative 4, the bookmobile will undertake its longest journey yet, traveling fifteen hundred miles from New York City to New Orleans and making stops in seven states along the way. 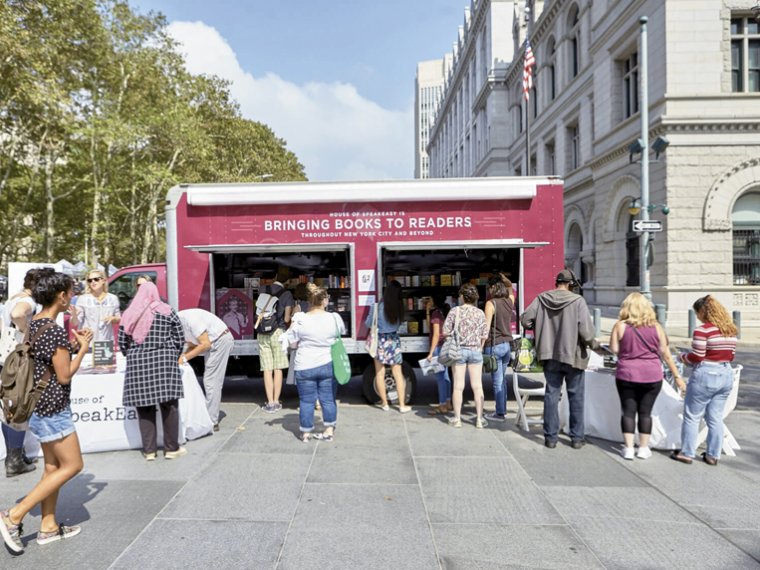 The House of SpeakEasy’s bookmobile at the Brooklyn Book Festival in 2017.

During this expedition, called the Poetry to the People Tour, representatives from House of SpeakEasy and Narrative 4 will host events and donate books to local libraries, schools, and prisons. The truck will then roll into New Orleans on the first day of Narrative 4’s annual Global Summit, a five-day event for teens and young adults to share stories and build leadership skills. “I knew that we were heading to New Orleans for the summit, so I had a wild idea to drive there and give out books in underserved spaces along the way,” says Rob Spillman, who works with Narrative 4 and is more widely known as the editor and cofounder of Tin House, which published its final issue in June. “The House of SpeakEasy team and the Narrative 4 team both loved the idea, so we joined forces.” Spillman also contacted DonorsChoose.org, a nonprofit that connects potential donors with teachers in public schools, to identify classrooms with specific book needs and help map the tour’s route.

Running from June 13 to June 21, the tour will make stops in New York, Pennsylvania, Ohio, Kentucky, Tennessee, Mississippi, and Louisiana. Spillman will share driving duties with Jeff Waxman, partnerships director of House of SpeakEasy, and a few guest poets will even take brief stints behind the wheel. Over the course of their winding southward journey, the motorists will distribute more than four thousand books to prisons, libraries such as the Floyd County Public Library in Kentucky, and schools such as Plum High School in Pittsburgh.

While the donated books encompass a range of genres from self-help to literary fiction, according to the needs of each institution, events on the tour will emphasize poetry, which Spillman and Waxman agree is a particularly galvanizing outlet for young people today. “Right now poetry feels incredibly urgent,” Spillman says. “It is able to address the current, horribly unsettled moment better than most prose. The poets on the rise today—Morgan Parker, Danez Smith, Tommy Pico, Solmaz Sharif, Natalie Diaz, Kaveh Akbar, Ross Gay, Rickey Laurentiis—are also reflective of the real diversity of our country. Their poetry connects with teens in an immediate, visceral manner.” The tour’s schedule of events reflects that belief: On June 14 the Free Library of Philadelphia will host a story exchange, a workshop, and a reading featuring local teens alongside Philadelphia poet laureate Raquel Salas Rivera and writer and educator Rayna Guy. And on June 15 poets Jenny Johnson and Rickey Laurentiis will perform at the Carnegie Mellon Library in Pittsburgh.

The tour has naturally grown out of both organizations’ work to produce creative events that bring people together through stories or books. In addition to selling and donating books from the windows of its bookmobile, House of SpeakEasy hosts a series of literary cabarets in New York City that feature prominent writers and thinkers reading and riffing on a given theme. The organization also subsidizes tickets for teachers and students to attend literary events for free and sends working writers into classrooms and community centers throughout the city. Narrative 4, which has chapters in twelve countries on four continents, conducts story exchanges—events in which participants pair off to swap their stories and then retell those stories to the larger group—among people with different perspectives who wouldn’t otherwise meet, such as teens from public and private high schools or refugees and public opponents of refugee resettlement.

The organizers want the tour to bring this work to communities they have not reached before. “The mission of Narrative 4 is to harness the power of the story exchange to equip and embolden young adults to improve their lives, their communities, and the world,” Spillman says. “We are all about making connections through story, and the Poetry to the People Tour allows us to share stories and poems in person and make in-person connections across age, race, class, and geographic differences.”

Maggie Millner is a poet and teacher from rural upstate New York. Her poems have appeared or are forthcoming in the New Yorker, Ploughshares, Gulf Coast, and ZYZZYVA. Previously she was the Diana & Simon Raab Editorial Fellow at Poets & Writers Magazine.

The influence of Instagram on the way we read poetry.