Filmmaker Jennifer Crandall first visited Alabama in 2013 on a short-term assignment for Alabama Media Group, a digital media company that produces television and video programming and publishes three of the most prominent newspapers in the state. Though she was living in Amsterdam at the time, Crandall was so inspired by Alabama that she moved to Birmingham, became the company’s first artist-in-residence, and began developing a documentary project that would showcase the state’s citizens. But rather than use a traditional interview format, Crandall decided to center her project around Walt Whitman’s iconic 1855 poem “Song of Myself” for its celebration of American identity. She has since spent the past two years traveling throughout Alabama, filming people reading from the poem. The resulting series, Whitman, Alabama, captures the spirit of the state and its people while illustrating the many themes of the poem—race, religion, politics, sexuality, and immigration—that the nation continues to wrestle with today. 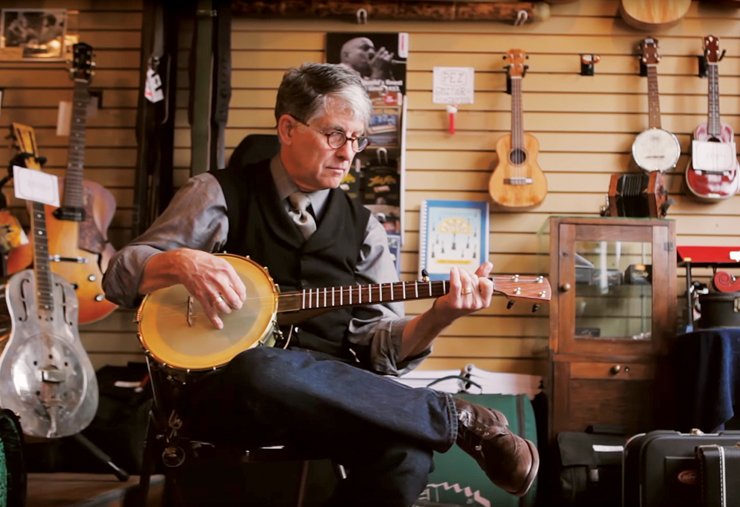 Bob Tedrow, a concertina maker in Birmingham, Alabama, plays the banjo as part of his reading of verse 7 of "Song of Myself" for the Whitman, Alabama project.

The first installment in the series featured ninety-seven-year-old Virginia Mae Schmitt, who has since died, reciting the poem’s famous opening lines. “I celebrate myself, and sing myself,” reads Schmitt from an armchair in her living room in Birmingham. “And what I assume you shall assume.” Since that initial shoot, Crandall, with the support of Alabama Media Group and the help of fellow filmmakers Bob Miller and Pierre Kattar, has filmed around forty of the fifty-two planned films; she posts a new video to the project website (www.whitmanalabama.com) each week. The project features a diverse group of Alabamians, including Bob Tedrow, a concertina maker in Birmingham; Mariam Jalloh, a fourteen-year-old immigrant from Guinea living in Birmingham; and Demetrius, Frederick, Patricia, and Tammy—all inmates at prisons in Montgomery.

"Song of Myself" Verse 1 by Virginia Mae Schmitt

Acquaintances and friends introduced Crandall to several of the project’s readers, but she approached many people at random too. Crandall was surprised by how readily Alabamians agreed to being filmed. Each subject is asked to read from one of the poem’s fifty-two verses. “No matter what way we went about it, people just said yes,” says Crandall, who notes that the project is not about making the audience into Whitman experts. “Most people have heard of Whitman, from Alabama to anyplace else I’ve been, but they are not really conversant in his work. Fundamentally, it’s a project about getting Americans more conversant about who we are as Americans.”

Crandall strives to make the videos intimate reflections of the subjects and to film them in environments where they can be fully themselves: a living room, for instance, a front porch, or the woods. Each video juxtaposes candid moments alongside the recitation. A group of teenagers skateboard, dance, beatbox, and tease one another in a vacant lot while taking turns reading verse 21. One participant, Beth Spivey, recounts getting into her car in the middle of the night to chase a vandal down the road before reading the opening lines of verse 34.

Crandall embraces spontaneity in her process. She filmed verse 43 by driving along Route 43 and seeing whom she might encounter. While passing through the small city of Union Springs, she met Anthony Stewart, who was sitting under a tree. When she asked him to read a portion of the poem, he explained that he has a hard time reading. In the video, Crandall can be heard feeding Stewart the lines from behind a tree. The result is moving: Stewart repeats complex language with composure, lines Crandall herself stumbles over. “I’m not a good reader, but I’m a good singer,” Stewart says. The scene closes with Stewart singing as a thunderstorm breaks over Union Springs. “That is the stuff I live for,” says Crandall. “Each of these verses has its own fingerprint, which has to do with the people behind the camera, in front of the camera, and the Whitman verse chosen. This project is 51 percent serendipity, 49 percent planning. It’s a gamble, but part of what we do is in the spirit of the moment. We work with what people give us. Everyone is a coauthor in that they feel some sense of ownership.”

In the opening verse of “Song of Myself,” Whitman proclaims, “every atom belonging to me as good belongs to you.” This sentiment lives at the heart of Crandall’s series, celebrating the disparate lives of individuals while emphasizing our unity as a nation. “Whitman wrote the poem at a pretty divided time,” Crandall says. “He did a lot of work to help us empathetically understand who we could be and didn’t restrain himself to the time and place he was from. He offered us guidelines for how to think of ourselves as Americans. We are inextricably linked to one another and no one particular thing. Today we’re struggling with that.”

The irony of using the words of Whitman, a Northerner, to showcase the South does not escape Crandall. “Bringing this poem to life by Southerners was an attempt to remind us that if you’re a Northerner, you’re also a Southerner. We are part of each other.”

Maya C. Popa is a writer and teacher based in New York City. She is the author of the poetry chapbook The Bees Have Been Canceled (New Michigan Press, 2017). Her website is www.mayacpopa.com.

The New York Shakespeare Exchange is working with filmmakers and directors to produce collaborative video adaptations of Shakespeare’s sonnets, bringing the Bard’s timeless poems to a new audience.

With an app, a website, and a fleet of rotary-style pay phones, the new interactive project Call Me Ishmael allows readers and book lovers to call the fabled sailor and leave him personal messages about their favorite books.

Dear Readers, You Are Not Alone
by Andrew McFadyen-Ketchum | News and Trends 12.14.16

A new literary trend is gaining traction across the country: Silent Book Clubs, parties in which a group of people gather at a bar, library, or private home to read together silently.