Dear Readers, You Are Not Alone 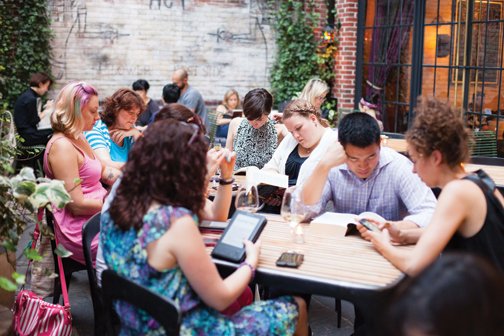 Here’s how it works: A group of friends and strangers meet at a bar or library or private home once a month and read together. They don’t read the same book. They can come and go as they please. They’re not even expected to discuss what they’re reading. All they do is read, in a shared space, together, as a community. And while some show up, read, and leave without saying a word, many pass notes, laugh out loud, or share paragraphs they particularly love with one another.

“A lot of people end up hanging out all night,” says de la Mare, whose organization helps people start their own clubs across the country and overseas. “It’s a community-driven movement to get people out in public and switch out their phones for a book.”

The original silent reading party was held in 2009 by Christopher Frizzelle, who hosts a monthly meeting at the historic Sorrento Hotel in Seattle. “This is literature standing up for itself,” says Frizzelle, who is also the editor of the Stranger, an alternative weekly published in Seattle. “TV is so good now. Breaking Bad and The Wire are basically novels, and TV is an easier, more social act. Reading, on the other hand, no matter what it is, isn’t something you typically do with other people. Silent reading parties change all that.”

Since that original party eight years ago, writers and book lovers around the world have followed suit, launching their own silent reading parties in places like Bangalore, India; Brooklyn, New York; Portland, Oregon; Evansville, Indiana; and Spokane. This past April, writer Daniel Handler (also known as Lemony Snicket), started a silent reading party at a hotel bar in San Francisco, and donates a portion of the bar proceeds from each meeting to local libraries.

“The beauty of the parties is that they’re so easy,” Frizzelle says. “People interested in starting a reading party somewhere call me for advice. Nothing actually happens at the series, I tell them. People just get together and read. So I give them my blessing and tell them to keep it simple.”

Why are these groups where “nothing actually happens” so popular? Frizzelle thinks it’s obvious: “Reading is such an isolated activity,” he says. “You’re alone. The room is quiet. You don’t have anyone to share what you’re reading with. Which is all great, it’s part of why we read. But sometimes you want to be where things are happening too, like a bar.”

Ryan Molden, a regular attendee of Frizzelle’s silent reading party, echoes this sentiment, but with a twist: “When I first started going, I had just gone through a really hard breakup and was looking for new ways to meet people. I love to read, so I thought I would check it out. Long story short: I didn’t meet my girlfriend Jessica there, but when I asked her to join me, about a year and a half ago, we fell in love, and we just moved in together.” Molden adds, “The readings provided a great way to get to know each other. And seeing so many people engrossed in reading, in a time where reading is not exactly considered cool? That’s inspiring. We’re both so glad for the opportunity to share that time together. It’s the kind of thing the world needs more of.”

For de la Mare, silent reading parties help her carve out time to read in a busy schedule. “Being a mother,” she says, “you’re often completely alone. All day. And though I’ve identified as a reader my entire life, it was really hard to give myself permission to do something for me when I was raising my toddler. The silent book club gave me that permission. That’s a gift I wouldn’t, now that I have it, go without.”

Andrew McFadyen-Ketchum is a freelance writer, editor, and writing coach. He is the acquisitions editor of Upper Rubber Boot Books, founder and editor in chief of poemoftheweek.org, and founder of the Colorado Writers’ Workshop. His poetry collection, Ghost Gear, was published by the University of Arkansas Press in 2014. His website is andrewmk.com.