Growing up in Little Rock, Arkansas, in the nineties, Alvin Irby wasn’t much of a reader. “Reading books for pleasure wasn’t a part of my childhood,” he says. It wasn’t until high school—when Irby “started to understand the political and societal implications of reading,” and more specifically which groups of people tend to be excluded from reading—that the activity became something more than a chore. Today Irby is committed to making books and reading fun for children, in particular black boys—who report some of the lowest reading scores among children in the United States—through Barbershop Books, a literacy program that creates child-friendly reading spaces in barbershops and also trains barbers and other adults to help teach early literacy. 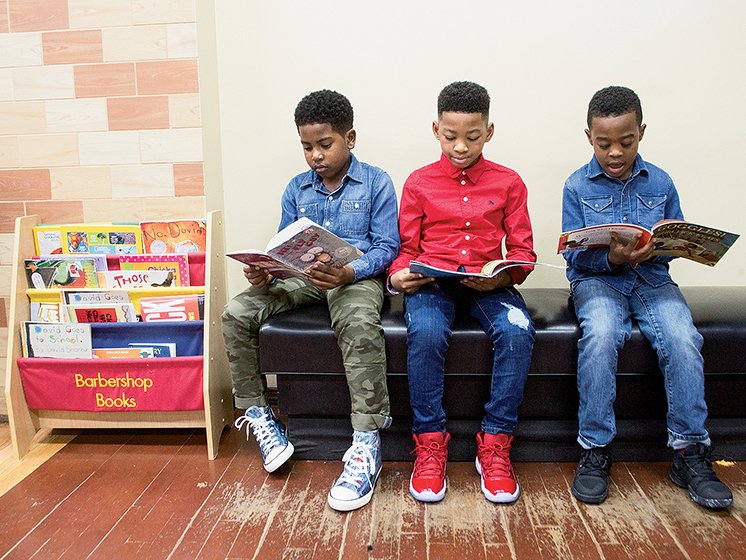 Irby, who now lives in New York City, began installing shelves of children’s books in Harlem barbershops in 2014. He chose barbershops because he wanted to find black male–centric spaces to promote a love of reading among young black boys. The statistics, after all, are startling: In 2010 the Council of the Great City Schools, a coalition of seventy of the nation’s largest urban public school systems, reported that while 38 percent of white fourth-grade boys are proficient in reading, the number for black boys of the same age is only 12 percent. Through Barbershop Books, Irby hopes to reach kids before the fourth grade. In the program’s early days, Irby spent his own money to buy books for all ages. “When I put the books in a barbershop, I observed for hours and hours that it was the young kids who were most likely to engage with the books,” he says. He realized that books for readers ages four to eight, a period critical for reading development, seemed to be the most useful.

Unlike many early reading programs, Barbershop Books focuses not on reading skills but on what Irby calls “reading identity.” This means building boys’ motivation to read and helping them form a self-image as readers. Developing a reading identity is key to increasing literacy, Irby says, and is a different approach than that taken by most schools, which often focus on assessment, test scores, and skills development. The fun is lacking, Irby says, so reading becomes tied up in pressure and judgment rather than pleasure.

Barbershop Books attributes the low reading proficiency among black boys in part to schools and educators that are not responsive to individual learning styles, as well as to a lack of black men involved in black boys’ early reading experiences. In 2013 the U.S. Department of Education reported that less than 2 percent of teachers were black men. “There are literally young black boys who have never seen a black man reading,” said Irby in a 2017 TED talk, “or never had a black man encourage him to read.” By working with local community partners to organize training for both barbers and parents to teach kids how to read, Barbershop Books works to address this deficit.

Irby and his team stock the barbershops with books that appeal to the kids who visit. A 2013 report from the Cooperative Children’s Book Center at the University of  Wisconsin in Madison showed only 10.48 percent of children’s books published that year featured characters of color, and Irby also notes that a significant number of titles about black children revolve around the same few topics, such as slavery. Although such books are important, he says, it is equally important to supplement those books with more lighthearted stories, like Ezra Jack Keats’s The Snowy Day and Maribeth Boelts’s Those Shoes—books about kids with whom children can identify. (Irby’s own children’s book, Gross Greg, which he self-published in 2016, is a humorous story about a boy who likes to eat what he calls “delicious little sugars”—his boogers.) While Barbershop Books titles aren’t limited to those about black boys, Irby asks boys what kinds of books they would like to read, allowing them to help with the decision of what to stock. The organization also gives books away: On July 18 it will host a giveaway of three thousand books at the Boys’ Club of New York in East Harlem.

Since its founding Barbershop Books has been adopted by more than a hundred barbershops in twenty-eight cities across the United States and reaches more than four thousand boys each month. In the next three years Irby hopes to raise $1 million to set up reading spaces in eight hundred more barbershops throughout the country. Eventually he’d like to expand to include Latino barbershops and digital initiatives as well. For now Barbershop Books has already made an impact. Irby reports that before he launched the program, 73 percent of barbers he spoke with never saw a boy reading in their shop. Now 64 percent say they’ve seen a boy reading a book in their shop almost every day. Irby believes that regardless of children’s reading abilities, it’s a step in the right direction. “Whether or not kids can read the books,” he says, “even if they’re just looking at the pictures, that’s a positive reading experience.”

Christine Ro writes about books regularly for Book Riot and occasionally for Literary Hub, Vice, and other publications.

At the Center of Hip-Hop and Poetry
by LaToya Jordan | News and Trends 4.11.18